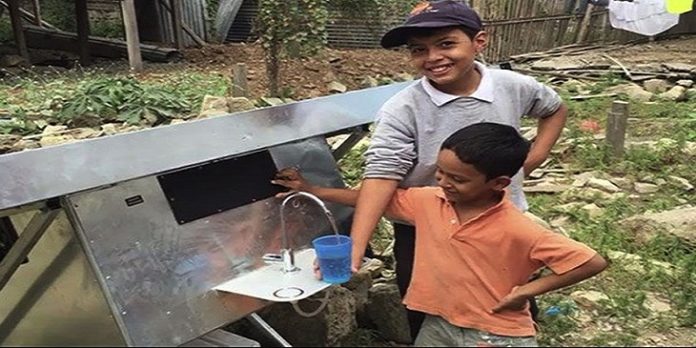 These solar panels are seriously changing the game for both tap water and clean energy.

In an exciting new development, a startup company called Zero Mass Water has created solar panels that passively and efficiently pull water from the sky, purify it, and transport it to the tap for drinking and cooking purposes. Though the primary motivation for creating these panels was to help people living without access to clean drinking water, it can also help a variety of people from all walks of life while conserving traditional energy that is bad for the environment.

The founder and CEO of the startup, Cody Friesen, said he was inspired when he was setting up another one of his technologies in Indonesia and thought about the abundance of rain, but lack of clean water in the region. He decided to focus his efforts on improving the global water supply. Friesen told Fastco Exist:

“Everybody’s heard about the latest nanofilter this…or whatever the latest pump technology is. None of those end up being sort of the leapfrog technology that addresses the fact that drinking water is a fundamental human right, and yet we have one person dying every 10 seconds from waterborne illness on the planet.” Though these are the first solar panels of their kind, the idea and technology behind the water conversion and supply is simple. Zero Mass Water created a material that absorbs water from the air at an extremely accelerated rate, then it draws the water back out to evaporate it and draw out pollutants. After this purification process, the distilled water is run through a mineral block to add calcium and magnesium and to improve the taste.

Since waterborne illnesses are so prevalent, this water can save millions of lives and slowly eliminate diseases, as it becomes more widely-used by countries suffering the most as a result of contaminated drinking water. Having an in-home water supply would also save girls and women worldwide approximately 200 million hours annually, as that’s how much time they spend retrieving water. They could use this time to go to school, perform more tasks around the house, or work.

The solar panels are currently being tested in Ecuador, Jordan, and Mexico to test their viability and effectiveness. Though they’re starting out in areas rampant with poverty, the panels can also make a difference in the lives of the citizens whose water supplies are tainted with lead. There are roughly 5,300 such water systems, and this could be a safe alternative to drinking that lethal tap water and buying bottled water.

A single panel can provide enough clean drinking and cooking water for a family of 4, and additional panels can be used on larger buildings, such as hospitals.

Zero Mass Water hopes that this concept won’t remain novel for too long; despite the success they’re likely to have for being the only sellers of this panel, their goal is to make the technology common throughout all solar panels installed in people’s homes.

This article (New Solar Panels Pull Drinking Water From The Air Because Clean Water Is A Human Right) is free and open source. You have permission to republish this article under a Creative Commons license with attribution to the author and TrueActivist.com