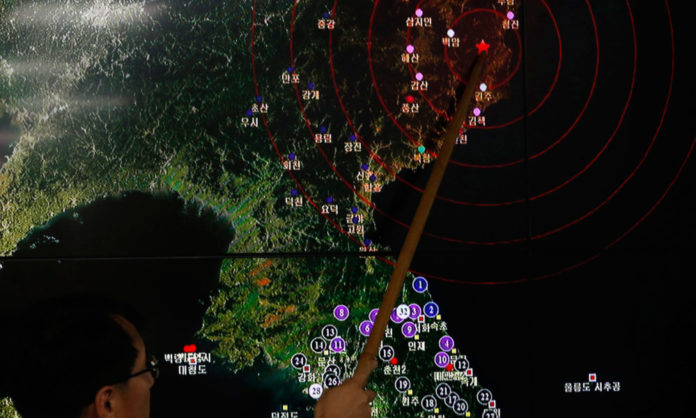 A sensational title to say the least…but maybe we should pay attention, when the article is written by a former CIA Director.

“The mainstream media, and some officials who should know better, continue to allege North Korea does not yet have capability to deliver on its repeated threats to strike the U.S. with nuclear weapons. False reassurance is given to the American people that North Korea has not “demonstrated” that it can miniaturize a nuclear warhead small enough for missile delivery, or build a reentry vehicle for an intercontinental ballistic missile (ICBM) capable of penetrating the atmosphere to blast a U.S. city.”

So, according to Mr. Woolsey, the MSM and others are maintaining some kind of fiction that the North Koreans have not figured out how to deliver a nuclear payload. So, what is the actual truth then?

Eight years ago, in 2008, the CIA’s top East Asia analyst publicly stated North Korea successfully miniaturized nuclear warheads for delivery on its Nodong medium-range missile. The Nodong is able to strike South Korea and Japan or, if launched off a freighter, even the United States.

In 2011, the Director of the Defense Intelligence Agency (DIA), Lt. General Ronald Burgess, testified before the Senate Armed Services Committee that North Korea has weaponized its nuclear devices into warheads for arming ballistic missiles.

On April 7, 2015, at a Pentagon press conference, Admiral William Gortney, then Commander of North American Aerospace Defense (NORAD), responsible for protecting the U.S. from long-range missiles, warned that the intelligence community assesses North Korea’s KN-08 mobile ICBM could strike the U.S. with a nuclear warhead.

Okay, so apparently the North Koreans have actually mastered both warhead miniaturization and the ballistic missile technology needed to deliver an A or H Bomb. But what is the real threat…because delivering one or two nukes on American cities would surely result in the immediate and total destruction of Kim’s country?

“In February and March of 2015, former senior national security officials of the Reagan and Clinton administrations warned that North Korea should be regarded as capable of delivering by satellite a small nuclear warhead, specially designed to make a high-altitude electromagnetic pulse (EMP) attack against the United States. According to the Congressional EMP Commission, a single warhead delivered by North Korean satellite could blackout the national electric grid and other life-sustaining critical infrastructures for over a year—killing 9 of 10 Americans by starvation and societal collapse.”

Two North Korean satellites, the KMS-3 and KMS-4, presently orbit over the U.S. on trajectories consistent with surprise EMP attack.

North Korean then, theoretically has the present capability to basically wipe out the USA with a single EMP nuke. American submarine forces would no doubt then return the favour…so this still sounds like a MAD scenario.

The difference here may well be that the North Korean dictator just might be crazy enough to think it would be cool to watch the world go up like a torch, and billions of people to die, as he sits safely in his bunker surrounded by a clutch of adoring followers and plenty of food, drinks and popcorn.

Maybe we should actually believe him when he publishes his videos showing the US being destroyed by North Korean nuclear weapons. Maybe, because it would never affect him personally, this fantasy is like one giant video game to him.

Sounds like a job for Seal Team Six (or similar)..