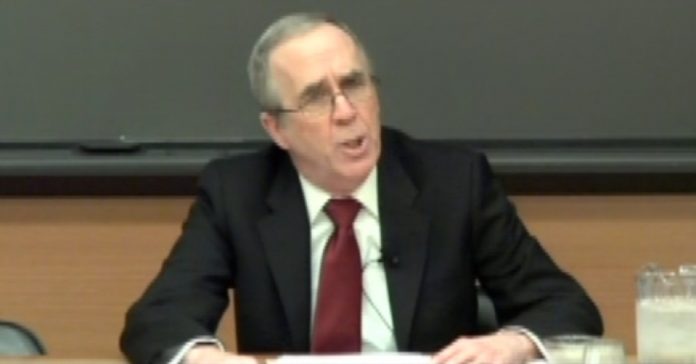 by Nika Knight at commondreams.org

Criticism by agency’s inspector general appears particularly threadbare after internal panel found him guilty of lashing out against employee who came forward.

An intelligence community panel earlier this year found that Ellard had retaliated against a whistleblower, Zagorin writes, in a judgment that has still not been made public.

The finding is remarkable because Ellard first made headlines two years ago when he publicly condemned Snowden for leaking information about the NSA’s mass surveillance of private citizens, wherein Ellard claimed that Snowden should have raised concerns through internal channels. The agency would have protected him from any retaliation, Ellard said at the time.

“We have surprising success in resolving the complaints that are brought to us,” he said.

In Snowden’s case, Ellard said a complaint would have prompted an independent assessment into the constitutionality of the law that allows for the bulk collection of Americans’ telephone metadata. But that review, he added, would have also shown the NSA was within the scope of the law.

“Perhaps it’s the case that we could have shown, we could have explained to Mr. Snowden his misperceptions, his lack of understanding of what we do,” Ellard said.

Yet documents confirmed earlier this year that Snowden had, indeed, reported concerns to several NSA officials—who took no action and discouraged him from continuing to voice concerns. Moreover, as Snowden told Vice News: “I was not protected by U.S. whistleblower laws, and I would not have been protected from retaliation and legal sanction for revealing classified information about law breaking in accordance with the recommended process.”

Ellard’s 2014 criticism of Snowden appears particularly threadbare after he has been found personally guilty of whistleblower retaliation.

[L]ast May, after eight months of inquiry and deliberation, a high-level Intelligence Community panel found that Ellard himself had previously retaliated against an NSA whistleblower, sources tell the Project On Government Oversight. Informed of that finding, NSA’s Director, Admiral Michael Rogers, promptly issued  Ellard a notice of proposed termination, although Ellard apparently remains an agency employee while on administrative leave, pending a possible response to his appeal from Secretary of Defense Ash Carter.

The closely held but unclassified finding against Ellard is not public. It was reached by following new whistleblower protections set forth by President Obama in an executive order, Presidential Policy Directive 19. (A President Trump could, in theory, eliminate the order.) Following PPD-19 procedures, a  first-ever External Review Panel (ERP) composed of three of the most experienced watchdogs in the US government was convened to examine the  issue.  The trio—[Inspectors General (IGs)] of the Justice Department, Treasury, and CIA—overturned an earlier finding of the Department of Defense IG, which investigated Ellard but was unable to substantiate his alleged retaliation.

“The finding against Ellard is extraordinary and unprecedented,” Stephen Aftergood, director of the Secrecy Program at the Federation of American Scientists, told Zagorin. “This is the first real test drive for a new process of protecting intelligence whistleblowers. Until now, they’ve been at the mercy of their own agencies, and dependent on the whims of their superiors. This process is supposed to provide them security and a procedural foothold.”

Ellard served as inspector general of the NSA for nine years, Zagorin notes.

The revelation about Ellard echoes other reports of retaliation against whistleblowers from the internal watchdogs meant to protect them, and further affirms Snowden’s repeated argument that he had no choice but to go public with his mass surveillance leaks.

“More generally,” observes Zagorin, “there are few if any incentives for intelligence whistleblowers to report problems through designated authorities when the IG of [the] NSA is found to have retaliated against such an individual.”