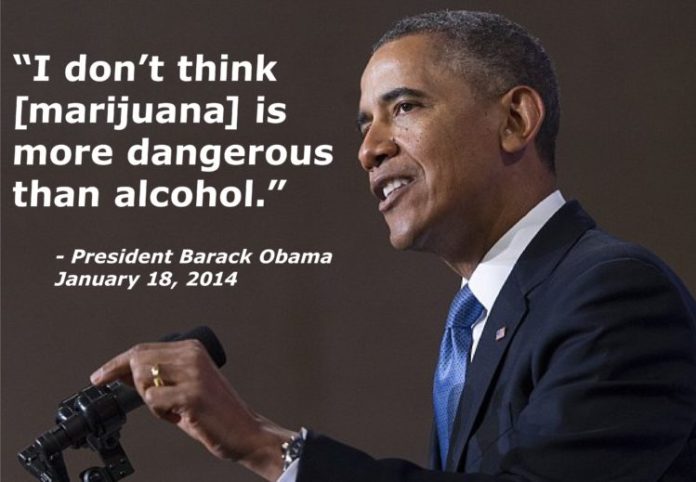 President Barack Obama has told the American biweekly magazine, Rolling Stone in an interview that the United States should treat marijuana just like “cigarettes or alcohol.”

According to Obama, marijuana use should be treated as a public-health issue similar to tobacco or alcohol. He strongly criticized the current federal and some state laws that highly restrict the use of marijuana. By United States federal law, marijuana is illegal irrespective of the reason for its use. The government agency responsible for the regulation of drugs in the country, the Drug Enforcement Administration (DEA), on August 11, 2016, turned down two petitions to lessen federal restrictions on marijuana. One was from the governors of Rhode Island and Washington, and the other from a resident of New Mexico, requesting that marijuana be removed from Schedule I of the Controlled Substance Act (CSA). The removal from schedule I would have ensured that official scientific research is carried out on the plant, across the United States. But the DEA ruled marijuana lacks accepted medical use and has high potential for abuse.

This arrogant behavior by the DEA angered Washington state officials who responded that the state will back scientific research on marijuana, despite the federal ban.

According to the Washington Post, in this confusion and disagreement between the federal agency and the various states wanting to legalize marijuana, Congress could have stepped in to resolve the conflict by amending the federal CSA, but it has declined to do so. “Look, I’ve been very clear about my belief that we should try to discourage substance abuse. And I am not somebody who believes that legalization is a panacea. But I do believe that treating this as a public-health issue, the same way we do with cigarettes or alcohol, is the much smarter way to deal with it,” President Obama told the Rolling Stone Magazine.

President Obama is known to have a soft view on marijuana.  In fact, Obama has confessed to experimenting with recreational marijuana during his youth.  Obama was part of “the Choom Gang,” slang for the smoking marijuana group.

In a 2014 interview with the New Yorker magazine, President Obama said marijuana is less dangerous than alcohol. Even when he was first elected in 2008, marijuana advocates had hoped his succession would give way for the legalization of marijuana across the country. However, marijuana advocates believe that they have been let down by Obama, as he failed to push for the legalization of the plant in his 8-year rule. Obama’s Justice Department has created a policy explicitly allowing states to legalize marijuana as they see fit, but he has made no effort to alter the strict federal prohibition on marijuana that complicates any efforts to create a nationwide legal marijuana industry.

But Obama explained in the Rolling Stone interview that he does not have the unilateral power to make changes to the law as expected by many marijuana advocates.

“Typically how these classifications are changed are not done by presidential edict, but are done either legislatively or through the DEA. As you might imagine, the DEA, whose job it is historically to enforce drug laws, is not always going to be on the cutting edge about these issues,” he said.

President Obama further said that he would be more vocal on the marijuana legalization debate once he leaves office as the president of the United States. He said: “I will have the opportunity as a private citizen to describe where I think we need to go.”

But for many marijuana advocates, Obama is a huge disappointment. Tom Angell of the pro-legalization group Marijuana Majority, said in a statement to the Washington Post that Obama should use his last few days to lobby for changes in the federal laws restricting the use of marijuana in the country. “It would have been very helpful if he had taken more concrete positive action on this issue before it was almost time to vacate the Oval Office. That this president didn’t apply pressure on the DEA to reschedule marijuana this year will likely go down as one of the biggest disappointments of the Obama era,” Tom wrote.

This article (Obama Admits to Rolling Stone Marijuana Should be Treated like ‘Cigarettes or Alcohol’) is a free and open source. You have permission to republish this article under a Creative Commons license with attribution to the author and AnonHQ.com.