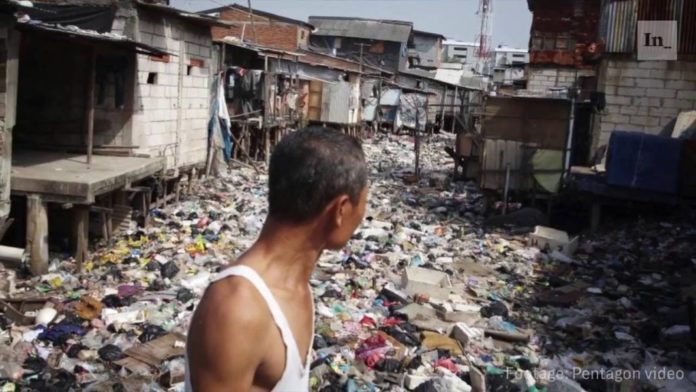 Megacities, climate change, living habitats, dysfunctional social functions and the “remaining 1% represents the threat of 100,000,” are the context of a pentagon sponsored video revealed by The Intercept. The narrator speaks of environments not yet experienced in city landscapes but that are inevitable, with the military requiring an adaptation of urban warfare and a willingness to “drain the swamp of non-combatants” to engage in a “high intensity conflict” with the remaining “adversaries” within.

“Social structures are dysfunctional,” and therefore, alternate forms of governance have taken control, according to the narrator. The military must adapt to the new ways of war and must work within these “ecosystems” with minimal disruption to the non-combatant.

The video, obtained by The Intercept via the FOI Act, is a bizarre documentary produced anonymously for a military audience, to highlight the challenges that will face the military. According to the narrator, this is an inevitable path that the military must set upon – going into a city to engage in  urban warfare.

Nick Turse from The Intercept explains:

“The video was used… for a lesson on ‘The Emerging Terrorism Threat.” JSOU is operated by U.S. Special Operations Command, the umbrella organization for America’s most elite troops… Lacking opening and closing credits, the provenance of “Megacities” was initially unclear, with SOCOM claiming the video was produced by JSOU, before indicating it was actually created by the Army.

“It was made for an internal military audience to illuminate the challenges of operating in megacity environments,” William Layer, an Army spokesperson communicated via e-mail. “The video was privately produced pro bono in spring of 2014 based on ‘Megacities and the United States Army’… The producer of the film wishes to remain anonymous.”


The video, used for the Pentagon’s Joint Special Operations University, is based only 20 years into the future. The Pentagon stance and evaluation is that by 2030, the urban environment will be a threat to national security, becoming incredibly dangerous.

The premise of the documentary is that 20th-century tactics won’t work on the “Megacity,” and by definition, this is a city with a population of 10 million or more. The Pentagon also successfully magnifies the social divide between classes and climate change as two main factors causing this military requirement – and not so funnily enough, Anonymous makes an appearance in the documentary.

According to the video, “Megacities are complex systems where people and structures are compressed together in ways that defy both our understanding of city planning and military doctrine,” says the narrator’s voice. “These are the future breeding grounds, incubators, and launching pads for adversaries and hybrid threats.”

You have catch phrases of “unaligned individuals” working “in the shadows.” But what they’re working for is never mentioned. One thing is for sure when you are watching this awkward stock-photo patch-up, is that the Pentagon’s propaganda for their military displays the world as nothing more than a forever-war that will never cease.

And if you’re still not clear on the message, the narrator of the “Megacities” documentary tells us “This is the world of our future … It is one we are not prepared to effectively operate within and it is unavoidable. The threat is clear. Our direction remains to be defined. The future is urban.”

This article (Pentagon’s Bizarre Future Plans: Megacities and Urban Warfare [Video]) is a free and open source. You have permission to republish this article under a Creative Commons license with attribution to the author AnonWatcher and AnonHQ.com.