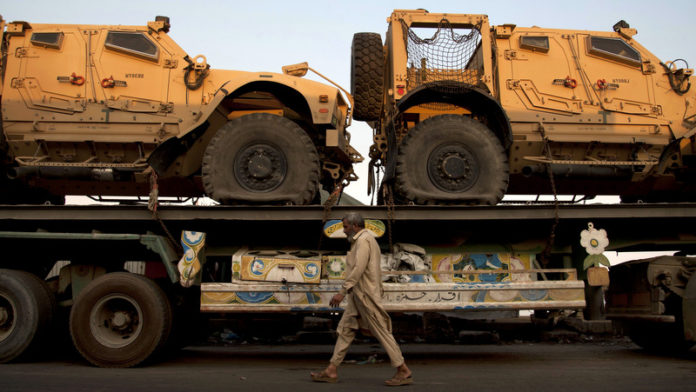 A journalism show aired on HBO for its second season this year, covered a report on the accountability of the American taxpayer funding the U.S. forces in Afghanistan, and the related funding over the past 12 years. The show is interesting to watch as it outlines the cost of the equipment and projects, and the fraud and corruption involved. The scale is mindboggling.

From military aid for Kabul’s fight against the Taliban, to helicopters equipped by Washington, which largely don’t work, according to Cavanaugh in his article examining the waste of the American dollar in Afghanistan and Iraq, the question is raised about the U.S world role, and overall cost. Take the helicopters for example. They are repaired by U.S. contractors Kabul can’t afford to pay without U.S aid. Few pilots are able to fly them, unless trained and paid by the U.S. If they are operational. It encompasses the emergence of a permanent war establishment. Kabul is the tip of a very deep iceberg. According to those like Cavanaugh, this establishment has created an apathy toward foreign policy and military waste of this magnitude. Cavanaugh states,

“What were relatively tiny or non-existent industries before World War II, are today corporate monstrosities with huge public-relations departments that line the pockets of executives, shareholders, politicians and employees across the country. Eisenhower’s warning about the military-industrial complex has clearly come to pass.” [1]

The magnitude I write of is in the trillions of dollars. According to a Harvard study in 2013, the U.S. has spent close to $2 trillion in just Afghanistan and Iraq. The likelihood of this being closer to 6 trillion is more accurate after accounting for scenarios such as disability payments and medical care for veterans.

“As a consequence of these wartime spending choices, the United States will face constraints in funding investments in personnel and diplomacy, research and development and new military initiatives,” the report says. “The legacy of decisions taken during the Iraq and Afghanistan wars will dominate future federal budgets for decades to come…historically, the bill for these costs has come due many decades later…Payments to Vietnam and the First Gulf War veterans are still climbing.”[2]

The outrage lies within the auditing process of the Pentagon. It is the only federal agency not required by law to submit to an annual audit. Since 1996, the audits designed to hold the Pentagon accountable for action and spending, ceased. Here are some figures to ponder:

War profiteering is not a new term. But since post WWII, and more so, Post 9/11, the Military-Industrial Complex has grown into its own insurmountable empire, where U.S. blood is exchanged for oil in a society where the middle class is suffocating and disappearing.

Joachim Hagoplan, a West Point graduate and former Army Officer, who now works as a licensed therapist and author, sums up the expenditure versus loss of life:

“The name of the game is theft. From absurdly overpriced equipment to constant change orders resulting from missing or stolen supplies that “justify” multiplying profit many times over, to sweetheart no-bid contracts, to the bribery of buying off corrupt politicians, to the generals prostituting to Congress for special war toys often enough not needed, to the retired generals becoming arms whores themselves, to products of inferior design that fail to promise on its hype – the war business is an ugly circulating cesspool of the most evil players.”[6] I pose a question: how long can this unsustainable act of wasted dollars continue, before the inevitable U.S Empire economic collapse occurs?