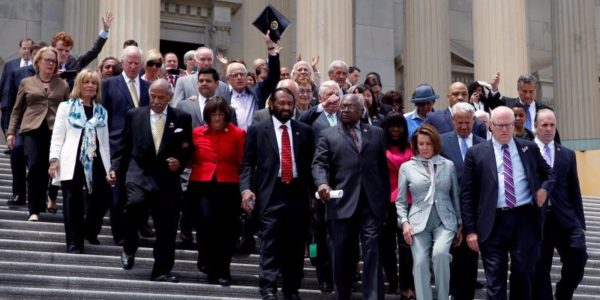 An investigation carried out by the Reuters news agency, claimed that top Congressional leaders of the two main political parties of the United States were briefed by the country’s intelligence officials, that the governing body of the Democratic Party – the DNC – has been hacked by Russian spies.

According to a news report Reuters published August 12th 2016, the congressional briefing was given last summer in a secure room, known as the Sensitive Compartmented Information Facility (SCIF), to a group of congressional leaders informally known as the “Gang of Eight.” The investigation revealed that due to the sensitivity of the information, these Congressional members who were briefed at the SCIF were restricted from telling anyone, including the targets of the hack. They were even made to swear an oath before the briefing.

A United States intelligence official pleading anonymity, told the news agency that the spy agencies in the country had found out that two Russian intelligence agencies – or their proxies – were targeting the DNC and some top officials of the Democratic Party. Other anonymous sources within the intelligence agencies also confirmed that the hackers initially used a hacking technique called “spearphishing,” attacking the private email accounts of the people working for the DNC.

After this technique was successful, the hackers are said to have turned their attention to other top officials of the Democratic Party suspected of backing Hillary Clinton. It is said members of the Democratic Congressional Campaign Committee, which raises funds for House candidates, Hillary Clinton’s presidential campaign and other groups within the party, were targeted.

However, despite the intelligence agencies of the United States claiming to know all these spying activities allegedly perpetrated by the Russians, the information was never leaked to anybody in 2015, apart from the so-called Gang of Eight. It wasn’t until late July 2016 that the FBI said it was investigating a cyber attack at the DNC. When Reuters contacted some DNC officials to ascertain whether it is true about the ignorance of the hack until the Gang of Eight was briefed, they responded affirmatively. The DNC said, it was when an agent from the FBI cyber security squad asked them about the party’s data security arrangements, that they were told their cyber security had been breached. The DNC source said they were told in March 2016. The DNC revealed that even at that time they were told of the hack, the FBI agent never mentioned that the intelligence officials suspected the Russians.  According to the DNC, they heard about the Russian connection when the FBI announced in July, their investigating of a cyber security breach at the DNC. The DNC hacked emails, which were later published by WikiLeaks, made damning revelations on how top officials of the Democratic Party favored Clinton; making sure that she received the nomination of the party. Since the emails were published, it has caused disunity in the party, with many supporters of Bernie Sanders vowing never to vote for Clinton, due to the undue advantage she received ahead of their preferred candidate.

This article (Reuters Investigation Claims Democratic, GOP Leaders Got a Secret Briefing on DNC Hack Last Year) is a free and open source. You have permission to republish this article under a Creative Commons license with attribution to the author and AnonHQ.com.