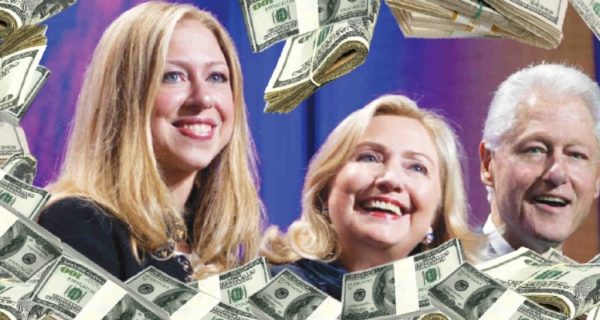 In 1997, the then president of the United States, Bill Clinton, founded the Clinton Foundation. The foundation claims to strengthen the capacity of people throughout the world to meet the challenges of global interdependence.

However, despite the above claim, it has emerged that the foundation is dealing with a company that is disempowering vulnerable people, and worsening their situation in order to make profit.

Although the foundation was founded by Mr Clinton, his wife-Hillary and their Daughter-Chelsea have both found their way into the foundation. Of course the foundation has been supporting Hillary’s presidential ambition. It provides funds and all other support to the Hillary campaign. In an exclusive article published by the Libertarian Republic, it has been revealed that the so-called foundation working to improve people’s lives has received a dubious donation from the notorious Swedish-Canadian oil and mining conglomerate, Lundin Group.

The Lundin Group was founded by the Swedish entrepreneur, Adolf Henrik Lundin. The company engages in oil and gas explorations, as well as mining. War-torn mineral-rich African countries such as the Democratic Republic of the Congo (DRC), South Sudan and Ethiopia are just some of the places the company carries out its activities. “Blood minerals” are related to “blood diamonds,” which are mined in these war zones or sold as commodities to help finance political insurgencies or rebels.

Adolf Lundin reportedly traveled many times to the DRC during the regime of Mobutu Sese Seko, a former brutal and corrupt dictator, to secure mining rights for his company. It was even alleged that he funded one of the sham elections of Mobutu. After the overthrow of Mr Mobutu in 1997 by Laurent Kabila, the Marxist rebel leader, the Lundin Group quickly switched camp to dine with the new rebel government. According to United Nations Inspector Jason K. Stearns, Lundin Group issued a $50 million down payment as part of the $250 million the company would give to the new rebel government in exchange for mining rights in the country. Consequently, Lundin Group won majority rights to one of the country’s richest mineral concessions. Despite the outcry by international human rights groups about the appalling human rights situation in the DRC, Lundin continued its mining operations, destabilizing many poor local residents. Villagers who refused to leave their lands for the mining operations were burnt to death, together with their families, by rebels so that the company could take over. A Swedish non-governmental organization that tracks Swedish business dealings in the developing world, Swedwatch, later released a condemnatory report about Lundin’s operations in the DRC, titled “Risky Business.” The report detailed widespread suffering of local people and killings by rebels in order to secure mining lands for the company.

In South Sudan, Lundin’s activities led to many civilian deaths. The relief organization, Christian Aid documented how the Sudanese military used a brutal killing tactic, known as scorched-earth, to clear villages in order for Lundin to carry out its petroleum exploration. This document was titled, “Lundin Oil in Sudan: Scorched Earth.” Christian Aid confirmed seeing many displaced civilians in areas it had accessed. Christian Aid also said it saw evidence of government troops in trucks and helicopters, burning and killing local residents who refused to leave for Lundin to use their lands.

Accusations of Lundin human rights violations in Ethiopia were so frequent that in 2011, two Swedish journalists went there to investigate. The journalists found all allegations to be true. The journalists were later arrested by the Ethiopian government and charged with terrorism. It was alleged that Lundin pressed for the arrest. The company presumed that the journalists would give it a bad image when they returned to Sweden. They were sentenced to 18 years in jail. The incident surprised many observers around the world. The two were later freed after an international outcry about their charge. In 2001, the then Swedish foreign minister, Anna Lindh, had reflected her government’s regret over the operations of Lundin in Africa. She was quoted as saying: “Lundin Oil activities are negative for Sweden. We expect Swedish companies to respect an ethical code in line with human rights and the environment in which they operate abroad.”

A Swedish prosecutor, mirroring the views of human rights groups, once also characterized Lundin Group as a company filled with “opportunistic, dictator-hugging businessmen.”

Despite all these gross human rights violations, in 2007, Lundin donated a whopping $100 million to the Clinton Foundation. Bill Clinton and his wife gladly accepted the money, and even urged Lundin to donate more. Bill Clinton was quoted as saying: “today’s generous support by the Lundin Group is to be applauded because it demonstrates the potential of this global initiative to capture the imagination and support of the mining sector.” This surprised many observers. Observers said Lundin Group is a company that the Clinton Foundation should have distanced itself from.

Republican House Representative for Pennsylvania, Joe Pitts, who sits on the Tom Lantos Human Rights Commission, was quoted as saying: “areas with high conflict over minerals are breeding grounds for human rights abuses on a massive scale, and when entities like the Clintons’ Foundation accept donations from these corrupt actors, they are sanctioning the exploitation.”

This Article (Revealed: Clinton Foundation Received $100 Million From ‘Blood Minerals’ Company In Sweden) is free and open source. You have permission to republish this article under a Creative Commons license with attribution to the author and AnonHQ.com