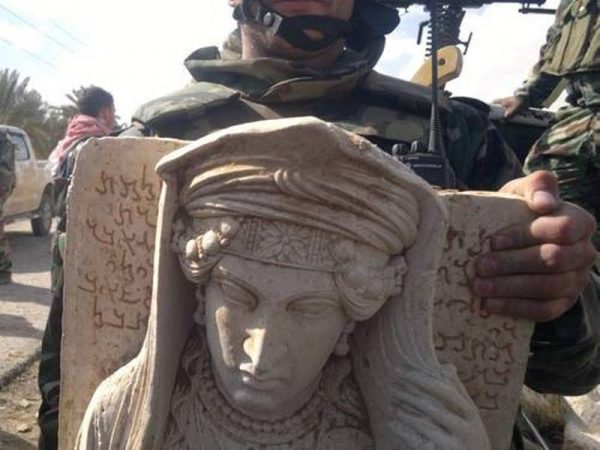 It has emerged that the self-proclaimed Islamic State of Iraq and Syria (ISIS) is smuggling ancient art and artifacts from Syria to sell to buyers from the United States and Europe.

The war in Syria has allowed ISIS fighters to seize territories in the country. In early spring of 2011, a nationwide protest broke out in Syria against President Bashar al-Assad’s government.

The protest soon degenerated into an armed conflict, with rebel forces vowing to remove Assad from power. It has been estimated that between 140,000 and 350,000 people have died so far from the conflict. In March 2015, Al Jazeera estimated that some 10.9 million Syrians—almost half the population—have been displaced, and 3.8 million have been made refugees in other countries.

Due to the instability, Syria has become a stronghold for ISIS. In a special documentary by RT English News, it was revealed that the jihadist group is selling ancient art and artifacts stolen from Syria to Western buyers, and is using the money to fund their terrorist activities. A document from ISIS’s Ministry of Natural Resources, which was seen by the documentary crew, revealed that the militants transport the stolen artifacts out of Syria via Turkey, where they get middlemen to market the items to buyers from the West.

By rough estimate, ISIS currently controls about 4,000 archaeological sites in Syria. When the militants seized these sites from the government, they looted and destroyed the sites, prompting the United Nations Cultural Agency to call for action to stop the militants from causing havoc. It is believed that ISIS has made millions of dollars by selling the artifacts to Western buyers.

It is estimated that the militants make up to $200 million per year from this illegal trade. ISIS first seized some of the archaeological sites in 2013.

Due to the prevalence of the illegal trade, observers have expressed concern, urging governments in the West to implement laws that will ban their citizens from buying the artifacts from the militants.

It is said that the United States Congress has already voted to ban imports of all ancient art and artifacts from Syria in an effort to discourage the illegal trade by ISIS and other jihadist groups.

However, President Barack Obama has refused to sign the bill passed by Congress. It is unclear why Obama is not willing to sign the bill. But according to observers, Obama’s attitude towards the bill has raised eyebrows and suspicions among conspiracy theorists who believe that the United States is covertly funding ISIS.

The World Customs Organization has said that similarities between artifacts from the Near and Middle East have created difficulty in identifying illegally obtained relics, making it difficult for the organization to intervene to save the situation.

The European Parliament Committee on Culture and Education, in collaboration with UNESCO, had promised to set up appropriate measures to stop European citizens from buying the artifacts from the militants, but that promise is yet to materialize. As it stands now, ISIS is making huge sums of monies from selling the artifacts, and is using the monies to buy weapons to attack Western citizens, both at home and abroad.

This Article (Revealed: ISIS Is Smuggling Artifacts From Syria For Buyers From United States And Europe [Video]) is free and open source. You have permission to republish this article under a Creative Commons license with attribution to the author and AnonHQ.com