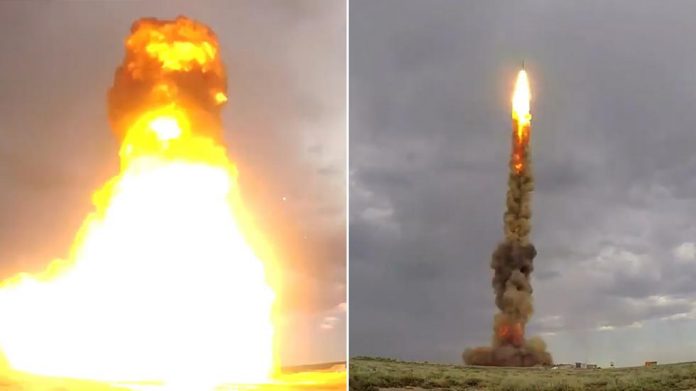 (Zero Hedge) The Russian Ministry of Defense announced Tuesday it had successfully tested a new anti-missile system in Saryshagan firing range in central Kazakhstan, as shown by a video released by the MoD.

Though the MoD did not disclose any further information about the test, including the precise type of next generation weaponry featured in the video, the military and Middle East affairs news site Al-Masdar identified it as the A-235 so-called “Satellite Killer” based on visual similarities to a prior publicized A-235 test from last year.

“The anti-missile system shown in the video is believed to be an A-235 Nudul (‘satellite killer’); it was first unveiled in 2014. The A-235 is supposed to succeed the A-135 Amur, which is still in service,” according to the report.

The Russian Aerospace Defense Forces oversaw the tests which a defense ministry spokesman described as follows: “The new anti-ballistic missile, after several trials, has reliably confirmed its characteristics and successfully fulfilled the task by striking an assigned target with precision,” according to TASS.

Other Russian media sources described it only as a “new interceptor missile” – which also comes just as the S-500 ‘Prometheus’ is being prepped for delivery to operational units.

The A-235 is part of the Kremlin’s developing supersonic arsenal, reaching supersonic speeds which are several times faster than an average rocket.

Prior tests and capabilities of the A-235 were described previously by The National Interest:

Russia has been preparing a purpose-built ASAT missile, the A-235 Nudol, for years, development of which has already included seven flight tests. The latest, on December 23, 2018, appeared highly successful, with the missile flying for seventeen minutes and 1,864 miles before splashing into its intended target area at sea. Described by Russian state-media as part of a new “space defense intercept complex,” the Nudol’s flight tests suggest an orbital ballistic intercept trajectory ideal for ASAT operations.

Russia is carrying out and highly publicizing these tests at a moment when the fate of key international weapons treaties hang by a thread, especially the now all but collapsed Intermediate-Range Nuclear Forces and the New START nuclear arms reduction treaty between Russia and the United States.