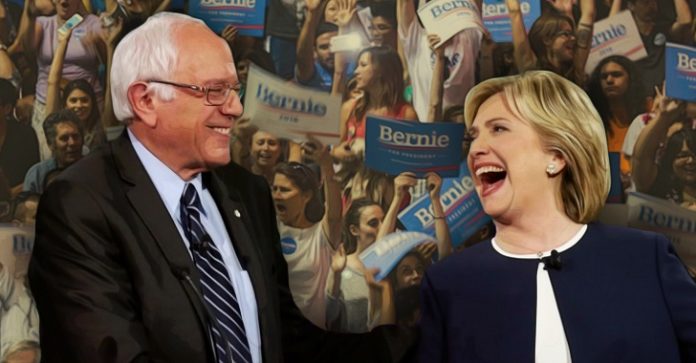 “Our goals in the coming months will be to frame the Republican field and the eventual nominee early and to provide a contrast between the GOP field and HRC,” reads an email dated May 26, 2015, referencing the former secretary of state by her initials, posted by “Guccifer 2.0” — after the Romanian hacker who allegedly accessed Clinton’s private email server multiple times.

One of the strategies listed for “positioning and public messaging” states, “Use specific hits to muddy the waters around ethics, transparency and campaign finance attacks on HRC.”

DNC was pushing HRC as candidate from May, 2015 of last year. #Guccifer2 pic.twitter.com/0rJcTspOvl

As the mainstream largely directed attention to the hack of the Democratic National Committee’s strategy to oppose Donald Trump, this collusion to steer the narrative in Hillary’s favor appears to have gone unnoticed, asUS Uncut reported. But this series of leaked emails show a meticulously plotted coordination between DNC narratives touting Clinton, rather than Sanders, as if she had been the presumptive nominee from the outset — precisely as activists and fair elections advocates had suspected.

Under the heading “Tactics,” the document states, “Working with the DNC and allied groups, we will use several different methods to land these attacks” — including, under the subheading, “Reporter Outreach”:

“Working through the DNC and others, we should use background briefings, prep with reporters for interviews with GOP candidates, off-the-record conversations and oppo pitches to help pitch stories with no fingerprints and utilize reporters to drive a message.” And under “Bracketing Events,” the email states: “Both the DNC and outside groups are looking to do events and press surrounding Republican events to insert our messaging into their press and to force them to answer questions around key issues.”

Most revealing in this particular document is its conclusion, which reads, in part, “Our goal is to use this conversation to answer the questions who do we want to run against and how best to leverage other candidates to maneuver them into the right place.”

Guccifer 2.0 also leaked a two-page list titled “HRC election plans,” which, as US Uncut noted, includes a talking point that later appeared word for word in Clinton’s video announcement of her bid to run for president:

“Americans have fought their way back from tough economic times but the deck is still stacked for those at the top.”

Not only does this show a carefully-orchestrated spoonfeeding of vapid Clinton-isms to the ostensibly unsuspecting public, the irony of the former First Lady pontificating on ‘stacked decks’ for the elite bears a startling degree of hypocrisy in this context.

Prior to the release of these hacked documents, an analysis of election coverage by Neal Gabler, published inTruthout, evidenced startling favoritism for Clinton by the mainstream media throughout the 2016 election season thus far. While not entirely overt, the media’s fondness for Hillary often comprised propagandic semantic gymnastics to avoid showing Sanders in a rosy light.

Even as Sanders experienced growing success, the media downplayed its extent through comparisons with Trump — characterizing the two as ‘outsider’ candidates — thus creating a psychological parallel between the Vermont senator’s popularity and the demagoguery of the contentious billionaire.

Eventually, as Sanders continued to experience success despite a veritable media blackout, a few mainstream outlets resorted to outright hostility to achieve a pro-Clinton message. As Anti-Media previously reported,Newsweek’s Kurt Eichenwald published a scathing hit piece on not only Sanders, but his supporters, titled “Get Control, Senator Sanders, or Get Out.”

“So, Senator Sanders,” Eichenwald patronizingly penned, “either get control of what is becoming your increasingly unhinged cult, or get out of the race.”

To say the corporate, mainstream media has been complicit in a coordinated effort to grant Hillary the nomination would be an egregious understatement of reality. Though irate voters and journalists with actual integrity across the country immediately called out the Associated Press’ premature announcement Clinton had won the nomination as farce, it’s clear — particularly with these leaked emails — that had been the end game from the outset.

US Uncut reported neither the DNC nor the Clinton campaign returned request for comment.

DNC chair Debbie Wasserman Schultz’ even rebuffed claims Sanders had not received fair treatment in the press during an April interview with the Daily Show’s Trevor Noah:

“You know, as powerful as that makes me feel, I’m not doing a very good job of rigging the outcome, or … blocking anyone from being able to get their message out.”

Evidence, however, would beg to differ.

This article (Sanders Supporters Vindicated: Proof DNC Used Media to Rig Election for Hillary) is free and open source. You have permission to republish this article under a Creative Commons license with attribution to Claire Bernish and theAntiMedia.org. Anti-Media Radio airs weeknights at 11pm Eastern/8pm Pacific. If you spot a typo, email [email protected].