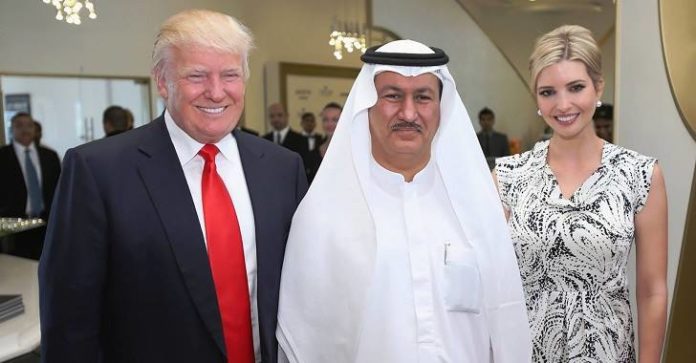 President Donald Trump’s decision to bar nationals from seven predominantly Muslim countries from entering the United States for 90 days prompted one of the largest protests America has seen since anti-Iraq war sentiment compelled thousands to hit U.S. streets in 2003.

Moved by the ban’s inclusion of green card holders who were suddenly left stranded at U.S. airports, protesters flooded airports nationwide, demanding U.S. officials let foreigners who were lawful residents in. On Sunday evening, Secretary of Homeland Security John Kelly declared “the entry of lawful permanent residents to be in the national interest,” making the “lawful permanent residence status” of foreign nationals “a dispositive factor in our case-by-case determinations.”

While many have pointed out that the precedent that allowed Trump to impose the 90-day ban came from a bill signed into law by President Barack Obama, known as the Visa Waiver Program Improvement and Terrorist Travel Prevention Act, others pointed out the list’s omission of countries such as Saudi Arabia, “home of 15 of the 19 terrorists involved in the 9/11 attacks.” But while these same publications claim these countries were spared because of Trump’s business ties, countries listed in the current ban mirror the list of countries present in the bill signed into law by Obama. So why did both Obama and Trump choose to spare travelers from Saudi Arabia, Qatar, and United Arab Emirates from extra scrutiny?

The answer may lie somewhere in the past, long before both Obama and Trump were considering running for president.

U.S. presidents are often judged by how the economy fares during their terms, leading many to take credit for sudden upticks while others blame everybody else for downfalls.

In a carefully written piece from 2014, founder, president, and Executive Director of the Carl Menger Center Paul-Martin Foss explains that in 1971, when President Richard Nixon “[closed] the gold window,” unilaterally canceling the convertibility of the U.S. dollar to gold, Saudi Arabia entered the picture.

Striking a deal with the Saudi Kingdom, Nixon established the oil-rich nation as its partner. From then on, Saudi Arabia became the “anchor of the petrodollar system,” making the kingdom’s demise unthinkable if the dollar were to remain a reserve currency.

Fearing the dollar would lose its value due to his economic policies regarding gold reserves, Nixon made the Saudis promise to “denominate oil sales in dollars” in exchange for America’s endless military protection. Being one of the world’s top oil producers and exporters, Saudi Arabia’s promise meant that foreign nations “seeking to purchase oil on international markets needed to purchase dollars and maintain dollar reserves.” By establishing a demand for the dollar “as an international reserve currency that counteracted the desire of countries to move away from the dollar due to the [U.S.] government’s inflationary policies of the 1960s and 1970s,” Nixon was able to protect the value of the U.S. dollar despite the obliteration of the only system that had kept the currency strong all through the years: the gold standard.

Since then, this relationship has kept the U.S. dollar relatively strong despite the U.S. Federal Reserve’s follies, which have accelerated inflation. This adds an extra burden on the poor, who have continued to see the purchasing power of their cash decline over the decades. But who cares about the poor when the U.S. government can keep printing more money without worrying about having the currency lose its power?

Over the years, other oil-rich nations joined the pact, with Gulf Arab countries like the UAE, Qatar, Bahrain, and Kuwait maintaining large dollar reserves.

According to a 2016 Bloomberg article, Saudi Arabia still holds $289 billion of U.S. Treasury debt. But aside from that, Foss continues in his piece, “the estimated sizes of the Arab countries’ sovereign wealth funds” totals almost $2.5 trillion. These wealth funds invest their oil revenues across the globe, holding America in a special place in their hearts.

Yemen, Obama, Saudi Special Relationships, and How Trump Is Now Part of This Mess

As a new president takes office, we can only guess what the learning process might look like. We’re not sure who approached Obama to let him know of the U.S. special relationship with the Saudi royals. We’re also not sure how this happened under Trump. All we know is that under Obama’s watch, the Saudis purchased $115 billion worth of weapons from America, totaling “more than any previous administration and were intended to replenish arsenal after war in Yemen.”

In the Yemen files, the database “of more than 500 documents from the United States embassy in Sana’a, Yemen” released by WikiLeaks, the staff at the whistleblower hub writes that “Yemen is of significant strategic interest as [the country] controls a narrow choke-point to the Red Sea and the Suez Canal through which 11% of the world’s petroleum passes each day.” With Saudi Arabia seeking to “control a port in Yemen to avoid the potential constriction of its oil shipments by Iran along the Strait of Hormuz or by countries, which can control its other oil shipment path along the Red Sea,” it’s suddenly clear why America has been so invested in the Yemen war. The U.S. government must keep the promise made by President Nixon if it wants to keep the dollar strong without reforming or putting an end to the Federal Reserve’s grip on the U.S. dollar.

President Trump has only been in office for a little over a week, and he’s already following the lead of his predecessors.

Understanding the background of the special relationship between America and Saudi Arabia gives us an idea of why economic policies of the past are so entwined with wars being waged today — and why Saudi Arabia and others were left out of the list of countries under the watch of the U.S. government under Obama and Trump.

As over seven million people starve to death in Yemen while America presses on, aiding its number one partner in the region. But this is not because they care about the war itself, but because American presidents care about the strength of the dollar — at least, that’s what it looks like once you analyze the background of this special relationship.

Without oil-rich nations using the U.S. dollar to trade their product — and without the gold standard — there’s nothing keeping the dollar’s worth from crashing. And if that occurs, world markets would feel the boom with only America truly hurting since its currency would lose its worth, boosting other world powers.

Will there ever be a president who will challenge that? If so, reform should start first by ending the Federal Reserve.

This article (Saudi Arabia, Yemen, and What You’re Not Being Told About Trump’s Travel Ban) is free and open source. You have permission to republish this article under a Creative Commons license with attribution to Alice Salles and theAntiMedia.org.