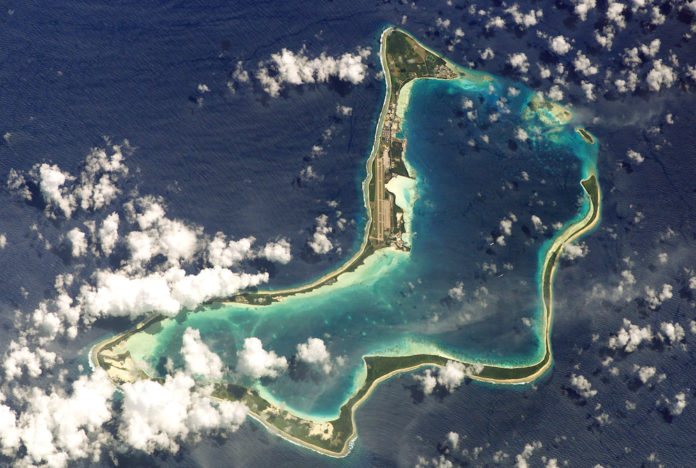 First, they tried to shoot the dogs. Their aim must have been piss, because next, they tried to poison them with strychnine. After both of these attempted killings failed, British government agents and US Navy personnel used raw meat to lure the pets into a sealed shed. Much like a miniature mock-Nazi ritual, they gassed the howling animals with exhaust fumes piped in from US military vehicles. Then they burned the dogs’ carcasses as their owners were forced to watch on.

The lie is that the United States built its base on an “uninhabited” island. They tried to cover for this by secretly exiling the indigenous people from the Chagos Archipelago when the base was built. Although their ancestors had lived there since the time of the American Revolution, officials decided, as one wrote, to “maintain the fiction that the inhabitants of Chagos [were] not a permanent or semi-permanent population,” but just “transient contract workers.”

The same official summed up the situation bluntly: “We are able to make up the rules as we go along.”

Between 1968 and 1973, American officials conspired with their British colleagues to remove the Chagossians. They hid the exodus from Congress, Parliament, the UN, and the media.

During the deportations, British agents and members of a US Navy construction battalion rounded up and killed the islanders’ dogs.

Their owners were then deported to the western Indian Ocean islands of Mauritius and the Seychelles, 1,200 miles from their homeland, where they received no resettlement assistance.

More than 40 years after their expulsion, Chagossians generally remain the poorest of the poor in their adopted lands, struggling to survive in places that outsiders know as exotic tourist destinations.

During the same period, Diego Garcia became a multibillion-dollar Navy and Air Force base, and a central node in US military efforts to control the Greater Middle East and its oil and natural gas supplies. The base, which few Americans are aware of, is more important strategically and more secretive than the US naval base-cum-prison at Guantánamo Bay, Cuba.

Unlike Guantánamo, no journalist has gotten more than a glimpse of Diego Garcia in more than 30 years. It was from here that they waged the Gulf War, the 2003 invasion of Iraq, the US-led war in Afghanistan, and the current bombing campaign against the Islamic State in Syria and Iraq.

Following years of reports, which claimed that it was a CIA “black site” for holding terrorist suspects and years of denials by US and British officials, they had to come clean: “Contrary to earlier explicit assurances,” said Secretary of State for Foreign and Commonwealth Affairs David Miliband, Diego Garcia had indeed played at least some role in the CIA’s secret “rendition” program. Surprise surprise, the horrid origin of this site is a testament to its current usage.

Last year, British officials claimed that flight log records, which might have shed light on those rendition operations, were “incomplete due to water damage” thanks to “extremely heavy weather in June 2014.” A week later, they suddenly changed their story, saying that the “previously wet paper records have been dried out.”  Two months later, they insisted the logs had not dried out at all and were “damaged to the point of no longer being useful.”

Contradicting this statement is the British government’s own weather data, which indicates that June 2014 was an unusually dry month on Diego Garcia. A legal rights advocate said British officials “could hardly be less credible if they simply said ‘the dog ate my homework.’” Lies and more lies…

In a macabre attempt at irony, the US military has given the base the nickname: the “Footprint of Freedom.”

Pentagon and State Department officials insisted that Chagos comes under their “exclusive control (without local inhabitants),” embedding an expulsion order in a polite-looking parenthetical phrase. US officials wanted the islands “swept” and “sanitized.” British officials appeared happy to oblige, removing a people one official called “Tarzans.”

This plan was confirmed with an “exchange of notes” signed on December 30, 1966, by US and British officials, as one of the State Department negotiators told David Vine, reporter for The Nation. The notes effectively constituted a treaty but required no congressional or parliamentary approval, meaning that both governments could keep their plans hidden.

Within a few confidential minutes, the United States agreed to secretly wipe out a $14 million British military debt, circumventing the need to ask Congress for funding. In exchange, the British agreed to take the “administrative measures” necessary for “resettling the inhabitants.”

Those measures meant that, after 1967, any Chagossians who left home for medical treatment or a routine vacation in Mauritius, were barred from returning. Soon, British officials began restricting the flow of food and medical supplies to Chagos. As conditions deteriorated, more islanders began leaving.

In briefing papers delivered to Congress, the Navy described Chagos’s population as “negligible,” with the islands being, “for all practical purposes… uninhabited.” In fact, there were around 1,000 people on Diego Garcia in the 1960s, and 500 to 1,000 more on other islands in the archipelago.

The authorities soon ordered the remaining Chagossians—generally allowed no more than a single box of belongings and a sleeping mat—onto overcrowded cargo ships destined for Mauritius and the Seychelles. By 1973, the last Chagossians were gone. At their destinations, most of the Chagossians were literally left on the docks, homeless, jobless, and with little money. In 1975, two years after the last removals, a Washington Post reporter found them living in “abject poverty.”

Within two months, two of her children were dead. The second was buried in an unmarked grave because she lacked money for a proper burial. Aurélie experienced fainting spells herself and couldn’t eat. “We were living like animals. Land? We had none… Work? We had none. Our children weren’t going to school.”

In 2001 and 2002, most Chagossians joined new lawsuits in both American and British courts demanding the right to return, and proper compensation for their removal and for resettling their islands. The US suit was ultimately dismissed on the grounds that the judiciary can’t, in most circumstances, overrule the executive branch on matters of military and foreign policy. In Britain, the Chagossians were more successful. In 2002, they secured the right to full UK citizenship. Over 1,000 Chagossians have since moved to Britain in search of better lives. Twice more, British courts ruled in the people’s favor, with judges calling the government’s behavior “repugnant” and an “abuse of power.”

On the government’s final appeal, however, Britain’s then-highest court, the Law Lords in the House of Lords, upheld the exile in a 3-2 decision. The Chagossians appealed to the European Court of Human Rights to overturn the ruling. Before the European Court could rule, the British government announced the creation of the world’s largest Marine Protected Area (MPA), in the Chagos Archipelago.

They made the announcement on April Fool’s Day 2010, which was a clue to their true intentions, which were certainly more than environmentalism. The MPA banned commercial fishing and limited other human activity in the archipelago, endangering the viability of any resettlement efforts.

WikiLeaks then released a State Department cable from the US Embassy in London, quoting a senior Foreign and Commonwealth Office official saying that the “former inhabitants would find it difficult, if not impossible, to pursue their claim for resettlement on the islands if the entire Chagos Archipelago were a marine reserve.” US officials agreed. According to the embassy, Political Counselor Richard Mills wrote, “Establishing a marine reserve might, indeed… be the most effective long-term way to prevent any of the Chagos Islands’ former inhabitants or their descendants from resettling.”

Not surprisingly, the main State Department concern was whether the MPA would affect base operations. “We are concerned,” the London Embassy noted, that some “would come to see the existence of a marine reserve as inherently inconsistent with the military use of Diego Garcia.” British officials assured the Americans there would be “no constraints on military operations.”

Although the European Court of Human Rights ultimately ruled against the Chagossians in 2013, this March, a UN tribunal found that the British government had violated international law in creating the Marine Protected Area.

Meanwhile, the European Parliament has passed a resolution calling for the Chagossians’ return, the African Union has condemned their deportation as unlawful, three Nobel laureates have spoken out on their behalf, and dozens of members of the British Parliament have joined a group supporting their struggle

Almost a quarter-century later, nothing has yet been done. In 2016, the initial 50-year agreement for Diego Garcia will expire. While it is subject to an automatic 20-year renewal, it provides a two-year renegotiation period, which commenced in late 2014.

Unfortunately, Aurélie Talate, will never see the day when her people go home. Like others among the rapidly dwindling number of Chagossians born in the archipelago, Aurélie died in 2012 at age 70, succumbing to the heartbreak that is sagren.

Remember Aurélie. Remember the Chagossians. We do not forget.

This Article (More Secret Than Guantanamo: The Military Base They Destroyed A Culture To Build) is free and open source. You have permission to republish this article under a Creative Commons license with attribution to the author and AnonHQ.com.