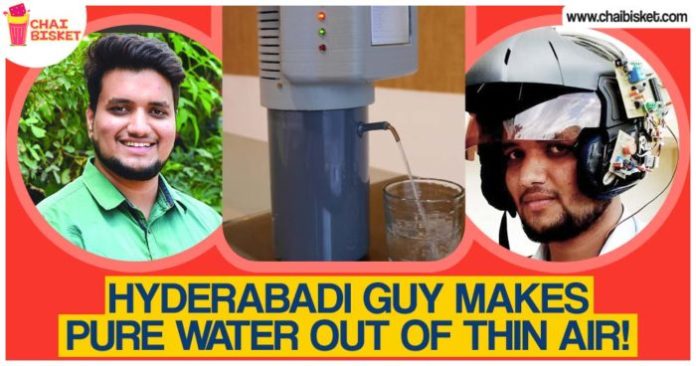 We are increasingly witnessing a surge in wonderful, but very simple innovations that aim to make our everyday life easy for us.

Many startups have concentrated on clean energy, furthering the step in the already available opportunity in the renewable energy sector.

Others too, have invested their knowledge in how to use alternative ways to create water, one of the basic necessities of life. Water is becoming scarce around the world. The United Nations has already sounded an alarm on an imminent water shortage. According to the world’s governing body, more than 2.9 billion people in 48 countries will face water shortages in the next 10 years. Water experts say it could destabilize and jeopardize the existence of some countries.

To solve this obvious problem, we need an impressive innovation that will ensure that we no longer fully depend on our traditional sources for water. And this is exactly what a young man from India has done. Jawwad Patel is a 22-year old engineering student. He has invented a simple device known as Dewdrop, which is capable of trapping moisture in the atmosphere, creating 2 liters of clean and safe drinking water every hour.

Patel said the motivations for inventing the Dewdrop came from a disturbing situation he witnessed during his tour to a small town of Latur, in the state of Maharashtra. Residents in the town were living without clean drinking water. The Latur experience encouraged Patel to commence work on the Dewdrop, with it mind to help the Latur residents.

The Dewdrop is just a bottle that fills and refills by itself. The device sucks in air using a fan, filters dust, condenses moisture using the Thomson and Peltier effect, mineralizes water, and stores it for drinking. It is a 3D printed device.

Dewdrop weighs around the 900-gram mark, making it easy to carry. The device is powered by a 12V 6000 mAh Li-ion battery and generates around 2 liters per hour of potable drinking water. Even in desert areas, where the air is relatively dry, the Dewdrop can still generate up to 1.2 liters of water per hour. This is indeed very encouraging.   Patel has devised the interface of his device to control its operation, including sensors which detect humidity, temperature and other factors. In many places around the world, water becomes very scarce during the dry season. However, the hydrological cycle makes sure that a substantial quantity of water is present in the Earth’s atmosphere, in the form of water vapor anywhere. This makes Patel’s Dewdrop suitable everywhere in the world.

Apart from serving the water needs of people living in small villages, it is also suitable for people who trek mountains, camp in deserts and forests, fish in the sea, and work in mines or remote areas.

According to Patel, he is still modifying the device. He wants to incorporate a solar cell to power the device, eliminating the Li-ion battery. He will also include options that allow users the choice to have either their water hot or cold. Patel is also working on other inventions, including a fully powered solar car. Patel is not the first person to invent a device that can trap water from the atmosphere. Recently, we published an article about a similar invention, developed by VICI-Labs and a team of researchers from the University of California, Berkeley. The device, named WaterSeer, is capable of generating up to 11 gallons of clean and safe drinking water from the atmosphere and is only powered by the wind.

This article (Simple 3D Water Printer Capable of Creating 2 liters of Drinking Water Every Hour from the Air [Video]) is a free and open source. You have permission to republish this article under a Creative Commons license with attribution to the author and AnonHQ.com.