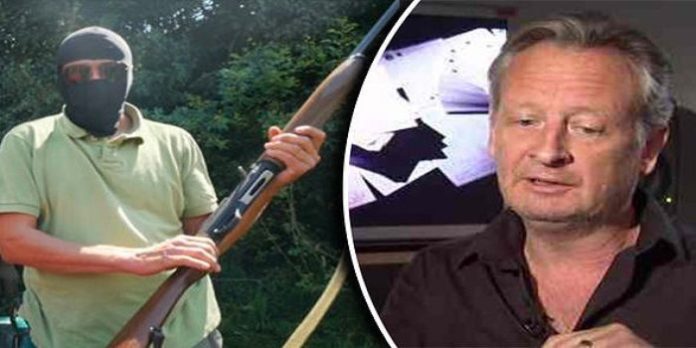 A Sky News journalist, Stuart Ramsey has found himself center of attention after Romanian officials attacked his media outlet for falsifying an illegal arms deal in a terror report, calling it “staged.” Chief correspondent Stuart Ramsay is a prominent multi-award winning journalist, also receiving BAFTA and Emmy nominations for his reporting on the Taliban.

Ramsay’s undercover investigation, under Sky News sponsorship, exposed shocking deals with ISIS terrorists and arms trading in Europe. Reportedly, shipped weapons made their way through the loose Schengen zones (there are little to no border checks between countries) after leaving Ukrainian borders.

Although Romania is not part of the Schengen zoning of the EU, according to reports by Ramsay, the borders still remain lax, making up the content of his ‘explosive’ article about Romania being the perfect location to conduct such weapons smuggling.

Ramsay stood in front of the camera for Sky News with the supposed arms dealers in the background, handling an array of firearms.

Since the airing of the report, Romanian Prime Minister Dacian Ciolos has slammed Ramsay’s credibility, saying it was “unacceptable to denigrate a country without proof.”

Organized criminal prosecutor, Daniel Horodniceanu, according to the Express UK, stated the report presented by Ramsay was “setup by British journalists.” For the ‘arms dealers’ appearing in the report, Sky News offered in excess of £5,000.

According to the Directorate for Combatting Organized Crime and Terrorism (DIICOT), which is in charge of the investigation, “Their action [Sky News] is putting at risk Romania’s national security by misinforming an international audience about the Romanian authorities’ capacity to prevent arms trafficking.”

Business Review conducted their own feature, analyzing the “holes” in the Ramsay report, which included the months of negotiating the report – uncovered to be a month – and the AK-47 displayed was in fact, a legally owned collectors rifle by the “fixer of the story,” Aurelian-Mihai Szanto, and his cousin.

Three men, who were involved with the Sky News report, Aurelian-Mihai Szanto included, have been arrested and detained for their participation in the report – not for arms trafficking but for helping to falsify the journalistic investigation. The DIICOT is now seeking the Sky News’ journalists for a pending hearing.

In response to the outcry by Romanian officials, Ramsay set his own passive-aggressive attacks on his Twitter feed, telling those accusing him to calm down and that the report was accurate.

Ok I’m genuinely laughing. Why would anyone faces charges for exposing a fact? It’s real. Wake up.

Ha! Calm down everyone. Story is true. Nobody paid. Nobody scripted. Weapons real. Arrests happening. Govt embarrassed. Deal with it.

PR Manager for Sky News, Lucy Ellison also backed the journalist. Ellison released a statement to the press that Ramsay’s reporting was “robust” and that Sky News “stand[s] by the story.”

The Sky News feature was aired on television August 7.

This article (Sky News Award Winning Correspondent Stuart Ramsay Accused of Falsifying Terrorist Report, Romanian Officials may Prosecute) is a free and open source. You have permission to republish this article under a Creative Commons license with attribution to AnonWatcher and AnonHQ.com.