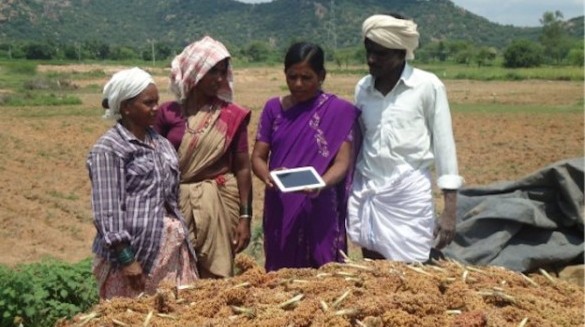 In many developing and emerging economies, the agriculture sector serves as a significant source of employment for majority of the population. Especially for rural dwellers; it is their only source of employment. They grow crops and rear animals, primarily for subsistence. Those who are able to, expand their produce and sell the little they have to the market, in order to get little money to take care of other needs. Because governments in some of these emerging nations have failed to develop a holistic policy for the agriculture sector, farmers have no choice than to depend on nature for their crops and animals. Therefore, farmers are left to their fate. They spend the whole year working in their farms, but gain nothing substantial. Due to the rapid changes in the weather pattern around the world, these farmers face a great challenge.

In a rural village of Kommireddipalli in the southern State of Telangana, India, the story is pathetic. Many farmers in the area over the years, have struggled to make ends meet. Those who cannot cope with the situation, end up taking their own lives. The Hans India reports that many of the suicides among farmers in the Telangana area, are as a result of crop failure. When there is crop failure, it means farmers will not be able to provide for themselves and their families. Farmers, especially the men, therefore see suicide as the only solution to solve the problem. However, the state government in the Telangana area is now providing support to farmers to avert them from these calamities. The Telangana government has recruited a nonprofit organization – International Crops Research Institute for the Semi-Arid Tropics (ICRISAT), to train farmers in drought-susceptible regions, so that the farmer can develop preemptive agrarian practices. As ICRISAT started its work in the state, a self-help collective of female farmers, known as Adarsha Mahila Samakhya (AMS), also volunteered to join the campaign to improve the lives of farmers in the area. Together, ICRISAT and AMS established Village Knowledge Center (VKC) in each village, in the state. The VKC is a kiosk which gives local farmers the opportunity to operate mobile devices and computers, extracting agricultural information from static websites. Farmers were eager to familiarize themselves with the new technology. But there was a problem. The text of the websites was entirely in English, a language foreign to them. And to even compound the problem, many of the farmers are illiterates. They cannot read the text and understand any language. This was the greatest challenge for ICRISAT and AMS officials.

It was at this stage that a company called GreenSIM appeared, to help. GreenSIM is specifically designed to optimize agricultural prosperity in developing countries. The device leverages the core functions of a SIM card (transmitting calls and texts) to deliver free voice messages to farmers, offering updates relating to growing and selling crops. To animate the product, ICRISAT equipped a group of about 7,000 farmers with GreenSIM-activated cell phones and began to draft text messages discussing weather, soil fertility, pest problems and crop pricing, based on reports from the Indian Meteorological Department and data collected in villages throughout Telangana. With this information now available to the farmers, all they need to do is to follow the instructions. The voice messages are delivered to them in their own local language. The initiative is now changing their lives.

Farmers who used to struggle to make around $80 to $310 per harvest are now making about $1,853 to $2,155. They can now afford to take their children to school, and provide other basic needs for their lives. The suicide rate is dropping fast; there is a real change now. Officials of the initiative are hoping to extend it to other parts of India soon.

We sourced the article from Ars.

This article (Small Idea, big Difference: A Simple SIM Card Stopping Suicide among Farmers in India) is a free and open source. You have permission to republish this article under a Creative Commons license with attribution to the author and AnonHQ.com.