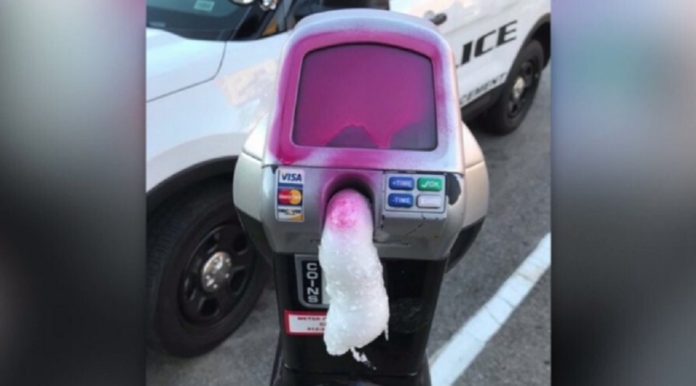 On the morning of October 24, a parking enforcement officer in Bloomington, Indiana noticed that all of the parking meters were spray-painted pink and green, and the coin and card slots were filled with expanding foam, making the machines inoperable.

A total of 125 parking meters were destroyed in the middle of the night, and police still don’t know who is responsible. They estimate that it will cost roughly $5,000 to repair the damage.

Unfortunately, it seems that the work of the vigilante vandals was all in vain. Parking enforcement officials have instructed Bloomington residents to instead use a smartphone app to pay for parking.

However, officers did say that they will not ticket people who park at meters and don’t use the parking app, so it will be up to the drivers to decide whether or not they want to pay. Perhaps the vandals did give everyone a momentary reprieve.

Video below shows the parking meters being repaired:

Parking Enforcement Officers continued Thursday to repair parking meters that were intentionally damaged. Parts for the meters were ordered Wednesday, and shipped overnight after at least 125 damaged meters were discovered damaged Wednesday morning. The damaged meters were on the square, along 6th Street, and Madison, as well as other areas downtown. The meters were covered with pink and green paint, and expanding foam had been sprayed into the coin slots. Bloomington Police Capt. Ryan Pedigo said he didn’t have an update on the investigation, but he anticipated the meters would be repaired quickly. (Video by Jeremy Hogan/The Bloomingtonian)

Posted by The Bloomingtonian on Thursday, 24 October 2019

This kind of activity is actually extremely common and some jurisdictions have considered putting cameras on the meters to catch vandals in the act.

In 2016, a cancer patient from Winnipeg, Canada actually recorded himself using expandable foam to break a parking meter that was outside of the hospital where he was being treated. The patient, Collin Kennedy, said that the fees kept on increasing and became too much for him. He called the parking meters a “tax on the sick.”

Instead of breaking the meters, activists in Keene, New Hampshire have adopted a charitable strategy in the battle against parking fees. For years, groups of Keene residents known as “Robin Hooders” have walked the streets filling expired parking meters with their own money, ultimately saving people from receiving parking tickets.

Occasionally, when they encounter an angry parking enforcer, members of the group are prepared to film the situation with their smart phones.

When the “Robin Hooders” come across a car that already has a ticket on it, they place information on the person’s windshield that provides tips on how to beat the ticket in court. While it would appear that this strategy is completely harmless and not breaking any laws, the city attempted to sue the group and prevent them from coming in contact with parking enforcers. Both lawsuits were thrown out.