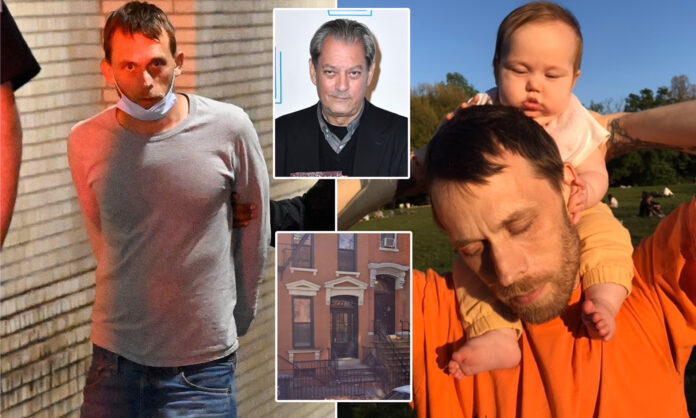 Daniel Auster, 44, told authorities that he woke up in his young family’s Park Slope apartment on the afternoon of Nov. 1 to find his 10-month-old daughter Ruby’s “lips blue and eyes stiff” — and then futilely tried to save her with Narcan, said Assistant District Attorney Tien Tran at Daniel’s arraignment in Brooklyn Criminal Court.

The troubled dad, who had been using heroin that day, told cops he gave Ruby the Narcan “in case I f–ked up,” the ADA said.

Paramedics were called and found the baby unconscious and unresponsive, and she was pronounced dead at nearby Methodist Hospital, the NYPD said.

City medical examiners found that Ruby died of an overdose of fentanyl and heroin — with enough drugs in her body to “render an adult unconscious,” Tran said.

Police have yet to determine how Ruby ingested the fatal drugs.

Her dad — who was arrested Friday night and charged with second-degree manslaughter, criminally negligent homicide and endangering the welfare of a child in her death — copped to having “glassine packets of heroin” that he kept in the bathroom, Tran said.

Daniel has since admitted to authorities that he took heroin the day Ruby died, despite initially claiming he hadn’t used drugs in two days, Tran said.

Ruby was alert and awake when her mom, Zuzan Smith, went to work and left her with Daniel on Nov. 1, according to Tran. Smith called the home around 1 p.m. and could hear the baby in the background. Daniel phoned 911 less than four hours later, at 4:26 p.m., the prosecutor said.

The autopsy, which ruled Ruby’s death a homicide, revealed no signs of bruising or trauma on the baby.

Tran asked Judge John Hecht to remand Daniel at the arraignment. Daniel’s lawyer, John Godfrey of the Legal Aid Society, asked for “reasonable bail” to be set and told the judge his client has gotten clean.

“He works in landscape construction. He attends Narcotics Anonymous,” Godfrey said. “He maintains a friendly relationship with the child’s mother.

“He did turn himself in,” the lawyer noted.

“There is extreme recklessness, he is a flight risk due to his drug use,” Hecht said.

Daniel did not speak at the proceeding. None of his family appeared to be in court.

Two of Daniel’s neighbors told The Post on Saturday that after his daughter died, they walked by the apartment building where he lived and saw infant items outside for anyone to take.

“Everything — all the baby clothes, books, toys — it was just heartbreaking,” said one of the residents who didn’t want her name used.

Daniel’s father and mother divorced in 1978.

That same year, Paul married Hustvedt, whose books include “The Blindfold,” “The Enchantment of Lily Dahl” and her best-known work, 2003’s “What I Loved.”

The elder Auster and Hustvedt have both written fiction that seems to be inspired by Daniel’s troubles, the Guardian reported in 2006. Hustvedt’s “What I Loved” features a relationship between an artist, his drug-addict son and the son’s stepmother.

Auster also reportedly wrote a character based on Daniel into his 2004 novel, “Oracle Night,” in which the narrator has a drug-addicted son who terrorizes his stepmom, the Guardian said.

Daniel’s father and a sister, both of whom live in Brooklyn, declined comment when reached by The Post on Saturday.