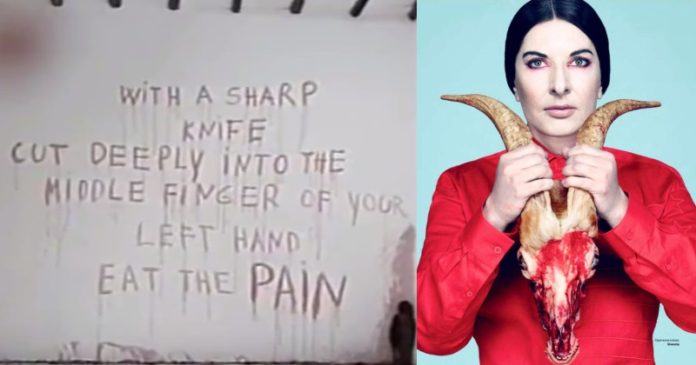 Wikileaks has given the public plenty to review in the past month. Having released the emails of Hillary Clinton’s campaign chair, John Podesta, practically everyday, many astounding revelations about the inner working of Hillary’s inner circle as well as the US political system in general have come to light. However, there have been some truly unusual emails in the mix, including those pointing to the influence of aliens on the federal government and Podesta’s own passionate stance on the disclosure of alien life. Yet, the most disturbing emails coming Podesta were published only this week and they imply that something truly dark and sinister is at work within Clinton’s inner circle and, perhaps, the US political elite in general. In an email sent to Podesta in 2015, Podesta’s brother Tony passes along an invitation to a “Spirit Cooking” dinner hosted by Marina Abramovic, a peformance artist known for use of ritualized gore. Marina’s email clearly shows a friendly relationship with the Podesta brothers, signing off saying “with all my love, Marina.”

So, what is “spirit cooking” and why does it matter? Before going any further, watch the below video showing Abramovic prepare for one of her spirit cooking dinners in 1997. She uses congealed pig’s blood to paint cryptic, coded messages on the walls of an empty house and covers effigies of small children in the blood as well.

Why would someone attend an event like this? This is where things get interesting. “Spirit Cooking” is a term first invented by English writer and ceremonial magician Aleister Crowley. Crowley created spirit cooking as a “sacrament in the religion of Thelema.” Thelema is a religion founded by Crowley that involves the worship of ancient Egyptian deities. Crowley founded it after he was allegedly contacted by a “praeterhuman” or non-corporeal being calling itself Aiwass who dictated to Crowley a text outlining the basis of the Thelema religion.

This “religion” is extremely popular with the global elite as well as well-connected celebrities and is easily recognized by the use of the phrase that embodies the philsophical law of Thelema: “do what thou wilt.” Within this context, spirit cooking is an occult performance during which menstrual blood, breast milk, urine, and sperm are used to create a “painting.” In the video, the words written by Abramovic offers the “recipe” for the painting, which is said ritually symbolize the union of man with the microcosm, and macrocosm. It is also used during sex cult rituals and is used as an aphrodisiac recipe by the elite. One of these “recipes” calls for the practitioner to do the following: “with a sharp knife cut deeply into the middle finger of your left hand. Eat the pain.” Is it a coincidence that Podesta emailed his doctor a few days later worried about an infected finger?

In light of the unusual nature of this event, some may argue that the “spirit cooking” dinner was just another one of Abramovic’s provocative performances. However, Abramovic is on record saying that these rituals are only art if performed in public. If they are performed in private, they represent something else entirely – a deep, intimate spiritual communion. Podesta and his brother, and likely many more in the elite circles of US politics, are part of this occult religion whose rituals glorify gore, death, sacrifice, and sex.