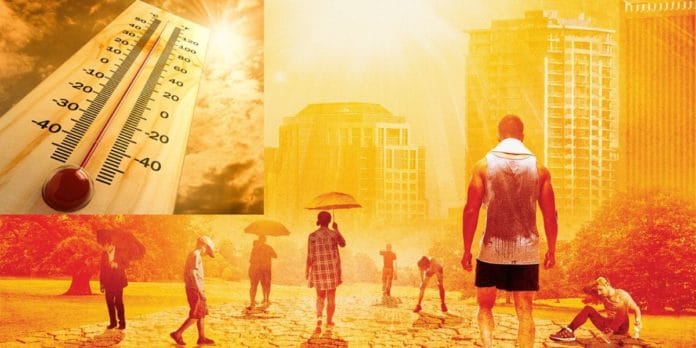 It appears that a sizzling “heat dome” will be frying most of the continental United States for several weeks starting this weekend.

It was only to be expected that in an already brutal year, the summer of 2020 was going to be the absolute worst.

And now, it appears that a sizzling “heat dome” will be frying most of the continental United States for several weeks starting this weekend.

What this means is that over 80 percent of the U.S. population – encompassing 265 people – can expect sweltering heat over the next week with highs exceeding 90. Another 45 million people will be facing highs in the triple digits.

Additionally, we can expect a full season of lethal heat ranging from 90°F to 121°F, not to mention extreme tropical storms, wildfires, and extreme weather related to La Niña conditions, reports the Independent.

On Friday, the National Weather Service issued excessive heat watch alerts for “dangerously hot conditions” and forecast that between Friday and Tuesday, over 75 record high temperatures would be reached or exceeded, with heat expected to increase in the following week.

Summer is in full swing! Tropical Storm Fay formed in the Atlantic. Thunderstorms, some severe, in the Plains and Upper Midwest. Excessive heat up to 121 F possible in the Desert Southwest into early next week. Critical fire weather threats continue for portions of the West. pic.twitter.com/iUODiRglYd

On Saturday, temperature in Las Vegas reached a sweltering 112°F with the temperature expected to increase to 114°F on Sunday, while in Phoenix temperatures hit 115°F with Sunday expected to bring a withering 116°F before coasting at or above 110°F through the next week.

The new extremes sharply raise the danger of heat-related illness and death, further adding to the woes of hospitals struggling with surging COVID-19 infections in hard-hit regions and states like Arizona, California, Nevada and Texas.

“The heat wave will be very long-lived, lasting multiple weeks in some areas with only a few days of near-normal temperatures during that span,” Jeff Masters, Ph.D. and founder of the popular site Weather Underground, told CBS News. “This will increase the odds of heat illness and heat-related deaths.”

Indeed, that’s the highest I see—although their record only goes back to 1949. https://t.co/CIRg2Px5V1

And for those who may be feeling a little bored sheltering at home, there could be some excitement in store for you in the form of thunderstorms in the Midwest and Northeast, hurricanes in the South, and wildfires in the Southwest and West Coast.

This less-than-good news comes as the east coast buckles down and braces itself for Tropical Storm Fay, which is set to thrash the New England region, deluge New York, and inundate parts of New Jersey with flash floods.

The news comes as many are already struggling to stay cool during the COVID-19 lockdown without air conditioning, or even the jobs and income to keep their AC units operational if they do have them.

Heat domes occur when the atmosphere keeps hot ocean air trapped as if it were under a lid or cap, with the end result being conditions of persistent high pressure and sustained heat for a prolonged period of time, sprawled over massive geographical regions.

To make matters worse, the larger the heat dome becomes, the hotter and more longer-lasting it will be.

According to a team of National Ocean Services researchers who set up the Modeling, Analysis Predictions and Projections program to figure out why heat domes occur, they found that the primary cause was strong changes in ocean temperatures from west to east in the tropical Pacific Ocean during the prior winter.

“This happens when strong, high-pressure atmospheric conditions combine with influences from La Niña, creating vast areas of sweltering heat that get trapped under the high-pressure ‘dome’,” the ocean service said.

Warnings of the brutal heat dome come one day after the NWS issued a La Niña watch Thursday predicting a 50 to 55 percent chance that the phenomenon would develop in the coming months, ensuring an intensification of the Atlantic hurricane season and a growing number of hurricanes and tropical storms.