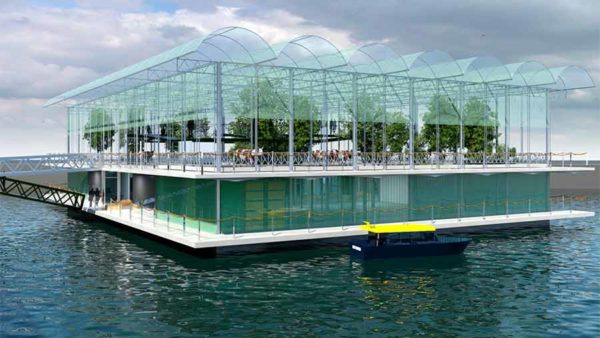 As the human population continues to increase, it encourages competition for new space of land. Unfortunately, the land is fixed. It cannot be expanded. Global warming, which is believed to contribute to the rapid global sea level rise, ensures that land is lost to the sea.

One of the basic human needs for survival, is food. However, without land, most food consumed cannot be produced. When the sea eventually takes over some of the already limited land, disaster would follow. The human population would face extinction. This means an alternative to sustain the human population in the future is a must. This is encouraging researchers to pursue the possibility to grow food without necessarily relying on the land. For a start, the Netherlands has announced their launching of the world’s first ever floating farm that will  produce dairy products for its population. The farm will floating at the port city of Rotterdam, supplying milk to local consumers.

The concept aims to address the problem of how to feed a growing population when competition for land is steadily growing. It also seeks to reduce the distance transported between milk and other dairy products to urban consumers, reducing greenhouse gas emissions and putting shoppers back in touch with nature and farmers. According to Farming UK News, the floating farm concept was developed by three entities. They include: The innovation institute of the Dutch agriculture and dairy sector, Courage; the national frontrunner on city farming, Uit Je Eigen Stad; and a leading Dutch company on floating concepts, Beladon.

According to the entities involved in the project, they will first build a pilot farm of bout 40 cows on a fully floating structure. The cows will have access to a “cow garden” at the top of the structure, with a soft floor that has the feel of a natural living environment. There will be trees and bushes to offer areas of shade, and the roof of the cow garden can be entirely opened.

Additional grass, grown under LED lighting, will also be offered to the cows, giving the animals access to fresh fodder all year round. Using a bridge between the farm and the dock, cows will also have access to an adjacent pasture when tides permit. The farm will measure about 40 x 32 m (131 x 105 ft). The 40 cows are expected to produce about 1,500 kg (3,300 lb) of milk every day. The raw milk will be sold to the public via a “milk tap,”, with vending machines for processed products. The farm will also sell milk to local shops, hotels and catering outlets. The cows will be milked with a robotic milker. Any bull calves or cows coming to the end of their productive life will be removed from the farm and sent to a local park, probably to be killed for meat.

Urine produced by the cows will drain through the floor and into an air-tight storage facility. This will be used to produce fertilizer for farmers in the city.

A representative of the project, Minke van Wingerden revealed that the construction of the farm would take about eight months. However, it is yet to start. Directors of the project said in a statement: “As the Dutch have already lived with and on the water for hundreds of years, farming on water is no longer science fiction, but a logical step forward.”

The directors also claimed that the floating farm concept is possible on a global level. They said plans are far advanced to float a similar farm in New York, which could be used to raise poultry, milk dairy goats, and for horticultural cropping.

This article (Netherlands Sustainable Future: A Floating Farm to Produce Dairy Products by 2017) is a free and open source. You have permission to republish this article under a Creative Commons license with attribution to the author and AnonHQ.com.

Christian Activist Wants to Sue NFL Because J.Lo and Shakira Put Him in “Danger of Hellfire”