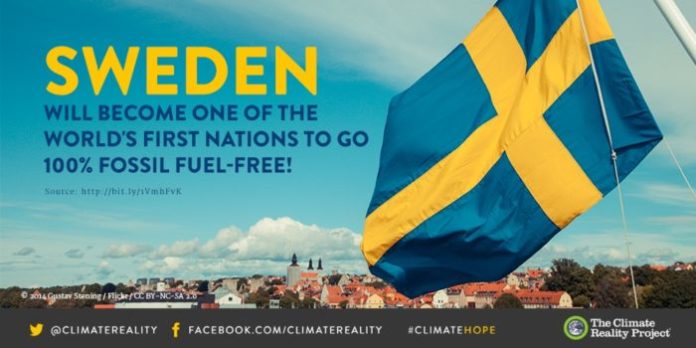 The Swedish government has announced that the country will be entirely powered by renewable energy by 2040, putting an end to its dependency on expensive fossil and nuclear energy sources in the Nordic country.

In 2015, it is said 57% of Sweden’s power came from renewables such as hydropower and wind sources. The remainder came from nuclear power.

The country is hoping to shut 4 out of 10 nuclear reactors by the year’s end, allowing for the full implementation of wind energy policy in the country. Despite the sporadic nature of wind power, the country said it could be managed by teaming it with a combination of hydropower as well as interconnecting with other nations. This will be a milestone achievement for the country over the next 25 years. Anne Vadasz Nilsson, the Director General of the Swedish Energy Markets Inspectorate, told reporters that her country holds huge potential to explore wind energy, and that they will not leave it to be wasted.

“We are not densely populated, we have a lot of good places to put land-based large-scale wind and there is large potential for that in Sweden,” she said.

Even before this announcement, at the 2015 United Nations General Assembly meeting, the country’s Prime Minister, Stefan Löfven promised that his country is stepping up efforts to boost onshore wind power generation, hoping to become fossil-free by 2040. Since last year’s promise, Sweden has steadily increased its wind power output.

The renewable source has proven very cost effective, raising hopes among the country’s leaders that producing energy in this way is a step in the right direction.

“Nuclear is quite an expensive energy source due to safety regulations and funding for long-term nuclear waste management, among other things. Renewables, meaning large-scale wind in Sweden, on the other hand, are cheaper and cheaper to commission and to run. This together with low wholesale prices will make it less likely that new nuclear power plants will replace the remaining ones when they are phased out due to old age,” Ms Vadasz Nilsson said. In 1970, Sweden was heavily dependent on fossil fuels. It accounted for about three quarters of the country’s energy needs. After the oil crisis in the early 1970s, Sweden then heavily invested in researching alternatives. The country went a step further in 2003, promoting renewable energy use, introducing the famous Green Electricity Certification (GEC). Under the GEC, power generators receive certification for producing electricity from renewable energy sources such as wind, solar, geothermal, wave power, biofuels, or small-scale hydroelectric plants. This resulted in the nation’s success in the energy sector.

According to the Independent, Nordic countries in Northern Europe already lead the world in renewable energy production. In 2015, Denmark produced a whopping 140% of its energy through wind power alone. The country then exported the surplus to its neighbors.  In Iceland, too, the country is said to run 100% on renewable sources. The country has invested much in hydro and geothermal energy sources.

In the latest bi-annual EY Renewable, an index was recently released, scoring the energy appeal. European countries saw their positions improve, with France, Belgium, Sweden, Germany, Ireland, Norway and Finland all climbing up the ladder.

In Central Europe, Germany produced much of its energy needs from renewable sources in 2015; the country then sold the excess to its neighboring countries at affordable prices. Taking a cue from the 2011 Fukushima nuclear disaster in Japan, Germany has shut down nine of its nuclear reactors. Combined, these nuclear reactors had the capacity of generating enough power for at least 20 million homes in Europe.

Available statistics show that Germany’s reliance on nuclear power has significantly fallen, with the country currently generating just 16% of its electricity from nuclear power. Instead, renewable sources are now the preferred source of electricity production in the country, ultimately resulting in excess energy. Remarkably, the country has increased its renewable energy production by almost five times over the last decade.

This article (Sweden Will Run Entirely on Cheap Renewable Energy by 2040 ) is a free and open source. You have permission to republish this article under a Creative Commons license with attribution to the author and AnonHQ.com.