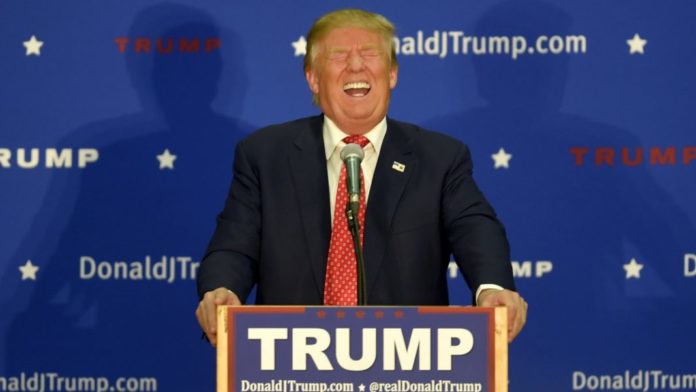 Donald Trump is in the process of choosing his new cabinet members, and has made former head of Breitbart News, Stephen Bannon, his Chief Strategist. Bannon is leader of the insurgent far right-wing, “Alt Right Movement,” which has been criticized widely for being a haven for white nationalists. According to the Southern Poverty Law Center, quote, “The Alternative Right, commonly known as the Alt-Right, is a set of far-right ideologies, groups and individuals whose core belief is that ‘white identity’ is under attack by multicultural forces using ‘political correctness’ and ‘social justice’ to undermine white people and ‘their’ civilization. Characterized by heavy use of social media and online memes, Alt-Righters eschew ‘establishment’ conservatism, skew young, and embrace white ethno-nationalism as a fundamental value,” unquote.

Under Bannon, Breitbart has sparked controversy with reports such as; “Birth Control Makes Women Unattractive and Crazy”; “Trannies Whine about Hilarious Bruce Jenner Billboard”; “Bill Kristol: Republican Spoiler, Renegade Jew,” and; “Hoist it High and Proud: The Confederate Flag Proclaims a Glorious Heritage.” Bannon was charged in 1996 with Domestic Abuse, Battery, and Dissuading a Witness. In an argument with his then wife, police reports state Bannon pulled at her neck and wrist, though he was never questioned by police, and eventually pleaded not guilty. The charges were dropped, and a year later, the couple divorced.

The day after it was announced Steve Bannon would have a position in the White House, Bernie Sanders, who after this election is reported to have become one of the most powerful Democrats in Washington, has stated he’s willing to try working with Trump, but has made it clear he will not tolerate racism, sexism, and homophobia. He and other Democrats have called for Trump to get rid of Bannon, who he has called a, quote, “racist individual.”

Also being considered for top posts in Trump’s cabinet are Newt Gingrich, who was the first Speaker to be disciplined for an ethics violation, and Rudy Giuliani, who has been accused of having white supremacist ideas that were portrayed through his actions as mayor of New York, when he ordered police officers to engage in racial profiling. On Friday, it was announced Trump has selected Senator Jeff Sessions as attorney general of the United States. Sessions is a conservative from Alabama who was rejected to be a federal judge in the 1980s by the Republican-controlled Senate Judiciary Committee, due to racially charged comments Sessions made. In one statement made by the Senator, he said he thought the Ku Klux Klan was okay until he, quote, “found out they smoked pot,” unquote.

Trump’s transition is reported to be in a state of disarray, however, as there has been internal strife among those in his cabinet, marked by a series of firings that were orchestrated by Trump’s son-in-law, Jared Kushner. Among those fired was Gov. Chris Christie of New Jersey, who as a federal prosecutor, had sent Kushner’s father to jail.

In an episode of FOX Opinion Network’s “The Kelly File,” prominent Trump supporter, and former spokesman for Great America PAC, Carl Higbie, cited World War II-era Japanese-American internment camps as a, quote, “precedent,” for an immigrant registry in the Trump administration. According to the New York Times, Higbie was referring to a statement made by Trump transition team member, Kris Kobach, in which he suggested that the new administration could reinstate national registry for immigrants that come from countries with terrorist activity.

Mayors throughout various sanctuary cities, including Seattle, Chicago, and New York, have announced they will not follow federal orders to deport immigrants, despite Trump’s threats to withdraw federal funding to the cities if they don’t comply. Seattle mayor, Ed Murray, stated, quote, “Seattle has always been a welcoming city. The last thing I want is for us to start turning on our neighbors,” unquote. LAPD Chief, Charlie Beck, has also refused to assist Trump in his efforts to carry out his mass-deportation plan. Beck states, quote, “If the federal government takes a more aggressive role on deportation, then they’ll have to do that on their own,” unquote.

In news on the DAPL; The Morton County Sheriff’s department is investigating an incident in which a Native woman was hit by a presumed DAPL worker in a white truck wielding a gun, and then dragged by the truck when she was caught on the truck’s side-view mirror. Protesters had briefly blocked work yard entrances, forcing workers to leave, though they were trying to deescalate the situation. An ambulance was called after the woman sustained injuries, however she refused treatment. Protesters on Facebook stated her hand had been smashed, and her feet were run over. Another video shows the man striking the woman as she was stuck on the truck’s side-view mirror.

Protests supporting the fight against the DAPL have been organized throughout various cities in the U.S. after the Army Corps of Engineers delayed construction on the pipeline, spurring the Energy Transfer Partners to file a lawsuit. Energy Transfer is hoping a judge will let them circumnavigate the Corps’ decision, so they can finish the pipeline anyway. In an interview with CBS, the company’s CEO, Kelcy Warren, stated he is 100-percent confident the project will be completed under Donald Trump’s presidency. Standing Rock Sioux Tribal Chair, Dave Archambault II, called the move an act of desperation, since Dakota Access knows their time is running short. Bernie Sanders addressed a huge crowd outside the White House on Tuesday evening, demanding, quote, “Sovereign rights of the Native American people be honored and respected,” unquote.

According to the Connecticut-based newspaper, the Hartford Courant, two men were arrested after reportedly punching and kicking a man who held a Donald Trump election sign. Anthony Hobdy, 36, was charged with third-degree assault, and possession of narcotics. His accomplice, 32-year-old Wilson Eschevarria, was charged with third-degree assault as well, and is scheduled to appear in court November 23rd.

In Florida, an elderly gay man was attacked after a Trump-supporter followed him to his home. 75-year-old Chuck Redding of Sarasota said he noticed a dark-colored SUV following his vehicle closely after he dropped off a friend on Monday. Upon further reflection, Redding now believes he was targeted because of a rainbow flag and Human Rights Campaign bumper sticker on the back of his car. He states he became alarmed once the SUV followed him onto the street he lives, prompting him to park in front of a neighbor’s house, rather than going directly home. As soon as his vehicle stopped, the assailant, who has been described as a bearded Hispanic man between 20 to 30-years-old, got out of his SUV and approached Redding’s car while yelling at him. According to Redding and a neighbor who witnessed the incident, the assailant then pulled him from his car, and began to assault him. The attacker returned to his SUV and sped away after the neighbor ran to the elderly man’s aid. Redding was then rushed to the hospital where he was treated for an injured hand, knee, and torn toe. He says he remembers his attacker saying, quote, “You know my new president says we can kill all you faggots now,” unquote.

Upon request, we’ve been asked to mention The Venus Project here, which we are happy to do. For those who are unfamiliar, The Venus Project is an organization created by Jacque Fresco, that proposes a plan of action for global social change, and would call for a, quote, “Straightforward approach to the redesign of a culture, in which the age-old inadequacies of war, poverty, hunger, debt, environmental degradation and unnecessary human suffering, are viewed not only as avoidable, but totally unacceptable,” unquote.

Referred to as a “resource-based economy,” Fresco’s idea advocates for a society that runs on socio-cooperation, using science and the advancement of technology in clean and efficient ways. Monetary systems, mass-consumerism, and corrupt-governments would be a thing of the past. In Fresco’s vision, there is no need for a governing body or military when mankind is provided with everything they need, from the necessities required to survive, to the things that give us pleasure, all of which we could provide in abundance at our current technological level. It is Fresco’s belief that hatred is something that is taught, and that deep down, humans are good by nature. In this system, greed and corruption would evaporate, and prison systems would be replaced with advanced medical centers when we focus our innovations in technology, not on weapon creation, but in areas of importance, such as the medical field.

For more information on The Venus Project, please visit www.thevenusproject.com.

Finally, in Anonymous news this week, war has been declared on the corporate-paid mainstream media. It has been known for quite some time that the mainstream media cannot be trusted, and as citizens become more aware and accepting of this fact, the tactics used for deceit and propaganda have only intensified. This U.S. election sparked a surge in bias reporting, fear-mongering, and blatant lies. From the non-existent coverage by the mainstream media of Standing Rock, to the construction of election data and phony polls, nearly all news outlets displayed a complete lack of regard for the truth. This bled through to alternative news outlets, who by the end of the election, spent just as much time fact checking as they did reporting. All of this was condoned, often instigated, and taken advantage of by both Clinton and Trump, who were each caught in lies of their own on a near weekly basis, and now that the election is over, the mainstream media is still working to confuse and turn citizens against one another. The war that is currently being declared on corporate-paid media is long overdue, and we wish our Anonymous brothers and sisters the best of luck.

This article (Teh Weekly News, Ep. 8 – Trump’s Chumps, and Automobiles) is a free and open source. You have permission to republish this article under a Creative Commons license with attribution to the author and AnonHQ.com.

(2016). CEO: Dakota Access Pipeline will be completed under Trump presidency. CBS This Morning. Retrieved from: https://www.youtube.com/watch?v=gt0h_yjX5CA

EV (2015). The Venus Project: One World, No Government. Could It Work? AnonHQ. Retrieved from: http://anonhq.com/venus-project-one-world-no-government-work/

Fulton, Deirdre (2016). #NoDAPL Protests Loudly Declare: ‘We Are Not Going Silently Into the Night’. Common Dreams. Retrieved from: http://www.commondreams.org/news/2016/11/16/nodapl-protests-loudly-declare-we-are-not-going-silently-night

Griffiths, Brent (2016). Bernie Sanders to Bannon: Americans won’t turn on each other. Politico. Retrieved from: http://www.politico.com/story/2016/11/bernie-sanders-steve-bannon-231337

Staff (2016). IVAW Tells the Army Corps of Engineers: Stand Down at Standing Rock. Iraq Veterans Against the War. Retrieved from: https://www.ivaw.org/blog/ivaw-tells-army-corps-engineers-stand-down-standing-rock