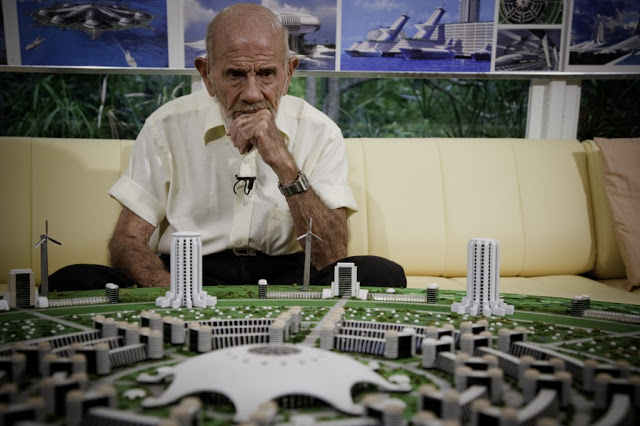 Architectural designer and futurist, Jacque Fresco, is considered an inspiration by many for his innovative ideas and his blueprint for a sustainable society and planet. It is known as the Venus Project. While some of his ideas are considered radical and far-fetched, we are now reaching a point in technology where it may be time for a reappraisal.

The Venus Project proposes an alternative vision of what the future can be if we apply what we already know in order to achieve a sustainable new world civilization. It calls for a straightforward redesign of our culture in which the age-old inadequacies of war, poverty, hunger, debt and unnecessary human suffering are viewed not only as avoidable, but as totally unacceptable. Anything less will result in a continuation of the same catalogue of problems inherent in today’s world. Today many people believe what is needed is a higher sense of ethical standards and the enactment of international laws to assure a sustainable global society. Fresco’s idea advocates for a society that runs on socio-cooperation, and uses science and the advancement of technology in clean and efficient ways. He calls this system a “resource-based economy”, and it would involve reconstructing the entire planet’s infrastructure. The planet would need to work together as one, “eliminating the false borders that separate continents and countries and looking at our planet as an open trading highway system.”

Because our current system is based on mass consumerism, which promotes environmental neglect, we are not living in a sustainable society, and it’s only a matter of time before we drain the planet of its resources. Fresco suggests that the answer is to automate as much as possible in the shortest period of time. By doing so, we can use technology to produce and distribute resources for the entire world in a clean and efficient manner. In this way, technology can work for everyone. Two common concerns at this point are whether or not there would be enough resources for everyone, and whether or not mass automation will have a negative effect on the job market. The first thing to take into consideration is that the Venus Project would terminate the need for a monetary system, thereby having no effect on the job market, and if we can get to a point where the level of production is high enough (which Fresco claims is more than possible), scarcity will no longer exist. The theory is that with most jobs automated, and resources in abundance, the average person will only have to work a couple hours a day, and they would have everything they could possibly need.

Fresco also suggests that computers can be used to benefit mankind  by using a global intelligence network to oversee things such as the production and distribution of goods, and to ensure there would be no shortages or overruns of resources. “Decisions being made in this innovative society would be based around the needs of the people and the conservation of the planet, not corporate interests.” Our corporate-run society uses the monetary system to stress a need for vast resources that don’t have to be used—it promotes waste. Fresco has numerous ideas for this new system, all of which are outlined in the documentary provided at the bottom of this page. From clean, renewable energy, to transportation, it seems Fresco has thought of nearly everything. Fresco’s system would also eliminate the need for a government. As of yet, “none of the world’s economic systems—socialism, communism, fascism, or the free enterprise system—have eliminated the problems of elitism, nationalism, racism, and most of all scarcity.” These government-run systems are centered primarily on economic disparity.

When money is used to regulate and distribute resources for profit, people and nations are out for themselves. They will seek advantage at any cost. They do this by maintaining a competitive edge, or through military intervention. War represents the supreme failure of nations to resolve their differences. From a strictly pragmatic standpoint, it is the most inefficient waste of lives and resources ever conceived.

Fresco believes that people are good at heart, and that negative ideals are taught. It is his belief that when people are provided with everything they need, from the necessities required to survive, to the things that give us pleasure, the need for greed and corruption evaporates. There is no need for a governing body or military in a world where everyone is provided for. There is no need for police if greed and desperation, and ultimately crime, are not present.

In the world Fresco is suggesting, technology can be used to advance mankind in positive ways. Rather than using science to advance our weapons technology, we can concentrate on the true necessities, such as the medical field. Fresco believes that with medical care available to all, as well as advancements in technology, those conditions and disorders that cause violent reactions in people can be detected and treated from an early age, without the need for a prison system.

This has nothing to do with those who want to form an elite world order with themselves and large corporations in control and the rest of the world subservient to them. On the contrary, a global resource-based economy enables all people to reach their highest potential where they can thrive and grow in a society that works on their behalf. A society that protects and preserves the environment as well—one that understands we are a part of nature, not separate from it.

There have been a few arguments against the Venus Project, with some even claiming that Scientology, Hitler, Mao, and Stalin all pale in comparison. This mainly seems to be due to the fact that there would be no need for currency, police, prison systems, or a government in Fresco’s vision.

Some have commented that a system such as the one Fresco is suggesting would eliminate competition, and without competition humans would lose their creativity and imagination. It should be noted that the desire for competition is not a human trait, but rather a cultural trait, and there was no direct link found between competition and the ability to create or imagine:

Mainstream culture in the United States emphasizes assertiveness and individuality, so many Westerners are competitive and reluctant to give in to others. In more communal societies, people have less individualistic perspectives and are less likely to focus on winning conflicts (Ting-Toomey, 1991; Van Yperen & Buunk, 1991). Similarly, in Japan and many other Asian cultures, open disagreement is strongly condemned (Gangwish, 1999). Great effort is made to avoid winning at the cost of causing another person to lose face. In Japanese sports, the ideal is not for one team to win but for a tie to occur so that neither team loses face. When there is to be a winner, Japanese athletes try to win by only a slim margin so that the losing team is not humiliated (“American Games, Japanese Rules,” cited in Ferrante, 2006). (Wood, 2013). “The state will ‘wither away’. In the socialist commonwealth of the future there will be neither judges and policemen nor prisons and gallows.”

The critic also states this does not conclusively prove that the Venus Project is socialist.

Communism being similar to a resource-based economy or the Venus Project is an erroneous concept. Communism has money, banks, armies, police, prisons, charismatic personalities, social stratification, and is managed by appointed leaders. The Venus Project’s aim is to surpass the need for the use of money. Police, prisons and the military would no longer be necessary when goods, services, healthcare, and education are available to all people.

In a report from Collective-Evolution:

Some argue that Jacque Fresco’s plans are idealistic and crazy, and that our world is too far away from such a utopia. However, if we take a moment to observe our current state, it is easy to see that people are not content with the way the world is currently run. Countries all around the world are standing up to their governments with hope of reconstructing a future which provides equal and harmonious living standards for all. We are aware that we need to create something new, and perhaps Jacque Fresco’s blueprints hold the key to the new Earth we’ve been waiting for all along.