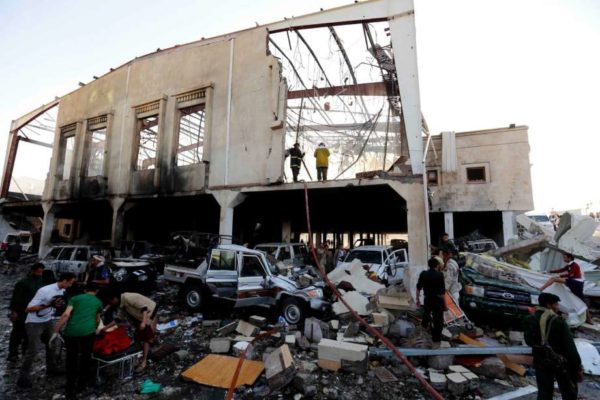 The war in Yemen is often referred to as the forgotten war, due to the lack of attention received by the media.

Mainly, the war is a proxy between the Kingdom of Saudi Arabia and the Islamic Republic of Iran. In 2014, rebel groups from the Houthi movement allied with troops loyal to the former president of the country, Ali Abdullah Saleh captured the majority of the country, including the capital Sana’a. The Houthis belong to the Shia faction of Islam, and therefore have support from Iran – a major Shia country in the Middle East. The current president, who the Houthis want to oust, Abd Rabbuh Mansur Hadi is a Sunni. He has the backing of Saudi Arabia – a major Sunni country in the region.

In March 2015, Saudi Arabia convinced other Sunni countries in the region to form a coalition aimed at dropping bombs against the Houthis. The airstrikes exacerbated the already fragile situation. The Houthis, too, have received arms supply and fighters from Iran. The United States is on the side of the Saudis, and has provided technical assistance to the coalition, to bomb the Houthis.

I’ll work w/ a bipartisan coalition to block $1.15 billion in arms to Saudi Arabia. We shouldn’t promote an arms race in the Middle East.

The Saudi-led bombing against the Houthis is still in progress, and all diplomatic efforts to end the war have failed. The Houthis control the majority of Sana’s, and have formed a unity government, which the United Nations does not recognize. On Oct. 8, 2016, the Saudi-led coalition targeted a funeral hall packed with mourners in Sana’a. Bombs were dropped on the facility, reportedly killing more than 140 people.

The Houthi government undersecretary for Health, Nasser al-Argaly, told reporters that the funeral hall was turned into a “lake of blood” after the bombs was dropped by the Saudis. He also revealed the strike left more than 534 people wounded. According to him, the death toll is likely to rise, as many of the injured are in critical conditions.

Medical officials also confirmed that those killed and wounded included members of the Houthi rebels. Some top officials of the Houthi unity government were also reportedly killed. It is said the head of Sana’s’ local council, Major-Gen. Abdul-Qader Hilal, was also killed. The Houthi interior minister, Galal al-Rawishan, was also badly wounded. He is said to also be in critical condition, meaning there is no end to the war. Rescue workers said they collected many body parts in sacks, unable to identify the victims. The strike reportedly left the building little more than a shell, with most of its walls and roof gone. Cars parked outside were completely destroyed by the blast.

The Health Ministry immediately summoned off-duty doctors and called on residents to donate blood, in a radio broadcast. Access to the hall was made difficult, due to a fire that erupted after the airstrike. Many bodies were burnt beyond recognition.

The spokesman for the Houthi government in Sana’a, Mohammed Abdul-Salam, described the airstrike as the latest act of “genocide” by the Saudi-led coalition. He angrily vowed that the Houthis will remain resolute to fight the Saudis. He said: “The silence of the United Nations and the international community is the munition of the murderers. Those murderers will not escape divine justice.” According to a recent report by the United Nations’ human rights chief, Zeid Ra’ad al-Hussein, 3,799 civilians have been killed since the Saudi-led air campaign began in Yemen. The United Nations also estimates that the conflict has claimed the lives of more than 9,000 people, as well as displacing nearly 3 million others. It is said 60% of all civilian deaths in the conflict is as a result of airstrikes by the Saudi-led coalition. In August 2016, after pressure from human rights groups, the United States government announced that it is redrawing its support for the Saudi-led coalition in the conflict. An official statement from the Pentagon said the decision by the government is a result of the rising number of civilian casualties by coalition airstrikes in the country.

However, since the announcement, the United States military is still in league with the Saudis in Yemen. In fact, the United States government recently approved a $1.15 billion arms deal with Saudi Arabia. Many of these weapons are mainly earmarked for use in Syria and Yemen, putting many more innocent civilians at risk of deaths, injuries and traumas, among other devastating effects.

This article (Terror: US-Backed Saudi Coalition in Yemen Kills over 140 Funeral Mourners ) is a free and open source. You have permission to republish this article under a Creative Commons license with attribution to the author and AnonHQ.com