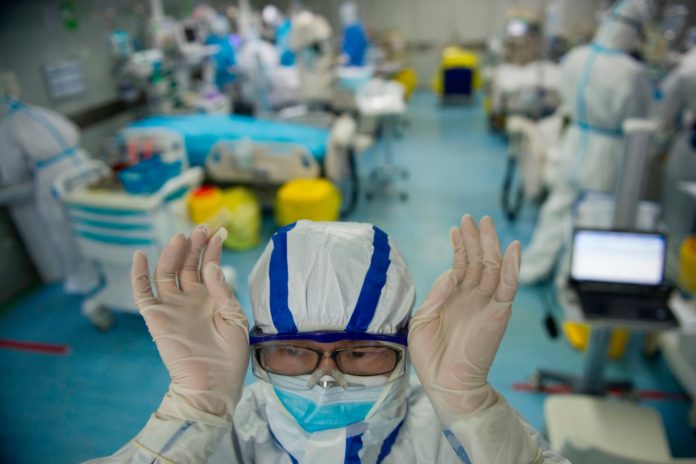 Health professionals are increasingly sounding the alarm over the U.S. healthcare system, warning that the coronavirus outbreak will quickly overwhelm unprepared hospitals without swift action to provide equipment to nurses and doctors.

“This is a nationwide problem, even on the private side,” an anonymous doctor told NBC News. “No clinic in this country, or hospital for that matter, is going to have enough equipment.”

NBC News reported that around 250 doctors and nurses responded to an informal survey request and painted a bleak picture of a healthcare system already on the verge of collapse with at least a month to go before coronavirus cases peak in the U.S.—citing in particular a lack of personal protective equipment (PPE).

According to NBC News:

Nearly all who responded said there were shortages of PPE in the hospitals, outpatient clinics and offices where they worked.

One Philadelphia doctor interviewed by NBC News said her husband—also a doctor—is on the frontlines in the city.

Calls for the federal government to step in and order manufacturers to produce equipment increased Friday, with the union National Nurses United issuing a demand for immediate action to protect healthcare workers.

“We need to act now and act fast,” Bonnie Castillo, National Nurses United executive director, said in a statement. “Priority number one is to protect the health and safety of our nurses and health care workers so that they can continue to take care of patients and keep our communities as healthy as possible through this pandemic. If our health facilities no longer stay as centers of healing and instead turn into disease vectors, many more people will needlessly suffer from this terrible disease.”

It’s not just PPE. Testing kits are near-impossible to obtain for hospitals and health professionals, leading to difficult decisions on who to treat, when to treat them, and how to track the virus. In Los Angeles County, health officials are instructing doctors and nurses “to test patients only if a positive result could change how they would be treated.”

As the Los Angeles Times reported:

A front-line healthcare provider who was not authorized to speak to the media and requested anonymity said county doctors are interpreting Thursday’s letter and other advice coming from senior L.A. County public health officials to mean they should only test patients who are going to be hospitalized or have something unique about the way they contracted the virus.

They are not planning to test patients who have the symptoms but are otherwise healthy enough to be sent home to self-quarantine — meaning they may never show up in official tallies of people who tested positive.

The coming crisis, as one nurse in Michigan told NBC News, is the result of a societal failure to prioritize public health.

“I don’t feel like my hospital is failing us,” said the nurse. “It’s the whole system that’s failing us.”