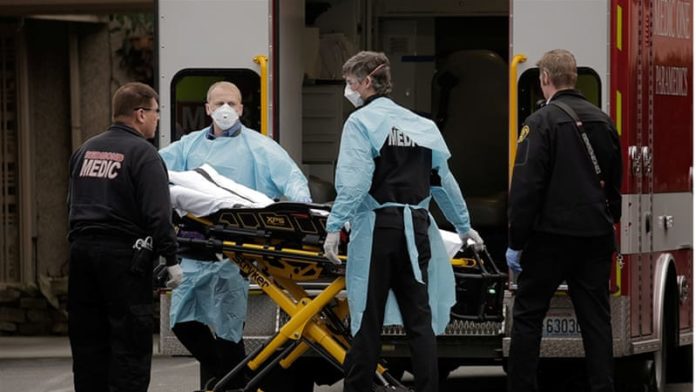 News of the novel coronavirus and the resulting potentially deadly disease spreading throughout the United States and across the world continues to develop rapidly. According to the map managed by Johns Hopkins, there are now over 101,000 confirmed cases of COVID-19 and nearly 3,500 deaths worldwide.

Because it can be difficult and overwhelming to keep up, we’ve sifted through hundreds of articles and pulled out what we feel are the most important developments of the last 24 hours so you don’t have to.

Here are five huge developments that you need to know about the global outbreak of COVID-19.

The U.S. is Botching COVID-19 Testing

The CDC is reportedly refusing to test a nurse with symptoms that volunteered to assist with CVOID-19 patients at a California hospital.

According to the letter posted two Twitter by Dr. Eric Feigl-Ding, the CDC claims that she cannot be tested because she was properly protected during her time volunteering.

Really upsetting 🧪- a nurse at CA hospital VOLUNTEERED to work w/ #COVID19, wore proper PPE, and developed symptoms. But then CDC said because she wore PPE — she could NOT be tested! (letter verified). Testing should be for all, especially HCW on front lines. #TESTVIRUSNOW pic.twitter.com/RG4gw0yCwI

Meanwhile, Dr. Feigl-Ding said that 22 million Californians are now eligible for free medically necessary COVID-19 testing. However, the example above indicates there still may be a discrepancy when it comes to deciding which situations warrant testing and which ones don’t.

A thread posted to Twitter on Thursday by a man claiming his uncle has tested positive for COVID-19 in California, says that his case is being mismanaged.

My uncle just tested positive for the coronavirus. He lives in Venice, CA.

I’ve not been in direct contact with him, so we are not at risk from him, but I want to relay how the health department has managed his case. #COVID

He was skiing in the Italian alps with 6 other guys. 4 of them, including my uncle, now have the coronavirus. One is in a coma. two are sick, and my uncle has not presented any symptoms as of yet. He self-quarantined and called the health department. #COVID

On Thursday, U.S. Vice President Mike Pence acknowledged that there are not enough COVID-19 tests currently available to meet the demand for them as the outbreak spreads. Pence, who is in charge of national coronavirus response, previously said that “every American can be tested.”

Pence said: “We don’t have enough tests today to meet what we anticipate will be the demand going forward.”

According to the Atlantic, only 1,895 Americans have been tested for the virus and so far roughly 10% tested positive.

Amid the shortage of tests, six U.S. states are not currently testing for COVID-19, the disease caused by the novel coronavirus.

These states include Alabama, Maine, Ohio, Oklahoma, West Virginia, and Wyoming, according to the CDC. The CDC recently relaxed the requirements needed for people to qualify for testing.

Researchers from the Australian National University (ANU) have looked at seven outbreak scenarios and how those various scenarios may affect the world’s wealth.

The researcher’s best case scenario predicts a global GDP loss of $2.4 trillion and a death toll of 15 million, according to Business Insider.

In the worst case scenario, the global death toll could reach a staggering 68 million people.

The Guardian has published before and after photos of typically busy locations throughout the world emptied of people due to the viruses’ spread.

Bethlehem’s streets appeared empty on Friday with the exception of masked Palestinian police patrolling the area. On Thursday, Palestinian President Mahmoud Abbas declared a 30-day state of emergency after cases were reported in Bethlehem.

While some cities and countries have put a moratorium on large public gatherings with or without a declared state of emergency, others are operating as normal. Unfortunately in those areas, some people are providing perfect examples as to why some feel moratoriums are the safest route.

It was revealed on Friday that a New Zealand man who has been confirmed to be infected with the virus attended a crowded Tool concert in Auckland on February 28. The man, who is in his 30s, attended the concert only days after returning from northern Italy with his partner who also has COVID-19.

On Thursday, in what had been the country’s high single-day increase, Italy reported 41 new deaths bringing the country’s total to 148. The total dead has since increased to 197. Italy has the second highest death rate behind that of China.

The first COVID-19 death has been reported in the UK as the number of cases doubled over a 48-hour period as Europe experiences a shortage in medicines and face masks due to disruptions in the supply caused by the novel coronavirus outbreak. Yahoo reports that many countries throughout the world rely on China for both drugs and drug ingredients.

Singapore minister and co-head of the country’s virus taskforce, Lawrence Wong, says that the coronavirus is “starting to look like a global pandemic.”

According to the Guardian, a Chinese official visiting Wuhan was heckled by local residents who yelled “fake, fake, everything is fake” as she inspected work related to quarantined residents.

Chinese state media surprisingly reported, rather than censored, videos of this nature. According to a government-affiliated WeChat account, the fakes surrounding the incident were “basically true.“

Also in China, the Chinese outlet that had previously reported the story of a recovered COVID-19 patient who later died after testing negative for the virus and being discharged, removed the report.

COVID-19 Cases Explode Across the US

The U.S. state of Indiana has declared a public heath emergency as the Indiana State Department of Health announced a patient who tested positive for COVID-19 in Marion County. According to reports, the person had recently traveled to Boston.

“With the help of our federal, state and local partners, Indiana is responding to this case as we have planned and prepared for weeks. The Hoosier who has been diagnosed has taken responsible steps to stay isolated.”

Additional U.S. states including Colorado, Maryland, and Nevada have reported their first cases of the novel coronavirus.

U.S. President Donald Trump cancelled his scheduled visit to the Centers for Disease Control and Prevention (CDC) Atlanta headquarters, according to a senior White House official.

Houston has announced the city’s sixth case. May Sylvester Turner said, “There remains no evidence of community spread, no need to alter our normal activity in Houston and certainly no reason to let fear grip our lives.”

The number of people quarantined in New York City continues to increase. According to the New York Times, the city’s Department of Health is monitoring 2,773 people who are currently self-quarantining at home. Most of those being monitored had recently returned from China, Italy, Iran, South Korea, and Japan, according to New York City health commissioner, Dr. Oxiris Barbot.

The Daily Beast reports that New York City has 22 confirmed cases as of Thursday afternoon, as the city prepares for “mayhem.”

“We are going to see more cases like this as community transmission becomes more common. We want New Yorkers to be prepared and vigilant, not alarmed. We are taking the same decisive steps in every case to shut transmission down: isolate and test each suspected case, trace close contacts, and isolate and test them as well.”

Local Seattle outlet KOMO has confirmed that the area’s first quarantine village will utilize an EconoLodge hotel in Kent, WA. KOMO reports that Seattle and King country will establish three quarantine villages total and that no public announcement has been made thus far.

“I find this very interesting. Media gathering for a tour arrange by King Co at the Econolodge in Kent the new location for a quarantine village for COVID-19 patients but motel employees they have no clue motel’s new purpose. Receptionist didn’t know anything.”

I find this very interesting. Media gathering for a tour arrange by King Co at the Econolodge in Kent the new location for a quarantine village for #Covid_19 patients but motel employees they have no clue motel’s new purpose. Receptionist didn’t know anything #komonews pic.twitter.com/jFM8CpXPrm

Also in Washington, families of residents at the nursing home at the center of the Seattle-area COVID-19 outbreak are speaking out. During a live press conference, families detailed their varied experiences in receiving contradictory information.

Over 20,000 people have signed an online petition demanding that Lake Washington School District (LWSD) cancel classes amid the outbreak in Washington state. LWSD said in a statement, “School closures can be disruptive and costly for families.”

Jeffrey Duchin, health officer for both Seattle and King County, allegedly asked, “Do we really want to close schools or do we want to keep schools open so faculty can continue to come in and serve children?”

7,000
Approximate number of absences in the @Northshore_SD on Monday.
The entire district is closed today for #Coronavirus cleaning and training.
There are 23,577 students. 33 schools.
That’s about 1 in 3 students calling in sick. @KING5Seattle pic.twitter.com/budoEpcHUQ

Please check out yesterday’s update and video if you missed them, and look for our next article summarizing recent developments.

Be sure to follow @COVID19report on Telegram for updates.