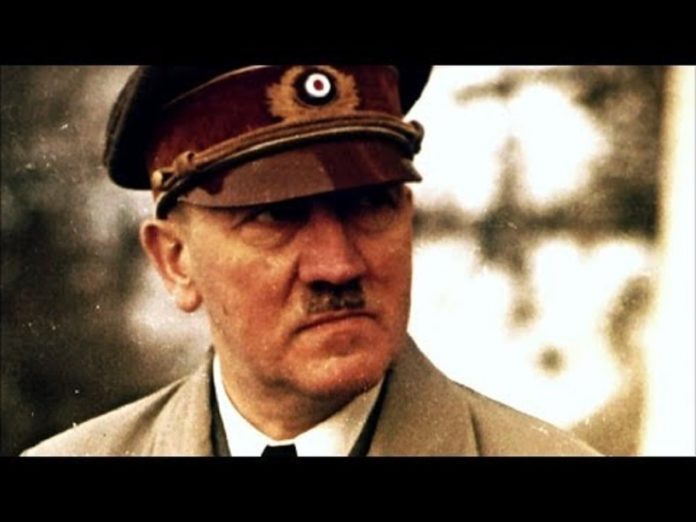 This propaganda footage, shot right before the fall of the Third Reich, was supposed to be destroyed. And for good reason – it reveals the medical condition Hitler tried to hide.

Abraham Lieberman wrote a classic treatise entitled, ‘Adolf Hitler had post-encephalitic Parkinsonism’ in 1992 that was published in the journal Parkinson’s Disease & Related Disorders. After rummaging through a host of literature, he affirmed that the illness was of the post-encephalitic variety. Importantly, Hitler’s last remains were destroyed by his sworn and committed army minutes after he committed suicide on the 30th April, 1945 and only a part of his lower jaw could be recovered and therefore, no autopsy on his brain could be performed.

Lieberman stated that the illness started in 1933-1934 when Hitler was around 45 years of age and his close associates were aware of the fact and though his physicians knew he had tremor, nobody diagnosed it as Parkinsonism. It has been said that Lindin, Hitler’s ophthalmologist, first diagnosed the condition and Max de Crinis, a member of the Nazi Party, a professor of psychiatry and medical expert for the Action T4 Euthanasia Program, informed Heinrich Himmler, the military commander, about his ailment. Initially, the tremor was intermittent and Hitler used to conceal it by tucking his left hand in his pocket or holding some object, for example, a cane stick.

As the disease advanced he made lesser public appearance and allowed himself to be photographed only from angles that did not reveal his shaking left hand. Hitler dearly wanted to keep his ailment a secret since he feared that the Germans would associate his tremor with senility and this symptom was not mentioned in the memoirs of men close to him, with the exception of Speer, Hitler’s Armament Minister. His biographers too, were shy about expounding on it.

The general view is that Hitler’s Parkinsonism came to light for the first time in 1945 when a Swedish newsreel was smuggled out deluding German vigilance. It shows Hitler walking slowly with diminished swing in the left hand, suggesting bradykinesia, along with masked face, stooped posture, and rest tremor. Other sources that hinted at his illness include photographs, eyewitness reports, physician’s prescriptions, and his declining handwriting and the resultant micrographia.

Speer wrote in his memoirs;

“In 1944 Hitler was shriveling up like an old man. His limbs trembled, he walked stooped with dragging footsteps. His uniform, which in the past he had kept scrupulously neat was stained by the food he had eaten with a shaking hand, his right hand, indicating that, in 1944, his Parkinsonism was bilateral.”

“Hitler developed a tremor which affected only his left side. It is possible that his tremor developed sometime in mid-30s. His left arm was kept hanging down and he dragged his left foot. His speech was low pitched and hardly intelligible. His facial expression became rigid and saliva occasionally escaped from the corner of his mouth.”

And finally William Shirer, author of ‘The Rise and Fall of the Third Reich’, described;

“The generals who assembled at the Führers headquarters at Ziegenberg on the evening of December 12th, … found the Nazi warlord … ‘a stooped figure with a pale and puffy face, hunched in his chair. His hands trembling, his left arm subject to a violent twitching which he did his best to conceal. When he walked, he dragged one leg behind him.”