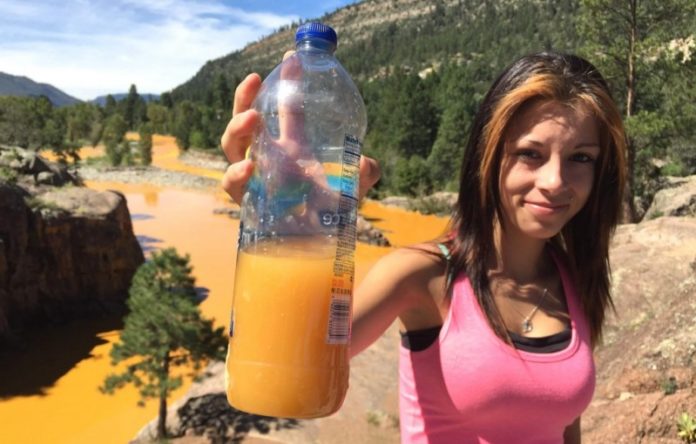 A toxic waste spill from an environmental disposal mine was accidentally released by the US Environmental Protection Agency (EPA), contaminating water supplies in three US states.

The spill occurred as a group of EPA workers excavated the entrance to the dormant Gold King Mine situated near Silverton, Colorado. Heavy metal-laden mining waste spilled from the breached mine into rivers in Colorado, Utah and New Mexico, turning the waters a sickly shade of orange. The EPA has since admitted that the spill was caused by its team using heavy equipment to enter the mine, before routinely beginning the process of pumping and treating the toxic water contained inside.

Durango, Colorado: EPA’s Animas River mine disaster. Before & after : pic.twitter.com/Wi9g0I6Qr7

3 million gallons of waterwaste containing high levels of arsenic, lead and cadmium has since escaped into the Anima River and traveled roughly 300 miles to Lake Powell on the Arizona-Utah border, causing a number of disastrous effects. Residents in towns reliant on the affected rivers were cut off from their water supply overnight and forced onto emergency water rations. Local farmers were forced to find an alternative supply of water for their crops and livestock, while the long term effects on the local wildlife is still uncertain. In addition, the areas tourist season was also significantly affected, causing a massive loss for towns dependent on the rivers recreational offerings.

As reported by the Guardian, since the incident, officials at the EPA have been reluctant to disclose any information about the environmental and health impacts of the spill. However, newly released internal documents from the EPA have revealed that mangers at the Environmental Protection Agency were warned of the risks of a spill prior to the incident. According to the document, government contractors had told the EPA that conditions at the abandoned mine “could result in a blowout” of toxic wastewater.

Although EPA officials have stated that recent water tests show that the contamination levels have fallen back to prespill levels, some experts have said the heavy metals have merely sunk to the bottom of the rivers, and are likely to re-enter the water. According to reports the EPA has even admitted that damage caused by the spill could stretch years into the future.

Currently, the agency is working to confirm that no additional reserves of tainted water still remains. A timeline for this procedure has not yet been specified.

This Article (Toxic EPA Spill Taints Water Supplies In 3 States And Causes Unknown Damage To The Environment) is free and open source. You have permission to republish this article under a Creative Commons license with attribution to the author and AnonHQ.com.