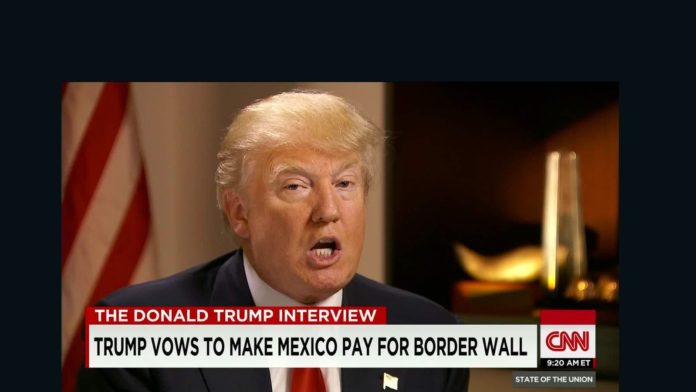 Donald Trump is a controversial figure to say the least, and his own mouth has proven to be his own worst enemy of late, revealing what a horrible human being he is over and over again.

“Operation Wetback” was so named after the derogatory term for Mexican immigrants; it was one of the largest cases of forced expulsions in American history, with nearly a million families torn apart.

The original architect of the program, Attorney Herbert Brownell Junior, had notably originally suggested to “shoot the wetbacks crossing into the U.S.”

“Brownell said, ‘Just give them some live ammo, let them shoot a few people. Then everyone will be scared and they won’t come across the border,” he said. “Really humane.”

From the Texas State Historical Association:

“Operation Wetback was a repatriation project of the United States Immigration and Naturalization Service to remove undocumented Mexican immigrants (pejoratively referred to as “wetbacks”) from the Southwest. [It was] a national reaction against illegal immigration, began in Texas in mid-July 1954. Headed by the commissioner of Immigration and Naturalization Service, Gen. Joseph May Swing, the United States Border Patrol, aided by municipal, county, state, and federal authorities, as well as the military, began a quasi-military operation of search and seizure of all unauthorized immigrants.”

Illegal immigrants caught crossing the border were simply captured in the hundreds of thousands, and left in deserts.

In 1955, there was a single case where hundreds of them were simply dropped off in a desert south of Mexicali, Mexico. No food or water was provided, and 88 were killed by the heat… and the sheer cruelty of the American government… before the Red Cross could get to them.

25% of the illegal immigrants deported at the time were also loaded onto cargo ships, into small and cramped quarters like human cargo. The conditions were described as being similar to an “eighteenth century slave ship” and “penal hell ship.”

While illegal immigration might be a problem in the US, let us not forget that these are fellow human beings we are talking about… fleeing countries that are for all intents and purposes weakened specifically because of the US.

I’m not kidding. For example, take a look at the war on drugs: the US literally trained the core of the Los Zetas, the most violent and active cartel in Mexico.

The US had also sold weapons to the Los Zetas and the Gulf Cartel, and in Operation Fast and Furious “lost track of” most of the guns they were purposely allowing legal firearms dealers to sell to illegal straw buyers.

Guns “tracked” by the US were famously found at the crime scenes of on both sides of the border, including at the murder of a US border patrol agent.

Over 2,000 guns are estimated to have been illegally trafficked from the US and into Mexico DAILY.

And let us not forget that the US provides these drug cartels with their biggest customer, the American citizen: 24.6 million Americans over the age of 12 use drugs in the US, or one in ten. While marijuana might seem fairly safe to the American user, its growth and illicit transit via violent Mexican drug cartels has caused the deaths of innocent Mexicans.

If you train and arm a drug cartel, then buy its drugs which allows them to buy more of your guns… you’d expect Mexicans to flee their country. Put YOURSELF in their shoes, Trump.

Which is why Donald Trump’s support of an initiative that has cost hundreds of lives, while attempting to push all the blame onto these powerless migrants in order to dehumanize them so that he can justify another similar move, is heinous beyond comprehension.

This Article (Trump Wants To Round Up “Wetbacks” and Leave Them In The Dessert) is free and open source. You have permission to republish this article under a Creative Commons license with attribution to the author(CoNN) and AnonHQ.com.