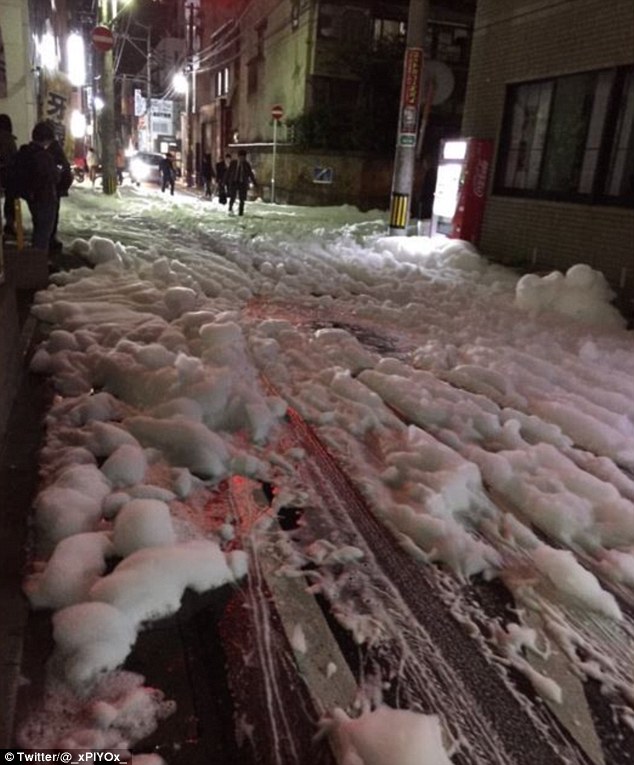 After disastrous tremors from a 7.3-magnitude earthquake shook the city of Fukuoka on April 15 – just a day after a 6.5-magnitude earthquake rattled the same area – the streets of downtown Tenjin and Imaizumi were covered with a thick layer of mysterious foam, sending shivers down the spines of its residents.

While people posted photos and a video of the unexplained froth on Twitter, which led many to wonder what may be behind the snow-like layer engulfing Fukuoka, there are speculations that one of the many tremors may have caused an underground water pipe to burst. Others have suggested that the foam was caused by a spillage of fire-fighting foam; however, no fire trucks were spotted in the area, and no one has come up with an official confirmation as of yet.

The two powerful earthquakes killed 48, injured over 1,100, left 410,000 homes without water and 200,000 with no power, and destroyed as many as 9,900 homes, leaving more than 100,000 residents in shelters. 765 aftershocks have hit the Kyushu Island since the 6.5-magnitude earthquake on April 14. The tremors also triggered an eruption in Mount Aso, Japan’s largest active volcano.

This Article (Twin Earthquakes Blanket Japanese City With Mysterious Foam [Photos & Videos]) is free and open source. You have permission to republish this article under a Creative Commons license with attribution to the author and AnonHQ.com.