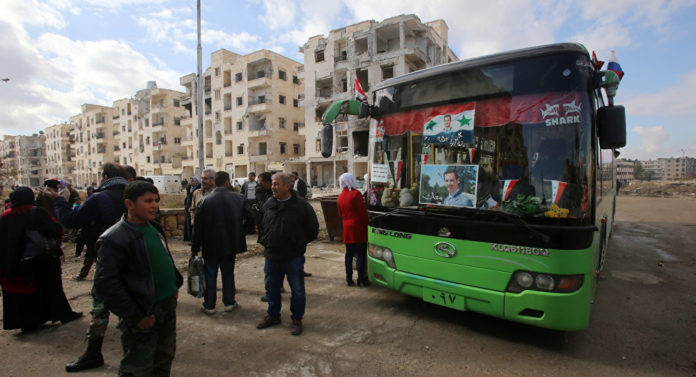 The proxy war continues in Syria as the U.S-backed moderate rebels fight against the Assad government.  Over the last 5 or so years, mainstream media have continually picked one side, supporting the US government line, however, these people supported have shown the world how they’ve held the city of Aleppo with anger, violence, intimidation and death.

According to a recent report, more than twenty buses sent for humanitarian purposes to help the sick and injured were bombed by U.S.-backed moderate rebels while en route. Many of the bus drivers were killed, while those who managed to survive were taken as hostages.

The attack prevented the Syrian government’s efforts to empty the war-affected areas in an attempt to lessen the increasing humanitarian crisis. While the western media busily reporting that Assad’s forces weren’t allowing humanitarian aid into Aleppo, amateur videos exposed the American-backed rebels (partially funded by the American tax dollar) as the ones guilty of perpetuating the aggressive behaviour they accused Assad of committing.

While there are many mainstream media outlets that simply deny and filter this type of news, many were unable to accomplish it in this instance.

“Several buses en route to evacuate the sick and injured from two government-held villages in Syria’s Idlib province have been burned by rebels,” the BBC reported, also unable to maintain the MSM bias of the Assad government’s guilt. “The convoy was travelling to Foah and Kefraya, besieged by rebel fighters. Pro-government forces are demanding people be allowed to leave the mainly Shia villages in order for the evacuation of east Aleppo to restart.”

Contrary to what the western media claims concerning the genocidal atrocities in Aleppo – that for some reason, lacks the evidence to support it – Twitter exploded with evidence from people posting videos and pictures of the U.S-backed insurgent attacks on the humanitarian buses.

Currently, the issue with the western media is their consistent mimicry of the U.S. government line. Rather, they fail to report on the arms changing hands, and the secret partnerships between Fronts and Armies. When the Syrian Government labels a force as a terrorist organisation, it requires serious consideration and face value merits – because there is cooperation between the moderate rebels who are in place to assist the Americans in their efforts to remove Assad from power.

Those wondering what happened to drivers of the burnt busses now have their answer according to #Syrian opp activist pic.twitter.com/Bz9y5bgl7P

Nonetheless, keep in mind of a time when a genuine insurgent group that was against Assad’s government existed – and it was purely homegrown. But those people have long since been dissolved by outer powers and funds, and the agenda is now to destroy Assad’s government and for the U.S. to place a puppet regime in the house.

If a United States citizen only understood a fraction of whom they were supporting in Syria, perhaps a halt in U.S. tax dollars would see a dramatic change in the Syrian ‘Civil’ War.

This article (Humanitarian Buses in Aleppo Firebombed by U.S-Backed Moderate Rebels) is a free and open source. You have permission to republish this article under a Creative Commons license with attribution to the author and AnonHQ.com.