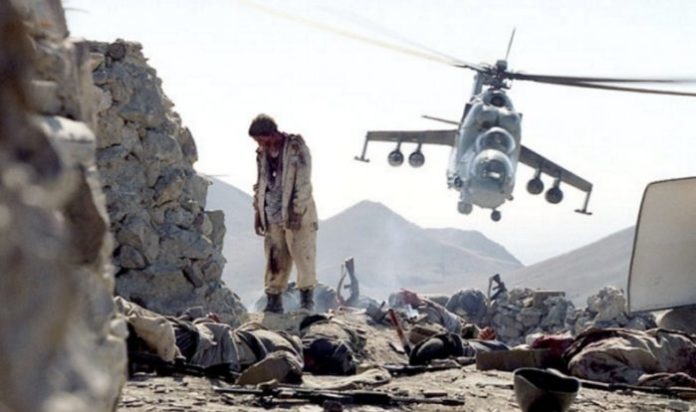 At the beginning of the invasion, the man in the oval office then, George W Bush, said the main goal was to dismantle al-Qaeda and to deny it a safe base of operations in Afghanistan by removing the Taliban from power. As it later became clear that Bush and his European war cohorts had no business invading Afghanistan, the United States government turned to propaganda news coverage through the mainstream media, trying to justify why it was necessary for the country to go to war in the Middle East, including the Iraqi war.

During Barack Obama’s presidential campaign in 2008, he promised to end the needless wars waged by the country in the Middle East. Particularly, he said he would withdraw all United States soldiers from Afghanistan, as the war has no merit.

Although Obama was able to withdraw some United States and NATO troops between 2011 and 2016, transferring many combat roles to the Afghan security forces, there still remain some coalition soldiers, led by the United States, fighting in the country.

However, as the fight continues in Afghanistan, civilians’ lives are at peril. The death toll among civilians has risen as a result of United States-led air-to-ground attacks in civilian populated areas in the country.

On February 9, 2017, the United Nations confirmed that 18 civilians were killed in a United States-led airstrike in Helmand’s Sangin District in Afghanistan. The attacks were reportedly targeting anti-government forces. The United Nations said the dead were all women and children. Although the Pentagon tried to refute the United Nations’ statement, it later admitted that United States warplanes completed 30 bombing raids in the area, including the strikes believed to have caused the civilian deaths. Of course, the United States would always describe such brutal killings as so-called ‘collateral damage’. Before the civilian deaths revelation, the United Nations Assistance Mission in Afghanistan (UNAMA) had tweeted on February 6, 2017, that it recorded record high civilian death and injuries in Afghanistan the previous year. UNAMA said Afghan civilian casualties’ figures in 2016 – killed or maimed – stood at 11,418.

If even other militant groups in the country have contributed to this record number of civilians’ deaths and injuries, the blood on these innocent lives is on the hands of the United States. Before the illegal United States invasion of the country, these dead or injured civilians were enjoying their lives without fear of death or injury.

This unacceptable and flagrant aggression against innocent lives perpetrated by the United States in Afghanistan, and elsewhere in the world, has led a former top Central Intelligence Agency (CIA) official to comment on the issue.

Jack Rice told Russia Today English that the so-called collateral damage of United States and coalition forces in Afghanistan is driving the country’s civilian population to join militant and other terrorist groups in the country. Mr Rice is now an international law expert, and believes that the United States war against terror in the country is a complete sham. Rice said the rise in civilian casualties in wars waged by the United States in the Middle East and other parts of the world is a single contributing factor to the proliferation of militant and terrorist groups in these areas.

“You continue to see civilians killed in very large numbers – we’ve seen this across Afghanistan, we’ve seen this in northern Pakistan, in Yemen, in part of North Africa. And the real problem is that what you are doing is you are driving the populous into the hands of the opposing parties and to the opposition. And that really cuts exactly against what the Americans and coalition forces are claiming they want right now,” the former CIA officer said. “At this point what is probably going to happen is there would be an apology made, there might even be money that is passed through hands potentially. But I don’t think anybody is going to be held responsible,” Rice said. What is really unfortunate about this, he went on to say, is that this “highlights a fundamental problem of these so-called air-to-ground attacks,” Rice said.

While parading around the world, fighting terrorism and creating ‘collateral damage’ the real terrorists are the ones sitting in Washington. Never buy their lies. They deceive and plunge the American public into useless and needless defense spending, while pressing issues such as poverty are completely ignored.

This article (U.S. Kills/Maims Over 11, 000 Afghan Civilians in 2016, Top CIA Official Reveals this War Makes Civilians Join Terrorist Groups) is a free and open source. You have permission to republish this article under a Creative Commons license with attribution to the author and AnonHQ.com.