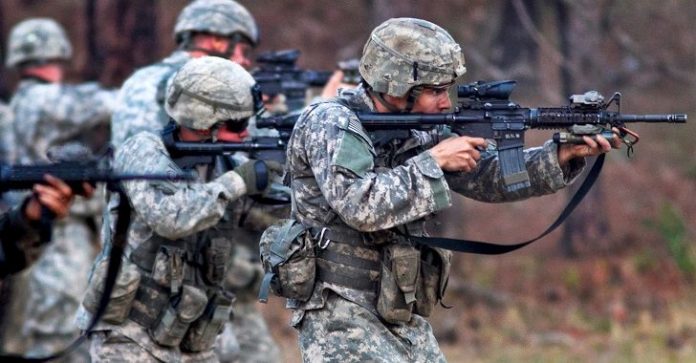 Given the illegality of the move, the real question regarding the operation must focus on the motive. Why is the United States military, under a president who ran on a campaign of focusing less on wars abroad, sending more troops to Syrian territory? Trump supporters often argue this is to fulfill his campaign promise to defeat ISIS.

The first thing to note, however, is that ISIS has already been more or less defeated, with or without American assistance. ISIS currently has one major stronghold left in Iraq, which American air power is currently assisting various Iraqi militias on the ground to crush. The terror group also has one final remaining substantial stronghold in Syria.

If this is the case — and as ISIS soldiers flee Mosul in Iraq and head towards Syria — one is left to wonder why on earth the Trump administration is also sending 1,000 American troops to Kuwait, as well. According to one anonymous official, the Kuwaiti deployment is “about providing options,” whatever that means.

The second thing to note is that since the fall of Saddam Hussein in 2003, Iranian influence has been spreading throughout the Middle East. The biggest winner of the Iraq war was Iran, namely because the United States and the United Kingdom ousted Saddam Hussein, a Sunni who spent years bombing and gassing Iranians. Shortly after, Hussein was replaced by a U.S.-backed, Shia-led government that was able to align itself with Tehran. In 2005, Iran formed a formal defense agreement with Syria, creating a three country-strong wedge between NATO and the Caucasus region, which was further strengthened with the addition of Lebanon, which is home to Iran’s proxy army, Hezbollah.

The most complicated aspect of this alliance is the fact that it may soon include Yemen, as a Houthi-led insurgency may create an Iranian-aligned government on Saudi Arabia’s border (contrary to what the mainstream media claims, Iran’s support for the Houthi movement is incredibly limited, but the possibility of an alliance with Tehran is very real).

The resistance to this Iranian-led alliance by the U.S.-Israel establishment can be seen in a variety of ways. For example, in 2013, Israel’s ambassador to the U.S., Michael Oren, told the Jerusalem Post:

According to the Post, Oren said this was the case even if the other “bad guys” were affiliated with al-Qaeda.

In the case of Iraq and Syria, Iran’s influence has been integral in recent developments. Iranian militias have already done the bulk of anti-ISIS fighting on the ground in Iraq, yet the U.S. wants to swoop in at the final stages and claim a victory they have ultimately contributed very little towards.

On top of this, Saudi Arabia is also sending ground troops to Syria with the express purpose of preventing liberated areas of Syria from falling into the hands of Syria, Iran, and/or Hezbollah.

The United States and its allies are now illegally moving into Syrian territory for one main purpose: to shape the outcome of the battle. Even though Iran, Russia, Saudi Arabia, and the United States officially all have the same goal of defeating ISIS, in reality, they all disagree on what should follow.

“The upshot is that it’s still unclear who will take Raqqa when Mosul falls,” said one senior official involved in discussions, as reported by the Guardian. “The Americans are still hedging on the Kurds, even though the Turks are adamantly opposed. The Russians want the Syrian army and the rebels to do it, under their tutelage.”

The only question that matters now is to what extent Saudi Arabia and the U.S. will go to enforce their desired outcome on the Syrian regime. Will they fight off Iranian and Syrian troops, which will only further complicate the battle arena as Russia provides unquestionable air power to the aforementioned troops on the ground?

With the presidency of Donald Trump, Vladimir Putin has lost his monopoly on unpredictability and his ability to outmaneuver the United States’ foreign policy goals in the Middle East. This is because of how reckless Trump is proving himself to be.

In order to avoid a catastrophic war, the Americans and the Saudis may be relying on the fact that their presence there may act as a deterrence to the Syrians and Iranians. If possible, this would ensure that Syrian troops stay well clear of those areas occupied by American troops, and as such, avoid coming under fire. If that is the case, it is still unclear what international legal principle gives the United States the right to take territory from the Syrian government and hand it over to its allies on the ground, a move that may, in essence, be a deal-breaker for Syria, Iran and/or Russia.

One thing is clear, however. The Trump administration will not willingly allow an outright victory for Iran and Russia in Syria. Despite ramping up his anti-Iran rhetoric while claiming to be less concerned with the Assad government in Syria, Trump is evidently keeping open the Syrian military option laid out for him by Barack Obama as a means of directly targeting Iran.

How will this end?