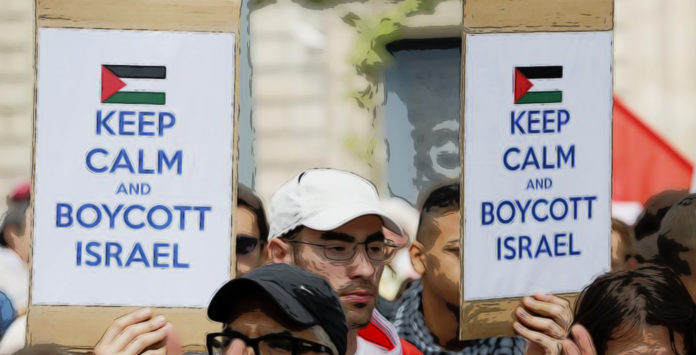 United Kingdom — It’s been another bloody week in Palestine. A horrific video of a disabled man being tipped out of his wheelchair by an Israeli officer went viral, while equally graphic footage emerged of a 14-year-old girl lying in her own blood after being shot by the Israeli army. At the same time, Palestinian journalist Mohammed al-Qiq is dying in an Israeli hospital on his 83rd day of hunger strike as he protests being held without trial.

Wherever there is injustice, look to Britain

Here in Britain, we are used to our government rolling out the red carpet for dictators. We roll our eyes at the propping up of brutal regimes and the unrestricted flow of arms to global human rights abusers — all while sighing at our historical meddling in foreign affairs and the turning of a blind eye to Israeli settler colonialism. Our government’s allegiance to militarism goes without saying, and it often seems we are powerless to do much about it.

But we have tools at our disposal to express our dissent. If we believe that public money should be spent on the good of the people — and not thrown at war profiteers — we can choose how we spend it. Right? We can elect those who are free from the central government’s political control to represent us. These are all things within our power as citizens of a democracy. Right?

On February 14th, the U.K. Government announced a proposal to restrict the right of local authorities to use ethical principles when drafting strategies for what they do or don’t spend their money on. The assault on political freedom will ban local councils, public bodies, and some university student unions from boycotting “unethical” companies, and is expected to be formally announced by Cabinet Office Minister Matthew Hancock during an upcoming business trip to Israel.

In short, publicly-funded institutions will no longer have the freedom to refuse to buy goods and services from companies involved in the arms trade, fossil fuels, tobacco products, or Israeli settlements in the occupied West Bank. According to ministers, those that continue to pursue boycotts will face “severe penalties.”

Over the years, many councils in the U.K. have adopted fair trade principles or excluded fossil fuel, tobacco, and arms companies from their investment portfolios amid public pressure. In addition, a number of councils have stated they will not purchase services from companies that support Israel’s decades-long occupation of Palestinian territory.

The new guidelines will protect Israel from the rising pressure of the Boycott, Divestment, and Sanctions (BDS) movement — despite the fact that Israeli settlement expansionism has not only destroyed any hope of a viable Palestinian state, but has been called a war crime by Amnesty International.

Designed to prevent councils from boycotting Israeli companies or public institutions in response to calls by the BDS campaign, campaigners fear the new move could stop councils from divesting from companies operating in illegal settlements (even though the Foreign Office advises businesses against trading with or investing in such companies).

Regardless of your opinion on Israel, Palestine, fossil fuels, or the arms trade, this is a democracy issue. Using a ban on ethical boycotts as a vehicle to shut down dissent is simply further evidence of the moral bankruptcy of the British government. U.K. citizens wanting to add their voice to a governmental consultation on the issue can do so via this simple e-tool, and sign a Freedom to Divest petition here.

This article (UK Bans Citizens from Boycotting Companies for “Ethical Reasons”) is an opinion editorial (OP-ED). The opinions expressed in this article are the author’s own and do not necessarily represent the views of Anti-Media. This article is free and open source. You have permission to republish this article under a Creative Commons license with attribution to Michaela Whitton and theAntiMedia.org. Anti-Media Radio airs weeknights at 11 pm Eastern/8 pm Pacific. If you spot a typo, please email the error and name of the article to [email protected].