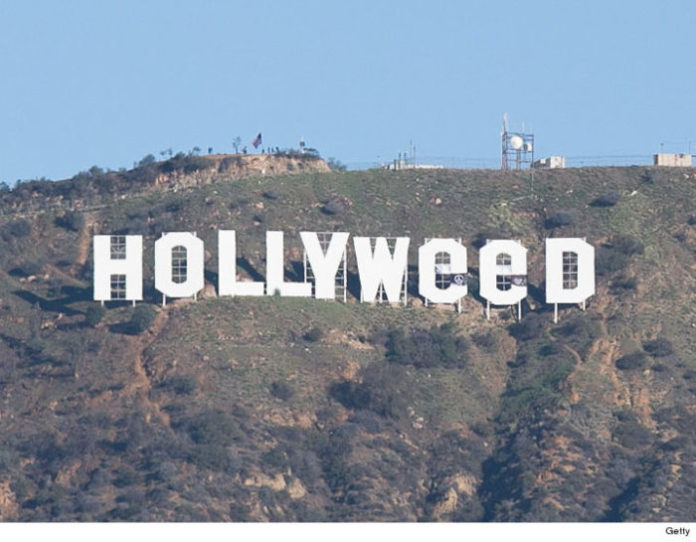 While many people around the world anxiously waited for the New Year’s arrival per the Gregorian calendar, in the United States, somebody was thinking about how to get a single message across to the rest of the world.

Hollywood is a neighborhood in the central region of Los Angeles in the state of California. The neighborhood is home to the American film industry, and has a strong influence over many other nation’s film industries. The Hollywood Hills famous landmark is the iconic sign that boldly spells the word Hollywood. Whenever you travel to LA and you see the sign, you most definitely know you’re in the heart of film industry territory.

But on New Year’s Day, an unidentified person described as a prankster managed to change the iconic sign to read “Hollyweed.” According to Los Angeles Police, the person used tarps to change the O’s in the sign to E’s.

The person reportedly set to work in the night—on New Year’s Eve; and on New Year’s Day, LA residents woke up to a new sign. Residents quickly took to social media, many on Twitter, to share the change. Some happily praised the prankster for getting the important message of weed to the rest of the country and the world on such an important day.

Hollyweed!!! I think security took the night off last night in Hollywood?. pic.twitter.com/ycQXzjsyjG

According to the police, the prankster was caught on security-camera footage between midnight and 2 a.m. local time. The police said it was a man, but couldn’t tell his race or height because it was dark and raining.

The “Hollyweed” sign remained up on the hills until around 11 a.m. on New Year’s Day, before city officials took down the tarps used to change the lettering, reversing it back to its original form.

The police further said there are sensors at the sign that trigger an alarm for police, but because the sensors are only in certain areas of the letters, it is possible to avoid them. The prankster apparently knew about the sensors, and carefully avoided them.

To get to the sign, it is said there is a road accessible to the public by foot and car behind the sign. Police said they believe the prankster came from behind the sign.

IT’S 7:01 AM & I JUST GOT HOME AND THE HOLLYWOOD SIGN SAYS “HOLLYWEED”? REALLY THO GUYS pic.twitter.com/mvRauVrBQH

This isn’t the first time the sign has been altered to mean a different thing. Betsy Isroelit with the Hollywood Sign Trust told a media outlet that the last time the sign was vandalized to read “Hollyweed” was in 1976. According to History.com, a group of students at that time used a tarp to turn the ‘O’s’ into ‘E’s’, in order to celebrate a new law that decriminalized possession of small amounts of weed.  Apart from that, pranksters have altered the sign several times over the years.

In November 2016, California, the most populous state in the U.S. voted to legalize weed for recreational use. This has led the state to become the largest market for weed-based products in the United States. Marijuana is dramatically gaining acceptance among the American public. In 2016, a poll by Gallup revealed that the percentage of American adults who smoke marijuana has nearly doubled in three years. According to the Gallup poll published in August 2016, among the American adults who participated in the survey, one in eight – representing 13% of the respondents used in the poll – reported current marijuana use. In 2013, the same Gallup poll revealed that 7% of American adults smoke marijuana. This means the figure nearly doubled within the last three years, since the first study was conducted.

This article (Hollywood Sign to Read ‘Hollyweed’ on New Year’s Day) is a free and open source. You have permission to republish this article under a Creative Commons license with attribution to the author and AnonHQ.com.