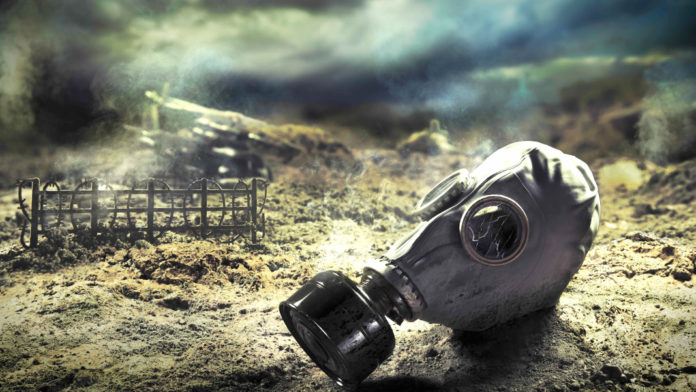 INSURGE Intelligence has released a report containing evidence the U.S. used biological weapons during the Korean War. The report was written in 1952 by the International Scientific Commission (ISC), and was suppressed upon its release.

The Korean War began in 1950 when communist North Korea invaded the undemocratic, anticommunist South Korea. North Korea was part of the Soviet zone, while the South was aligned with the United States.

After the Truman administration persuaded the United Nations Security Council to allow the use of force, General Douglas MacArthur launched an attack that pushed the invading North Korean forces back. Truman then wanted to unite Korea under a U.S.-friendly government; however, as UN forces neared the Chinese border, they were intervened by thousands of Chinese troops.

MacArthur actually wanted to invade China after this, and even suggested the U.S. nuke them. According to historian, Eric Foner, “MacArthur did not fully accept the principle of civilian control of the military,” (Foner, p. 904). After criticizing Truman publicly, MacArthur was removed from command.

Eventually the war settled into a stalemate near the original boundaries of the two Koreas. An armistice was agreed to that essentially restored the Koreas to their original separated states. But a peace treaty ending the Korean War was never created.

This is the basic outline of the Korean War, but what often isn’t reported on or written in history books, are the war crimes committed by the United States government. While more than 33,000 Americans died in the Korean War, the Asian death toll is estimated to be as high as 3 million.

1 million of these were soldiers, the other 2 million were civilians. Most North Korean civilians died of starvation after the U.S. purposefully bombed irrigation systems essential to rice cultivation. That was a war crime. Noam Chomsky explains in the following interview with Democracy Now:

U.S. Korean War veterans testified to corrupt military leadership during the war. Soldiers were commanded to kill crowds of civilians, from infants to the elderly. This included South Koreans, who the U.S. was supposed to defend, and refugees from North Korea who believed they were fleeing to safety. This was also a war crime.

American soldiers who attempted to refuse commands, were threatened to be shot themselves. They of course complied, and for many who returned home, the emotional and psychological scars were worse than the physical ones.

Provided here is the BBC documentary, “Kill ‘Em All: American War Crimes in Korea.” Included in the documentary are testimonies from U.S. war veterans:

With the release of this recent report, we now have evidence of yet another war crime committed by the U.S. during the Korean War; the deployment of biological weapons. As mentioned earlier, General MacArthur wanted to use nuclear weapons against China after their intervention. While Truman refused, it appears the military decided instead to use biological warfare. Both North Korea and China were targets.

Additionally, U.S. POW’s confessed to using such weapons to their North Korean and Chinese captors. When the soldiers were returned, the U.S. government threatened them to renounce their confessions, or face a court martial.

The U.S. government initially denied all accusations of committing war crimes. The ISC was sponsored by the North Korean and Chinese governments to conduct an independent, outside investigation in response to the U.S.’s denial. The commission consisted of numerous scientists from around the world, including Joseph Needham, one of the foremost British scientists of his time.

“The summary report was only some 60 pages long, but the ISC included over 600 pages of documentary material comprising statements from witnesses, including airmen involved in dropping the weaponry, as well as captured enemy agents; reports from doctors; journal articles from the United States; autopsy reports and lab tests; and photos and other materials.”

A text-searchable format of the report has been provided by INSURGE: click here.

Undeniable evidence of the U.S.’s war crimes have come to light over the decades. Grudgingly, the U.S. government has been forced to acknowledge this evidence. Both the mainstream media and White House remain silent with the release of this recent report, and considering current relations with North Korea, no forthcoming statements are expected.

While American society has forgotten what their government did during the Korean War, the North Koreans have not. Kim Jong-un may be a dictator and a tyrant, but the North Korean (and in fact the South Korean and Chinese) people have every reason to hold a grudge. A U.S. president who enjoys engaging in juvenile name-calling, only adds insult to injury. The results of which could potentially be disastrous for the world.