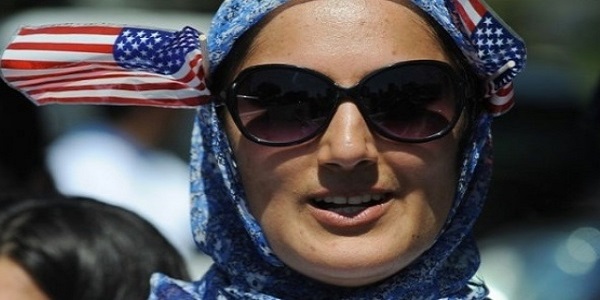 It has been revealed that the government of the United States of America, has accepted a bogus theory put forward by a self-proclaimed former Islamic extremist Dr Tawfik Hamid, which states that hijab wearing is a form of passive terrorism.

According to The Intercept, Dr Hamid is also a fellow at the Potomac Institute for Policy Studies, and has been secretly advising the U.S. government on its Foreign Policy in the Islamic World.

Together with other documents, Dr Hamid’s theory was published in a policy paper authorized by the U.S. Air Force Research Laboratory.

The paper is titled Countering Violent Extremism: Scientific Methods & Strategies. Dr Hamid claims to be an expert in the study of radicalization. With no evidence whatsoever, Dr Hamid theorized that support for militant groups is driven by “sexual deprivation,” and that headscarves worn by Muslim women represent a form of “passive terrorism.”

Below is the chart Dr Hamid used to illustrate his theory. The theory has been described by many observers as bogus and unsubstantiated. The policy paper was reportedly first published in 2011. However, recently following President Obama’s announcement of a national counter-extremism strategy during the past summer, the paper was revised and republished again.

The Intercept reports that the revised copy was published online by the open source research website, Public Intelligence, in January 2016. A preface for the revised report cited a summit convened by Obama on extremism, as a reason for revisiting the subject. President Obama was quoted as saying in the preface “the wisdom contained in this paper collection is more relevant than ever.”

The preface also credited Dr Hamid for providing a “soup to nuts strategic plan” for combating radicalism that “addresses the components of the Islamist terrorism cycle at ideological, psychological, social, and economic levels.”

The Intercept admits that although some of the articles contained in the paper have scholarly merit, and are written by academics and researchers in the field of counterterrorism, thatauthored by Dr Hamid is just ridiculous. Hamid’s chapter in the paper is titled A Strategic Plan to Defeat Radical Islam. With no empirical evidence to support his claim, he stated that support for militancy is primarily a product of sexual deprivation, and that terrorism bears relation to religious dress.

According to him, before U.S. officials can combat terrorism among Muslims, they will have to “address the factors underlying [sexual] deprivation” among young Muslim men, as well as “weakening the hijab phenomenon” among Muslim women.

Hamid further claimed that, along with fundamentalist ideology, the “hijab contributes to the idea of passive terrorism” and represents an implicit refusal to “speak against or actively resist terrorism.” Hamid’s theory of radicalization stated that terrorism stems from a lack of sexual activity among young Muslim men, and that addressing this issue is a key to reducing support for militant groups.

“I believe young Muslims are motivated to join radical groups because of sexual deprivation. Addressing the factors causing deprivation in this life can interrupt the radicalization process and reduce the number of suicide attacks by jihadists,” he wrote in the paper. In all these unsubstantiated claims, Hamid does not make clear how he was able to arrive at these conclusions.

Since the paper was published, some academicians have expressed worry about why the U.S. government could allow such unsubstantiated work to find a place in its policy paper. Some have warned that what Dr Hamid has written could be very offensive to Muslim women, who wear the hijab as part of covering themselves.

A lecturer on terrorism studies at New York University, Arun Kundnani was quoted by the Intercept as saying “This characterization of the hijab demonizes millions of women whose reasons for covering have nothing to do with the advocacy of political violence. The document as a whole includes some scholars who are serious researchers. However it appears the purpose of this chapter by Hamid is not a genuine investigation of the roots of violence, but rather an attempt to supply national security agencies with bogus surveillance rubrics.”

This article (United States Government Accepts Theory that Labels Hijab Wearing as “Passive Terrorism”) is a free and open source. You have permission to republish this article under a Creative Commons license with attribution to the author and AnonHQ.com.