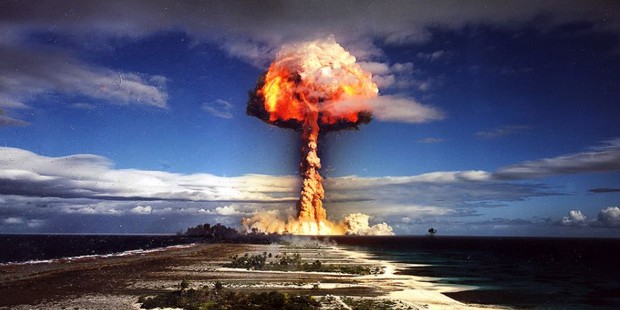 The NNSA (National Nuclear Security Administration) has already provided the approval for the upgrade process pertaining to the B61 Airborne nuclear bomb. And naturally, the Pentagon is overly eager and excited about this new venture. How much does this upgrade cost? A few multi-billion USD and some odd number of years to complete the project.

This nationwide discussion by NNSA, had finally provided the proper authorization for the launch of the program to enter a post-engineering phase, in which then comes four years of steady working and researching. What does this imply? Simply put, these new upgrades are set to start rolling out by the year 2020.

The mighty airplane that will be transporting these new nuclear bombs is the B61. The B61 has long been the base principal for the US airborne nuclear bomb ever since 1968, which also was when the first version had been commissioned. In the past, some of the modifications to this aircraft have been canceled, while other modifications had been “withdrawn from use.”

Lt. Gen. Frank G. Lotz, an administrator for the NNSA said in a statement “Reaching this next phase of the B61-12 LEP is a major achievement for NNSA and the exceptionally talented scientists and engineers whose work underpins this vital national security mission,” he continues, adding “Currently, the B61 contains the oldest components in the US arsenal. The LEP (life extension program) will add at least an additional 20 years to the life of the system.”

The secretary of the Energy, Ernest Moniz proclaims “these life extension programs directly support President Obama’s directive to maintain a safe, secure, and effective nuclear deterrent, while reducing the size of the stockpile,” Moniz continues discussing how the aircraft “once completed, the B61-12 LET will allow for the retirement of the B83-1-the last megaton-class weapon in America’s nuclear arsenal-while supporting the nation’s continued commitment to our national security and that of our allies and partners.”

The Obama administration has started a new journey in which they are planning, and even attempting, to modernize the U.S. Nuclear weapons arsenal in order to keep up with the advancing weapon technologies. So how much does this plan cost? The estimated total for this “upgrade” will be in the ballpark price of $388-billion USD – to be paid by the year 2023. There are various critics in which claim that the total price of this operation can easily reach over the $1 trillion price range.

The YouTube video below, shows a video in which displays the new aircraft that will be the new nuclear transportation vehicle. The B61-12 is showing a test flight in the video.


Dmitry Peskov, the president of Vladimir Putin’s press secretary states “the experts need to give their opinion about this.” While all of this is taking place, Senator Viktor Ozerov had informed the RIA about Russia’s nuclear scientists, who will overlooking the US Nuclear plans, in order to take the needed precautionary steps to get a handle on the proposed threat – provided that any threat from the United States is deemed necessary against the Russians.

“No doubt, our nuclear weapons specialists will carefully study the level of threat and will take measures to minimize it, if needed,” reported Ozerov in his statement.

Rob van Riet, the coordinator for the disarmament program located at the World Future Council foundation, informed Sputnik that those decisions would be more harmful towards the nuclear security, ultimately leading to those weapons being used by accident.

Riet stated in an interview “the decision to extend the life span of [or] modernize the system is an unnecessary of advancing nuclear security and disarmament. These weapons are a remnant of the Cold War.”

This discussion, bestowed by the NNSA had prolonged the long-lasting life of the B61-12; the United States Air Force had also announced their plans to move forward with the provided proposals, in order to fully replace their current intercontinental ballistic missile and nuclear cruise missile with the new proposed programs.

According to the reports by RT, The GBSD – Ground Base Strategic Deterrent – will be replacing the Minutemen III ICBM, the Long Range Standoff (LRSO) weapons, as well as the AGM-86B Air Launched Cruise Missile. The supporters, otherwise referred to as backers, claim that this program will be vital towards the maintenance on the US Nuclear Deterrent.

The Defense News was covering a topic of this matter, when Major General Scott Jansson of the Air Force stated “this request for proposals is the next step to ensuring the nation’s ICBM leg of the nuclear triad remains safe, secure and effective.”

This article (United States Planning on “Upgrading” their Nuclear Bomb) is a free and open source. You have permission to republish this article under a Creative Commons license with attribution to the author and AnonHQ.