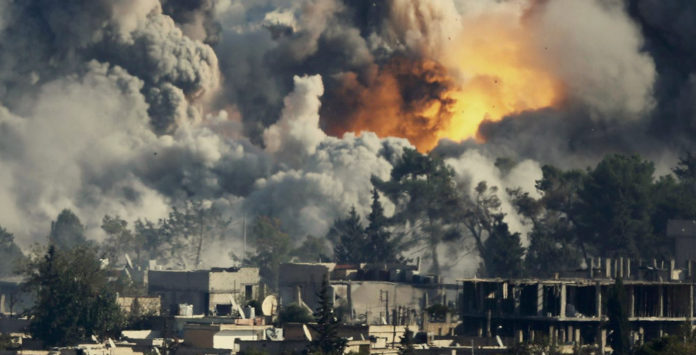 (ANTIWAR) As reported Tuesday, an early morning US airstrike against the city of Shadadi killed 15 civilians outside a bakery. This incident was the start of a flurry of US airstrikes in Syria’s northeast which, over the past 48 hours, have left at least 38 civilians dead, according to the Syrian Observatory for Human Rights.

Three villages near Shadadi were targeted early Thursday morning, killing another 15 civilians, including three children, while eight more civilians were killed in airstrikes elsewhere around the region. A separate strike in the town of al-Houl did manage to kill 35 ISIS fighters, however.

The US has been escalating its involvement in Syria in recent days with these airstrikes, but apart from al-Houl seems to be having limited success, and also causing a lot of civilian casualties. While the Pentagon generally disputes civilian deaths, the incidents are fueling concern from human rights groups.

The inaccuracy of the Hasakeh strikes, coming in the only Syrian province which has US ground troops, also adds to doubts about the intelligence upon which the US coalition is basing its airstrikes around Syria. Clearly, strikes like the bakery give the appearance of using the “signature strikes” tactic, just bombing anything on the ground that the pilot thinks might be important.

This article (US Airstrikes Kill 38 Civilians Over 48 Hours) originally appeared onAntiWar.com and was used with permission.