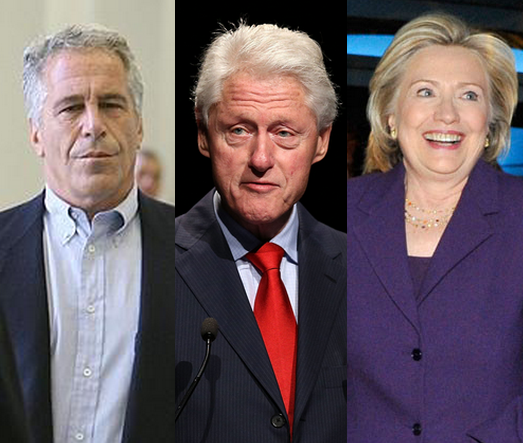 (Collective Evolution) For anyone who’s educated on the prevalence of the type of criminal activity mentioned in this article, it should come as no surprise. Ever since Jeffrey Epstein became a popular name in the mainstream media as well as NIVXM, more people have discovered just how deep this type of corruption goes. Perhaps it was also the recent conviction of one of the highest ranking Vatican officials, Cardinal George Pell, who was convicted on 5 counts of child sexual abuse that ‘woke up’ more people. There are many examples to choose from, most of which don’t really get the attention they deserve from mainstream media. Perhaps that’s because some of the owners of these networks are involved in this type of activity? We’ll get to that later.

The point is, pedophilia and the trafficking of women and children in North America alone involve some of the most powerful people on the planet, and that’s exactly how they’ve remained under the radar for so long. Those who are involved in these scandals often sit above the law, and again, have access to great power.

The NXIVM case was a great example of that. It implicated not only the supposed leader (or fall guy), Keith Raniere, but also multiple Hollywood actors and the financial elite like Clare Bronfman, whose family is in business with the Rothschild family. India Oxenberg was also implicated, and her mother is also an actress and her grandmother is Princess Elizabeth of Yugoslavia. In billionaire sex offender Jeffrey Epstein’s case, who was recently arrested for child trafficking, multiple accusers have named people like Prince Andrew, another member of the Royal Family. One example is Virginia Roberts Giuffre, pictured here with Prince Andrew. She claims that she was loaned out by Epstein to people like Prince Andrew as a young teenager.

Let’s not forget about Sir Jimmy Savile, a BBC children’s television presenter feted by the Royal Family and Downing Street, who abused 450 victims, mostly boys and girls as young as eight for over 50 years. While Savile had long been seen as odd, the scale of his offences shocked the country. He was even allowed special access to hospitals, and the authorities laughed at or ignored his victims before he died a national hero. He was very close with the Royal Family, too.

NXIVM was also an illegal donor to Hillary Clinton’s campaign, and Bill Clinton has been connected to Epstein for a very long time and has been accused by multiple women of rape.

There are so many examples of the State Department being implicated, too. Ex-Nebraska policewoman, Kathryn Bolkovac, who served as a UN peacekeeper and worked under DynCorp, a military contractor, spoke out about elite level sex trafficking involving the UN, the State Department, and the Military. You can read more about that here.

Again, there are dozens of examples that go beyond what’s come out recently. Take Peter McKelvie, a former Child Protection Chief in the UK, for example. He gained attention when he claimed that senior politicians, military figures, and even people linked to the Royal Family were alleged abusers. While working in Hereford and Worcester, he helped to convict notorious child abuser Peter Righton, who was once one of the country’s most respected authorities on childcare. This highlights a great point, and something that I’ve come across multiple times in my research. Sadly, many people who work for national childcare protection programs are directly involved in this type of thing. McKelvie  is one of many who told the world that these types of powerful VIP pedophile rings have been running in secrecy for multiple years. (source)

Pretty crazy, isn’t it? Above are some strange things to be weary of, but not all who were acquaintances with Jeffrey Epstein were involved in sex trafficking as well as pedophilia. That wouldn’t be smart to assume, and would make many guilty by simple association. But new names have emerged from the “black book” of Epstein, and they include Britain’s former Prime Minister Tony Blair, Bill Cosby, former Secretaries of State Henry Kissinger and John Kerry, media mogul Rupert Murdoch, and many more.

As mentioned above, the US Court of Appeals may be releasing 2,000 pages of documents exposing sex crimes committed by powerful politicians, businessmen and foreign leaders.

A judge could decide on July 24 how and when to unseal a trove of documents — some 2,000 pages worth — in connection with a civil lawsuit filed by an Epstein accuser against his one-time companion Ghislaine Maxwell. The papers may reveal allegations of sexual abuse involving people described in court filings as “prominent individuals.”

That civil suit and its remnants have been in the courts for four years. But, in a startling coincidence of timing, an appeals panel ruled just three days before the wealthy financier was taken into custody on July 6 that the documents should be unsealed. The long-running Epstein saga entered a new chapter.

Epstein — who traveled in political, social and financial circles for more than 30 years — pleaded not guilty to charges that he sexually exploited and abused dozens of girls from 2002 to 2005. Some of his accusers have said they were  loaned out to other men.

Based On Our Research, This Goes Much Deeper Than What We’re Seeing Now

Based on our research here at CE, this type of activity is rampant among the powerful elite. It’s hard to tell precisely who, and it’s definitely not all of them. They are involved in some pretty psychopathic behaviour that involves the ritualistic satanic abuse and murder of children, cannibalism, and much more. I’m not going to try and ‘prove’ this to you, as it’s another topic that requires a deeper and detailed article, but I believe it’s important to mention. You can read, for example, about Satanism within the Vatican here. In the article it suggests that children are needed for certain rituals, and you will get information on that if you watch the interview linked below.

The International Tribunal For Natural Justice (ITFNJ) has been doing a lot of great work to expose this type of activity among the global elite.

The idea that many of our world leaders, philanthropists, and more are involved in such disturbing behaviour shouldn’t be too hard to believe. I’ve said it before and I’ll say it again, there is so much evidence showing that select members of the global financial elite (various members of big politics, corporations, hollywood, royal families, and people in positions of great power, the Vatican, etc.) are engaged in some very psychopathic behaviour. But are you really surprised? Look at the world and its systems and all aspects that surround humanity. It’s truly a reflection of psychopathic ‘leaders.’ And it’s a reflection of us being totally oblivious to it as a result of mass brainwashing. Still, in many cases, we support and stand up for these systems, and accept no other way… We often refuse to acknowledge things that any fairly intelligent person should be able to see with a bit of investigation because it threatens our belief systems.

Anneke Lucas is an author, speaker, advocate for child sex trafficking victims, founder of the non-profit organization Liberation Prison Yoga, and creator of the Unconditional Model.

Her work is based off her 30-year journey to restore her mental and physical wellbeing after surviving some of the worst atrocities known to humankind before the age of 12. Sold as a young child into a murderous pedophile network by her family, she was rescued after nearly six years of abuse and torture.

We conducted an interview with her. Below is a clip from the four part series, as it was a very long and detailed interview. You can access the full interview HERE on CETV, a platform we created to help combat internet censorship and allow us to continue to do our work and get the word out about various issues and topics.