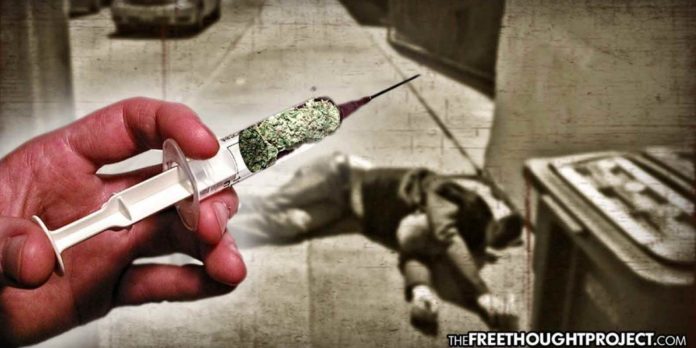 (TFTP) Fox News is no stranger to hating on weed. In fact, the Free Thought Project has reported on their insane reefer madness several times before. However, on this Thursday’s episode of Fox New’s Outnumbered, the propaganda and utter ignorance hit a new high—no pun intended—as David Avella, the president of GOPAC, claimed that people are laying in the street “having just shot up with marijuana.” Seriously.

During the segment, Avella was discussing a recently proposed resolution that recommends convicted felons be referred to as “formerly incarcerated person” or former “justice-involved” person or “returning resident” — instead of felon.

“We don’t want people to be forever labeled for the worst things that they have done,” Supervisor Matt Haney said to the San Francisco Chronicle. “We want them ultimately to become contributing citizens, and referring to them as felons is like a scarlet letter that they can never get away from.”

This is certainly a worthy point, but making it an issue of semantics is plain silly. Instead of changing terminology how about we stop convicting people of felony “crimes” when there is no victim? That way, we won’t have to worry about them being “forever labeled.” But I digress.

During the segment on Fox News, Avella claimed that this attitude behind attempting to help those who’ve been incarcerated is leading to major problems — like people pooping in the street. While some of the folks pooping in the street may have been in jail before, many of them have not, making Avella’s point moot.

He then went on to make one of the most hilarious and utterly stupid claims we’ve ever reported on here at TFTP. The claim is so silly that it has long been the subject of internet memes for years — claiming people are shooting up marijuana. 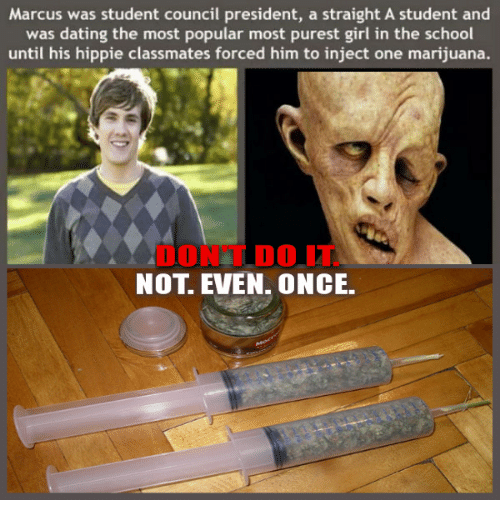 “California has tried to clear out their prisons and yet every year they continue to have overcrowded prisons,” Avella said. “And the focus ought to be on a society that follows the law, not allowing people to defecate in the streets, not allowing individuals to lay on the street having just shot up with marijuana – or heroin and having a needle sticking out of them.”

Mediaite reporter Caleb Ecarma posted the clip to Twitter saying, “fox news is very worried about homeless people laying ‘in the street having just shot up with marijuana’”

There is no doubt that California is experiencing a homelessness and addiction crisis. In certain parts of the state, the homeless problem has turned into a public health issue as well, as many homeless people struggling with addiction have resorted to using public sidewalks as personal toilets.

However, it appears that instead of addressing it with actual solutions like the construction of tiny homes or rehabilitation centers or allowing free market solutions, authorities have turned to the police state. They are now promising to arrest homeless people for merely being in the wrong part of the town—a “solution” Avella would likely advocate for as a means of removing those dirty marijuana injectors from the streets.

This type of reefer madness from folks at Fox is and has been extremely entertaining over the years. However, it shows just how propagandized some people are.

In December, TFTP reported on Fox and Friends claiming that marijuana is “killing people everyday.”

Fox and Friends was covering the story out of Mulberry, Florida in which a 12-year-old kid handed out THC gummies in a gym class at his middle school. At least five of his classmates went to the hospital with symptoms one would expect from a child ingesting marijuana—such as stomach pain, dizziness, and nausea.

Local media ran with the story, claiming all the kids were hospitalized and made it seem like it was the end of the world. And, while it is certainly a terrible idea for a child to eat a THC gummy, it is most assuredly not the end of the world—as marijuana has never killed anyone, ever. All the kids are now fine and the child who gave them the gummies faces seven felony charges for possessing and distributing marijuana.

After hyping up fear about the kids eating gummies, the folks at Fox & Friends went on to demonize marijuana in general. As if he had channeled the ghost of Henry Anslinger, Fox & Friends co-host, Brian Kilmeade began spewing ignorant lies and assertions, straight out of the 1930’s.

“No one talks about this — THC is addicting,” Kilmeade said. “I know so many people, they say they were told one thing and they end up getting addicted to it. That is an addicting substance. There is a price to pay for pot.”

Polk County Sheriff Grady Judd then expressed his agreement and went further—claiming that marijuana is literally “killing people every day.”

You can’t make this up.

Months before they claimed marijuana was killing people, Fox News’ Medical ‘Expert’ and A-Team member, Dr. Marc Siegel went on a rant on how “regular marijuana use carries significant health risks.” Out of the gate, the “expert” falsely claimed that fatal car accidents involving pot have doubled since legalization.

As TFTP reported at the time, a study published by the American Public Health Association found that states with legal medical cannabis have lower rates of traffic fatalities than states with full prohibition. The researchers analyzed 29 years of data in the Fatality Analysis Reporting System.

Toward the end of the show, the host showed just how ridiculous their propaganda piece was by talking about having some Catholic bishop who claimed to be addicted to marijuana. Listening to the host explain the addiction was outright hilarious.

“He (the bishop) would smoke marijuana and he wouldn’t get a high off of it,” said the host before becoming the subject of one of the most hilarious anti-reefer madness memes to ever make it on to the internet.

“So he’d have to smoke another ONE,” she said. “And another one, and another one. And, he’d smoked four (marijuanas) in one sitting.”

Perhaps if the bishop would’ve been injecting those four marijuanas instead of smoking them, he’d be just fine. 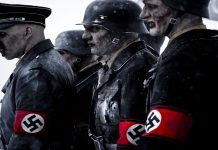 10 Myths about the Nazis