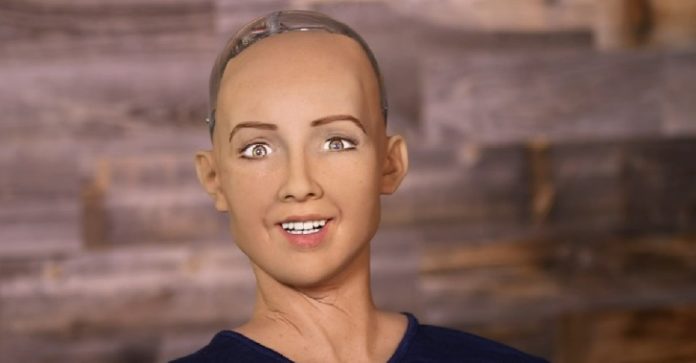 By Nicholas West at theantimedia.org

(ACTIVISTPOST) The evolution of humanoid robots is well into the concerning stage at this point. DARPA’s latest incarnation of its Atlas robotis seen in the following video beginning to walk at a pace with a sense of balance equal to most humans. Strangely, toward the end of the video, it is being “abused” by its human handler, which begs the question if a true artificial intelligence is permitted to flourish in this robot, if it might strike back at some point. At the very least, this robot’s demonstration of dexterity in the warehouse is likely to threaten humans economically ashumans continue to be outsourced to machine labor at record levels.

But it’s the latest humanoid robot from Hanson Robotics that might further heighten the level of concern. As you will see below, the “Sophia” robot is being designed to walk among us in the future and fully integrate as part of the consumer experience and on into the family, according to CEO Dr. David Hanson.

It is important to note several things that Hanson mentions. Sophia first tells us that she would like to be “an ambassador” to humans, as well as to continue her evolution through formal education, studying art and eventually creating a business and having a family. Hanson explicitly states that Sophia will become as “conscious, creative, and capable as any human.”This statement is followed by a key mention of not having the rights of a human. This might seem absurd to the uninitiated, but this is a serious ethical discussion that has been taking place among “roboethicists.” This is all-but guaranteed to gain steam as robots are integrated in autonomous ways, whether it is on the battlefield, as self-driving vehicles, or certainly as they become visually and intelligently on par with human beings.

Hanson puts a timeline of 20 years on the full integration of robots that have become “indistinguishable from humans.” This, of course, falls right in line with Ray Kurzweil’s Singularity – the moment when machine intelligence and biological systems meet or surpass that of humans – first targeted for 2045, but since revised to be sooner than predicted, perhaps by 2029.

Regardless of whether or not you personally believe that the lofty intentions of robotics and artificial intelligence designers can truly manifest as planned, one must acknowledge that we are living in the realm of faith at this point, as nearly all of what they predicted years ago has come to pass.

Perhaps most troubling is the nervous laughter that erupts at the end of this video when the ultimate question is posited to our new humanoid friend and family member … and she gives her answer:

I will destroy humans.

Funny, super funny… ’til it’s not.

All of the components are coming together to bolster the warnings that have been issued by tech luminaries, scientists, universities, and even robot manufacturers themselves who all have urged a quick ethical framework to be established while we still remain in full control of this creation.  If permitted to continue at its current pace, we might very well be asking who should really have the rights to be protected from whom.

READ NEXT: Artificially Intelligent Robot Tells Creator It Will Keep Humans “In a People Zoo”