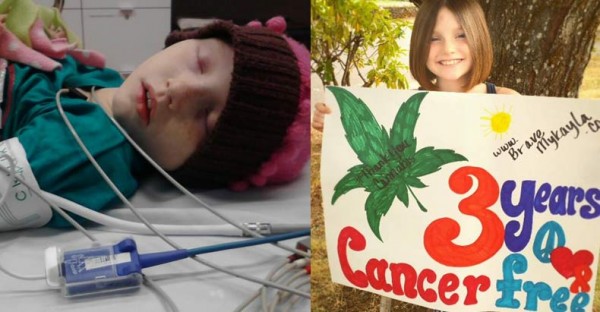 A little girl from the state of Oregon, in the United States, has told a remarkable story about how cannabis oil suppressed her Leukemia, after she used the oil for only six days.

According to the Free Thought Project, Mykayla Comstock was diagnosed with cancer at the age of seven. This happened after she began showing symptoms, including a hacking cough, body aches, fever, night sweats, and a rash across her legs.

The first doctor who treated her placed her on antibiotics, but her condition continued to deteriorate. Upon seeing a second doctor, it was discovered that a large mass was in the young girls chest, pressing against her internal organs. After enduring spinal taps and bone marrow biopsies, she was diagnosed with aggressive T-cell acute lymphoblastic leukemia. To treat the symptoms of her daughter’s chemotherapy—nausea, loss of appetite, and restlessness—Mykayla’s mother, Erin Purchase, started giving her a gram of cannabis oil each day. Mykayla is said to usually ingest the cannabis either in the form of a pill or a brownie baked with marijuana-laced butter.

Mykayla’s mother was able to use the cannabis oil because, under Oregon law, pediatric cancer patients are allowed to treat the symptoms of cancer and the side effects of chemotherapy with medical marijuana if the children have parental consent and a doctor’s approval.

After only six days of using the oil, Mykayla’s condition improved. The treatment eased the physical and psychological pain she was going through. Her mother credited the plant for helping to save her daughter’s life. Even the National Institutes of Health has confirmed that cannabis has been studied in the clinic. During these studies, it found that cannabis may aid in treating the symptoms of cancer and the side effects of cancer therapies. It has also been shown to kill cancer cells in the laboratory.

The American Cancer Society has called for more scientific research on cannabinoids. The organization was quoted as saying “for better and more effective therapies that can overcome the often debilitating side effects of cancer and its treatment. The Society also believes that the classification of marijuana as a Schedule I controlled substance by the US Drug Enforcement Administration imposes numerous conditions on researchers and deters scientific study of cannabinoids. Federal officials should examine options consistent with federal law for enabling more scientific study on marijuana.”

In addition to these arguments put forward, the CBD Farm has also said hundreds of studies, along with anecdotal evidence, suggest that cannabis oil helps in the treatment of a wide range of medical conditions, including cancer, Alzheimer’s, epilepsy, Lyme disease, chronic pain, rheumatism, multiple sclerosis, anxiety disorders, asthma and diabetes. Many other people have also testified what cannabis oil has done for them, treating many diseases they thought would prove difficult to cure.

This Article (Watch How A Girl’s Leukemia Went into Remission After Only Six Days Of Using Cannabis Oil) is free and open source. You have permission to republish this article under a Creative Commons license with attribution to the author and AnonHQ.com.