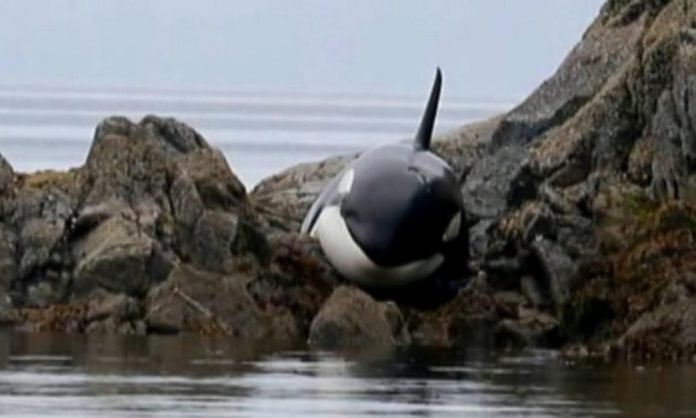 An orca whale was stranded in British Columbia for six hours on rocks before it could be saved as a tide came in.

After two stories surfaced within a matter of weeks of ignorant humans contributing to the suffering – and eventual death – of a baby dolphin and shark, news of humans helping ocean wildlife is heartening.

Of course, this story may be from 2015, but it’s worth sharing, nonetheless.

When an orca was spotted stranded on the Canadian shore, officials from the whale research facility, Cetacea Lab, rushed to the mammal’s side to assist.

According to CTV News, the killer whale was saved with what rescuers called a “[MacGyver-]type water pump” and plenty of manpower.

[The team] “put together a [MacGyver-]type water pump, we grabbed as many sheets as we could. It was a team effort, and fortunately on some level this transient orca understood that we were trying to help.”

For six hours, the team ran water over the orca to keep it hydrated until the tide came back in.

Note: They did not take selfies with the animal, as these fools in Argentina did. They merely did their best to help improve the situation.

Thankfully, their efforts paid off:

“She cried often, which tore at our hearts. But as the tide came up there were many cheers as this whale was finally free after [six-plus] hours of being stuck on this rock.”

This is a good example of what activists should do when they spot a marine animal close to shore and in need of assistance. Do you agree?

This article ([Watch] Incredible Rescue Of Stranded Killer Whale By Compassionate Humans) is free and open source. You have permission to republish this article under a Creative Commons license with attribution to the author and TrueActivist.com