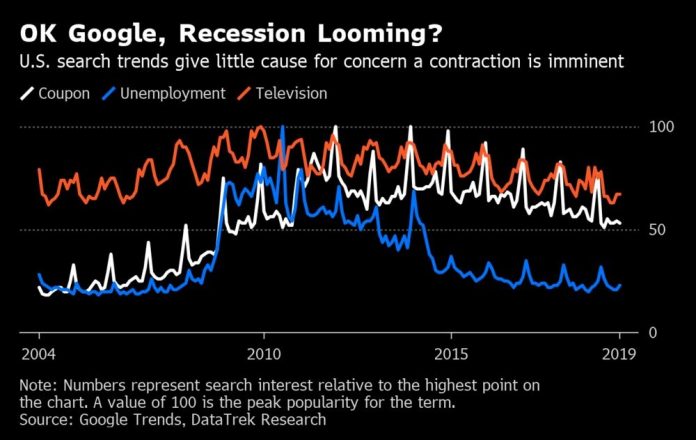 Submitted by Nick Colas of DataTrek

Today we add domestic Google search volumes to our ever-growing list of US recession indicators and find that the US economy still looks pretty solid. Searches for “coupon” continue to decline (and feed the Fed’s concern about subpar inflation). Queries for “unemployment”, which led actual joblessness in 2007, are flat/down. Searches for media (TV, YouTube and Netflix), which also led traditional economic indicators in 2007 (because fewer overtime hours means more media consumption), are declining.

(Zero Hedge) We have had a great response to our “Recession Predictors” reviews over the last 2 weeks, showing this is a top-of-mind topic for many of you. Once we log a few more we will do a reprise of what they collectively have to say.

Today we continue the theme with a look at the volume of specific Google search terms that were leading indicators of the Great Recession. Since Google was much less ubiquitous pre-early 2000s, we really only have 2 economic cycles of data to consider. Google Trends itself only presents data from 2004 to the present.

Here are relevant 3 search terms we found with charts of the Google Trend US data for each:

#1: “Coupon”. Our rationale for thinking this is a leading indicator is that US consumers will start looking for product/service discounts as economic uncertainty increases. Deferring or eliminating purchases – what traditional indicators measure – comes later, once unemployment is actually rising.

#2: “Unemployment”. People search for this term when they fear a layoff is imminent, allowing Google Trends to act as a useful leading indicator. Both the weekly initial claims data and the monthly Jobs report only capture employment trends after layoffs start.

#3: “TV” and other media sources “YouTube” and “Netflix”. When overtime hours get cut back, workers have more time to consume media. In 2007 that would have meant Googling for “TV” shows. Now we must include other sources of home entertainment like “youtube” and “netflix” in our analysis.

Summing up: if the Federal Reserve looked at Google Trends they might not be so inclined to cut rates next week. OK – maybe declining “coupon” searches does feed their concern about subpar inflation, and that’s fair enough. But taken as a whole these 3 indicators give us little cause for concern just now.