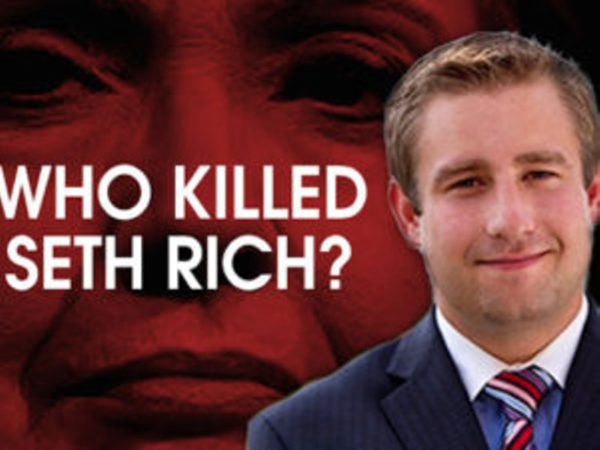 The international non-profit journalistic organization that publishes secret information, news leaks, and classified media from anonymous sources, WikiLeaks has announced that it is offering up to $20,000 for information leading to the arrest of the person who murdered the Democratic National Committee (DNC) staffer, Seth Conrad Rich.

Mr Rich, 27, was gunned down in the affluent Bloomingdale neighborhood of Washington DC  on July 11th, 2016 while he was on phone talking to his girlfriend.

ANNOUNCE: WikiLeaks has decided to issue a US$20k reward for information leading to conviction for the murder of DNC staffer Seth Rich.

The police have suggested Rich might have been killed in an attempted robbery against him. But Rich’s family have insisted that could not be possible, because when he was killed, nothing was taken from him. Rich’s lifeless body was found covered in bruises on the 2100 block of Flagler Place NW. His family said he had his watch, cell phone and wallet on him. This raises questions on the police assertion that he might have died during an attempted robbery.

The police have offered $25,000 for information leading to the arrest of the killer. So far, the police said they have found no clues to his gruesome killing. However, as the police claim not to have any lead to his death, some people have. Conspiracy Theorists have theorized that Rich fed Wikileaks the DNC emails that were released at the start of the Democratic Party’s Convention, which made damning revelation that top officials of the party were biased toward Bernie Sanders’ campaign to become the nominee of the party. It is said Rich developed a relationship with environmentalists supporting Sanders. It was revealed further that the Clintons felt insecure by the actions of Rich, and decided to eliminate him, since he has been a thorn in their flesh. Some even revealed he was on his way to speak to the FBI when his killer shot him. These are the claims making rounds online.

However, it must be noted that when the DNC emails were leaked by WikiLeaks, the founder of the organization, Julian Assange suggested that the leak may have been the work of an insider. Mr Assange told DemocracyNow he didn’t know the identity of the people who had access to the emails. He added he wouldn’t even reveal their identities if he knew. Again, in an interview with the Independent Television in the United Kingdom, Assange also said anyone within the Democratic organization could have had access to the trove of emails.

Explaining further why WikiLeaks has decided to offer financial incentive to help uncover who killed Mr Rich, the organization said in a tweet that the action it has taken, does not mean it was Rich who gave the DNC emails up for publication. WikiLeaks said it only felt obligated to do so, to help for the successful arrest and prosecution of the person who committed the heinous crime.

Washington Metropolitan Police Department Assistant Chief Peter Newsham said the police are ready to work closely with anyone interested in helping the police arrest the killer.

Our original and only statement on the murder of US Democratic National Committee staffer Seth Rich. #DNCLeak pic.twitter.com/Qsjfyb696p

Newsham  said: “We’re very pleased if anyone is going to assist us with giving reward money.”

Despite WikiLeaks’ reluctance to state emphatically that Rich was involved in the leaked emails it published, many observers suggest that Rich might have leaked the emails to Mr Assange and his team.

Friends of Rich have described him as a gentleman who loved people. In an emotional press conference, his parents appealed to the general public to volunteer any available information to the police in order for the killer to be arrested. “We want to find out who killed our son. if you saw anyone in the area… if you know of people that came home after 4.30am in the early morning’ on July 11 to report it to the police. Next time something like this happens, it might be someone you love. The only thing I can say as a mother is it warms my heart that he lived such a great life, even though it was cut short,’ she added. ‘I can always hold on to that,” Rich’s mother said at the press conference, holding back her tears.

Anyone with information about Rich’s death can call the police on 202-727-9099, or text anonymous information to the department’s tip line at 50411.

This article (WikiLeaks Announces $20,000 Reward for Information Leading to the Arrest of DNC Staffer Killer) is a free and open source. You have permission to republish this article under a Creative Commons license with attribution to the author and AnonHQ.com.