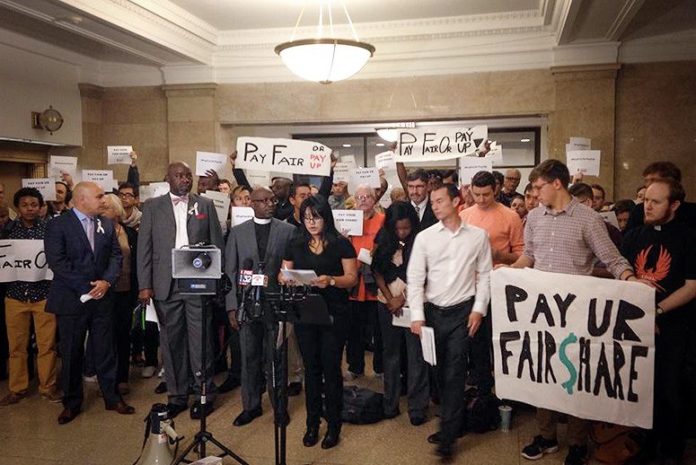 Low-wage workers in the United States are pushing corporations to pay their employees fair wages in order to reduce the pressure on social programs in the country.

Social programs in the United States are welfare subsidies designed to aid the needs of the country’s population.

According to statistics from the country’s National Employment Law Project, more than 25 million Americans rely on jobs that pay less than $15 an hour.

As a result, many companies have taken advantage of this low nationwide minimum wage level, and are paying their workers just a little above what the federal government has mandated.

This low payment is therefore driving many workers to rely on social-safety-net programs such as food stamps, and Medicaid in order to make a living. However, the social programs are funded by the American public. According to a study by the University of California, Berkeley’s Center for Labor Research and Education, American taxpayers spend around $153 billion each year paying for social programs for working families.

Currently, Berkeley’s minimum wage stands at $11 per hour. The city is planning to increase it to $12.53 per hour by October 2016. The Fortune reports that the Berkeley Labor Commission has proposed gradually increasing the minimum wage to $19 per hour by 2020. If this is passed, the rate would be higher than any city in the US.

Meanwhile, in the state of Illinois, companies are said to be paying wages that are not sufficient enough to cover food expenses and other basic living necessities. According to the Reuters News Agency, the Democrat-controlled Illinois Senate passed a bill in February 2015, to raise the state’s minimum wage to $9 per hour, and to $11 by 2019. However, the state’s governor, Bruce Rauner has said he is hoping to increase the minimum wage to $10 per hour over the next seven years.

“I make $10 an hour for the 25 hours a week I work, and that is not enough to buy food, pay my phone bill, and cover other necessities. Marshalls and other corporations assume that if they pay low enough wages, their workers will apply for social programs to cover the rest. They’re basically profiting off poverty,” Gianna Chacon, a 21-year-old, part-time college student and part-time employee at the big-box department store Marshalls in Chicago, Illinois told the Take Part  in an interview.

Chacon is one of many low-wage workers in the Cook County area, and each and every one of them is tired of struggling to make ends meet while the companies they work for make huge profits. It is said Marshalls’ parent company, TJX made more than $2 billion in 2015.

Workers and allied activists in the Cook County area have therefore joined the County Commissioner, Robert Steele to introduce the Responsible Business Act, a bill that aims to stop corporations underpaying their workers in order to reduce pressure on taxpayers.

The bill aims to charge a fee to corporations that have more than 750 workers who are paid less than either $14.57 per hour or $11.66 per hour with benefits, the county’s living wage. Activists say the fee would affect an estimated 67 companies, including Marshalls, and it could generate as much as $500 million over its four-year phase-in period.

Although the bill has yet to be passed, Chacon believes paying workers a low wage is a social issue which should be addressed by the general public nationwide.

“Whether or not you are working a low-wage job, someone you know right now is subsidizing this model that relies on poverty. It affects everybody,” she said.

This Article (Workers In US Are Demanding Corporations To Pay Fair Wages In Order To Reduce Pressure On Social Programs) is free and open source. You have permission to republish this article under a Creative Commons license with attribution to the author and AnonHQ.com