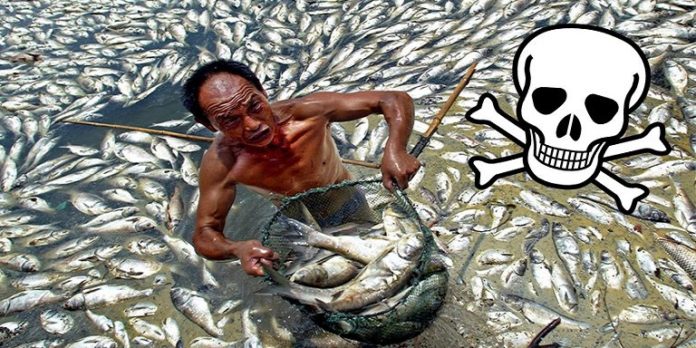 People everywhere are avoiding food imports from China, and it’s easy to understand why.

As the old adage goes, ‘‘you are what you eat.’‘ But once you find out how deadly your regular meals can be in China, that old adage gets a completely new meaning all of a sudden.

Yes, China managed to turn some of our harmless foods into a frightening test of one’s fortitude. And you won’t believe your eyes once you find out what these 10 deadliest foods in China are – starting with probably the most basic of them all – rice.

Made from fake synthetic resin, China is producing ”plastic rice” for mass consumption and according to some reports, long-term effects of this could be cancerous to the human body. When this rice is boiled, it won’t cook like naturally-grown rice. Instead, it stays tough and hard.

50% of American cod comes from China and as far as the fish that come out there goes, they’re unhealthy and living in their own waste, making them unsuitable for human consumption.

Another type of fish in China that is not advisable to eat. Since these fish are also living in their own waste and would eat just about anything, they’re some of the most toxic fish that can be served on your dinner plate. It’s also troubling that 80% of the tilapia fish in America come from China – this premise alone would make anyone rethink their food choices entirely.

If the billing of ”Chinese Apple Juice” doesn’t already bother you, the fact that China is the largest pesticide producing country in the planet should. 50% of the apple juice in the United States come from China so, unless you want to down a glass of rich pesticide, I’d stay away.

Sometimes laughably labeled as ‘organic mushrooms’ to increase profits, the stuff that come out of China were found to be tainted by U.S. inspectors and shouldn’t find their way to your households. 34% of processed mushrooms come from China so it is best to buy local and true organic food supplies instead.

Aside from mushrooms, the garlic that comes out of China were also found to be tainted. If you happen to have a foul taste in your mouth after eating garlic, chances are, you just ate a piece of the 31% of garlic exported by China to the U.S., tainted garlic rich with all sorts of chemicals that would make rocket scientists blush.

Who doesn’t love chicken? Unfortunately, China managed to screw that up too. Aside from the fact that China is known for its pesticides, the fact that it is a country where avian influenza and food-borne illnesses are common doesn’t do their chicken any favors.

Black pepper is typically used as spice or seasoning. But if you get your black pepper from China, chances are, you’ll be spicing up your food in an entirely different way because, according to reports, the black pepper that comes from China isn’t actually black pepper but mud. Yes, China is actually selling mud, passing them off as black pepper, which goes to show how they have little disregard for food safety and regulatory systems.

Industrial salt is unfit for human consumption and can cause both mental and physical issues, hypothyroid problems, and reproductive system disorders.

Aside from faking rice, it turns out that China is faking peas too. Made from snow peas, soy beans, and a dose of green dye and sodium metabisulfite, the ”green” peas that come out of China are cancerous and inhibit the human body’s ability to absorb calcium. And just like China’s fake rice, it stays tough and hard when boiled.

What do you think of the 10 deadliest foods in China? Will you still satisfy your craving for Chinese food after this? Let us know in the comments below and share this news.

This article (10 Deadliest Foods in China tainted by Plastic, Pesticides, and Cancerous Chemicals) is free and open source. You have permission to republish this article under a Creative Commons license with attribution to the author and TrueActivist.com.