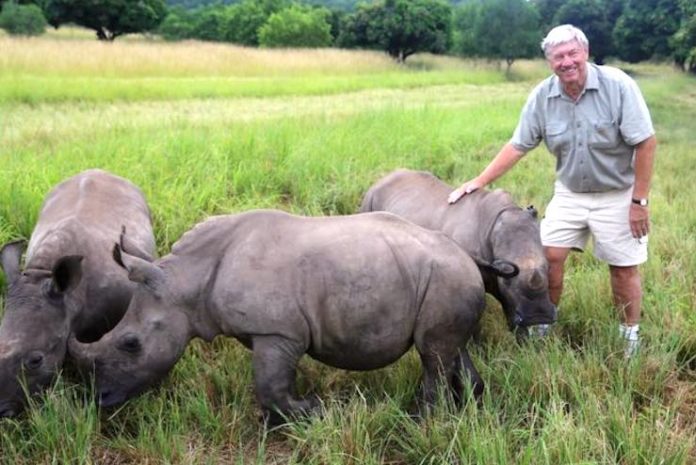 Ray Deerlove is creating a “seed bank” of endangered rhinos in Australia to save their species from extinction.

Most people spend their retirement traveling or learning new trades. This retiree, however, is using his golden years to help save an endangered species.

Former sales executive Ray Deerlove moved to Australia from South Africa 30 years ago. His fondness for the African continent – and its wildlife – never faded, however. Inspired to ensure that future generations have rhinos to care for, the activist launched an effort to have eighty of the endangered mammals routed to his adopted country.

You may be aware that a demand for rhino horn (which contains keratin, the same substance as your fingernails) has led poachers to hunt the animals faster than they can reproduce. In effect, the beautiful land animals face a dismal future. Deerlove believes that by moving the animals out of the reach of the illegal hunters, a biological insurance policy may be created.

Few would invest in such a project, but Ray is an exception. He intends for the animals to be airlifted 6,800 miles to Australia, a feat which will cost $44,000. Within four years, he hopes to reach his goal of bringing all 80 rhinos into the country.

Dearlove’s devotion to the endangered species inspired him to start the Australian Rhino Project in 2013. This organization helped raise the money for the rhinos to be relocated, as well deal with the logistics of moving the giant animals across the Indian Ocean.

In August, the first of the six rhinos will leave its home in Africa after a two-month-long quarantine. Then, it’ll spend another two months in quarantine before it is released in Australia in a secure safari park.

Why Australia? Deerlove answered that when he spoke to ABC News:

“I thought Australia is one of the safest places on the planet to start this breeding herd. With the eventual intention that they would be repatriated to Africa when those [poaching] issues are sorted out.”

Thankfully, Ray isn’t the only one putting in the effort to protect rhinos from extinction. Other activists include UK’s Prince William who pushed 40 countries to join a crackdown on transporting rhino horn. In addition, innovative minds have developed the technology to dye rhino horns pink to discourage poachers. Finally, conservationists are even putting ‘spy cams’ into rhinos’ horns to detect and capture illegal hunters.

This article (This Activist Is Flying 80 Endangered Rhinos To Australia To Protect Them From Poachers) is free and open source. You have permission to republish this article under a Creative Commons license with attribution to the author and TrueActivist.com